It was 5.20 pm on the evening of a day in late October 1982. Simon and his wife at the time, Chloe, were travelling home from Stafford after a day at work. They were driving along Eccleshall Road and had just passed through the village of Great Bridgeford. Immediately following the village was a stretch of road lined with trees and with farmer’s fields either side of it. Suddenly ahead of them off to the right of the road they saw a dark disc-shaped object. It appeared to be between 300-350 feet in the air, and was moving very slowly in a a South Westerly direction. At first they assumed it must be a helicopter but then they realised that it had no lights on.

Photograph on the stretch of Eccleshall Road where the UFO was first sighted: 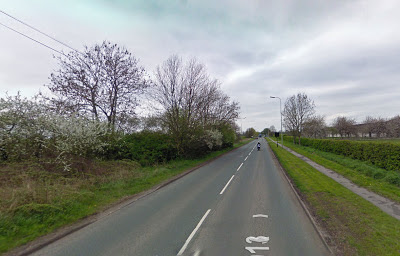 The witnesses began to drive closer to the object. As they got nearer they realised that it was a very dark pewter colour, and had no visible markings on it or protrusions of any kind. It was roughly 30 feet in diameter, and was only moving at around 10-15  mph. It passed across the road in front of them at an angle of around 45 degrees. Despite the fact that there were other drivers on the road, nobody else seemed to have noticed the object, or did but did not bother stopping. Simon pulled up the car in an open gateway.

Aerial map showing the location where the UFO was first spotted (A) and the gateway where the witnesses parked (B): 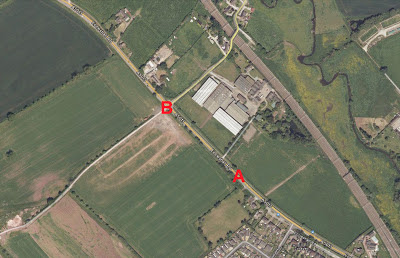 As they got out of the car to continue watching it, the disc suddenly stopped moving. It hung in the air completely silently. Then, without warning, a ring of segmented lights around the circumference of the base of the object appeared. The lights were multi-coloured and included red, green, blue and yellow, possibly other colours. They were flashing on and off in sequence giving the appearance of rotation. Simon does not believe the UFO itself was rotating. After about 15 seconds the UFO started moving again on the same course and at the same speed as before. They continued to watch it until it went out of sight.

Simon and his wife continued to watch the object for several minutes until it had gone out of sight. They were both amazed at what they had just seen, and also both felt like the UFO had stopped on their behalf so that they could get a good look at it.

Photograph from the gateway in the direction the UFO moved off in: 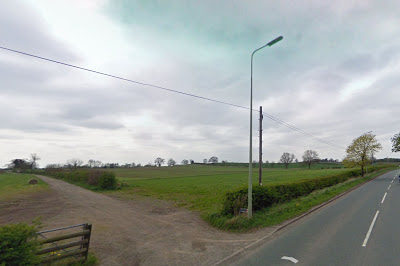 When they got back home, Simon immediately contacted their friend Tony who used to work for BUFORA. They were aware that he had an interest in the subject. They let him know about the sighting and immediately logged it. To Simon’s and my knowledge the report that was written up does not exist on-line anywhere, which is why I have decided to investigate this case.

Later on Simon was informed by his brother-in-law that there had been another UFO sighting on the same evening. Someone in Pershaw had seen a very low bright red light at around 6.45 pm, 1 hour and 25 minutes after Simon and Chloe’s sighting. Pershaw is only several miles away from Great Bridgeford. Perhaps this was another sighting of the same object at a greater distance.

This is a fascinating close encounter with what could well have been a genuine disc-shaped craft of extra-terrestrial origin. The fact that the object was moving on a steady course, then came to a halt in the sky just as the witnesses got out of their car, before continuing on its way, suggests that it was both under direct control and actually observing Simon and Chloe. It was clearly not a conventional aircraft of any kind, and was too large to have been a remote controlled model.

The disc shape of the object and the rotating multi-coloured lights which suddenly appeared on it mean it was very unlikely to be a large inflatable object such as a blimp. We can only speculate as to the reason for these lights. It is interesting that they started while the witnesses were looking up at the object. This may suggest that they were putting on some kind of display on purpose. Or perhaps this was merely coincidence, and the lights served some other function. I have investigated other cases where disc-shaped craft with revolving lights around the rim have been observed, including abduction cases. Other than the sudden appearance of the lights, there is no evidence that the witnesses had any direct interaction with the craft or its occupants on this occasion.

Due to the striking lighting configuration on the UFO, it is possible that there may have been other witnesses elsewhere who are yet to come forward.

This is not the only UFO sighting that Simon has experienced. In October 2012 he saw what may have been a Flying Triangle craft while on route to Fradley. There is a seperate case report which covers this incident.