On the evening of 10th October 2012, Simon (name changed for reasons of anonymity) was on his way to the village of Fradley near Lichfield to give a talk on his artwork. It was a clear evening, quite cold but with very little cloud cover. He was travelling North East along the A38 and approaching the turn on the left which leads to Fradley. Unfortunately he missed the turning so had to carry on and turn round at the next junction. On the way back down on the other side of the A38 he could not access the turning directly but there was an alternative route accessible from Fine Lane.

As he approached Fine Lane he noticed something in the sky over the fields to his left. It looked like a delta-shaped craft, triangular in shape but with squared off points to the rear. On the base of the object he could see some three yellow-white lights in a row towards the centre. There appeared to be no other lights on the object. It was around 7pm, and the object was silhouetted against the darkening sky. He could not tell for definite what colour it was but it appeared to be black. The object was at a height of between 500-1000 feet, and appeared to be roughly ¼ mile from his location. Simon estimates that it was a little bigger than a light aircraft, perhaps 40 feet across.

Photograph from the A38 in the direction the UFO was first observed: 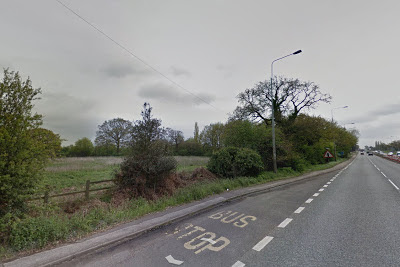 Simon's drawing of the UFO and surroundings: 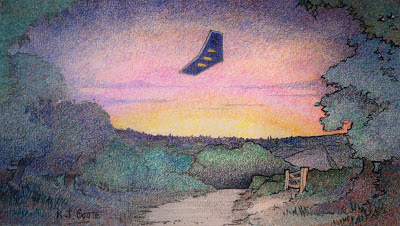 The object was moving in a Southerly direction roughly parallel to the road. Turning into Fine Lane, Simon parked up at the edge of the road. He got out of the car. Nearby was a man with a steamroller but Simon did not point out the object to him, he was too busy watching it himself. By this time the object was at an angle of about 30 degrees in the sky, and had begun to turn towards the South East. As it did so it banked and he was able to get a better look at the underside of the object. He saw a straight line of three white round dimly-lit lights in the centre of the base. He also noted that the object was completely silent. He observed it for a short while longer before it got lost behind some nearby trees. In total he had watched it for about a minute.

Photograph from Fine Lane where the witness parked and continued to observe the object: 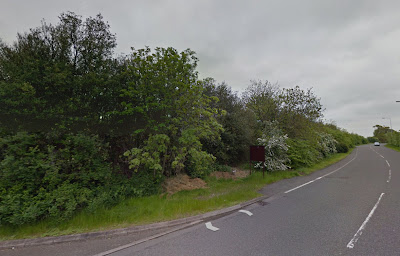 Aerial map showing the location of the missed turn off to Fradley (A), where the UFO was first spotted (B), and where the witness parked (C): 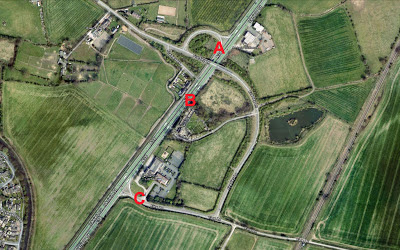 After it had gone Simon got back in his car and continued his journey to Fradley. He was intrigued by what he had seen due to the unusual shape and lighting, and the fact that it appeared to be silent.

It seems quite clear that what was observed was a craft of some kind performing controlled manoeuvres, rather than a randomly drifting object. Some of the aspects of this particular sighting tend to suggest that what was seen was some kind of military-owned aircraft. The object was not of excessive size. It did not perform any manoeuvres which a human-made aircraft would not be able to make. When it changed direction it banked and turned rather than just altering direction. However the appearance of the object was not like any known military aircraft. Both the shape of the object and the lighting seen on its underside do not match any aircraft which I am currently aware of. Also the witness mentioned that it appeared to be completely silent. He was within ¼ mile of the object so surely it would have been possible to hear sound coming from it if there was any?

It is not possible to say at present whether or not this object was some kind of secret military aircraft or a genuine Flying Triangle of extra-terrestrial origin. The squared off corners at the rear of the craft do not fit with many triangle cases I have looked into, and the lighting seen on it again is highly unusual and not a configuration I have heard of before off anyone else. The area of Fradley is quite rural so the possibility of a military aircraft cannot be ruled out. If you feel you can shed more light on what this craft may have been please get in touch.

This is not the first time that Simon has seen a UFO. In 1982 he and his wife had an impressive sighting of a disc-shaped UFO close to Great Bridgeford. I have created a separate report on this incident.