At 6.30am early in the morning of 27th November 2010, Julian Andreano and his girlfriend Michelle were about to get some sleep after staying up most of the night watching DVDs at Julian’s house on Renfrew Close, Wordsley. It was still dark, and just before getting into bed, Julian pulled back the blind on the bedroom window to peer outside. He looked out over the back garden of the house. It was a clear but cold morning with frost on the ground, and the moon was visible in the sky. 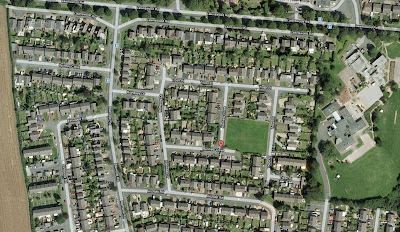 Suddenly Julian noticed a light enter his view from the window to the left. He looked and saw what appeared to be a spherical shaped object with flames running through it. The object was about 40 feet in the air and was about 50 feet from his location. It was moving on a straight level course at about 20-30 mph, heading in an Easterly direction.

Julian called Michelle to come and have a look at the object. She walked across the room and looked out. By this time Julian had been watching it for about 10 seconds. Michelle just about caught sight of the object when suddenly it massively increased in acceleration and shot away, increasing in altitude as it went. Julian estimates it moved at over 500 mph. Within 8 seconds it was a dot on the horizon and vanished out of sight.

Witness drawing of the UFO and the route it took: 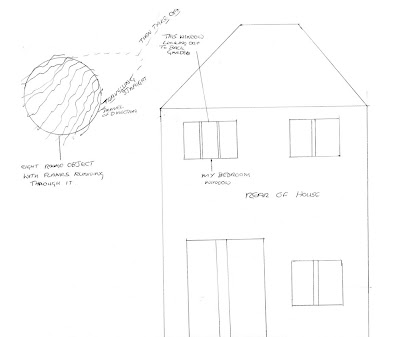 The couple discussed what they had just seen. Julian felt privileged and excited to have seen such a thing. He felt that it was definitely something out of this world. Later in the morning he spoke of the sighting with his parents, who believed him and were as intrigued by it as he was.

This is a very interesting sighting due to the manoeuvres displayed by the object. Usually sightings of orange or fiery orbs of light can be put down to Chinese lanterns. However the object seen in this case does not appear to have been a lantern due to the massive increase in speed that it suddenly performed. Even if it was caught in a strong gust of wind it would not have moved at the speed described by the witnesses. It also appeared to be quite close to the witnesses’ location, if it was a lantern this would have been quite obvious. The time the object was seen at also suggests it wasn’t a lantern. It is possible that one could be launched at this time of course, but usually lanterns would be launched from celebrations either late evening or in the early hours of the morning, not just before sunrise.

As it was moving quite slow at the start of the sighting it cannot have been a meteorite. It was clearly not a conventional aircraft or helicopter. It is very unlikely to have been an earth light, as these do not appear over populated areas.

Could the object have been a genuine advanced craft of some kind, perhaps an unmanned scouting craft? I feel that this is a possibility that must be considered in this case, due to the points mentioned above. Perhaps the flames seen were some kind of energy field around it, or perhaps it was actually burning hot. But there is still the chance that it was a lantern and that it appeared to be moving much faster than it in reality was. We will probably never know for certain, and due to the time of morning the sighting occurred at it is unlikely there were many, if any, other witnesses to it.

Julian has also had a sighting of a light grey sphere in June 2021. Click here to go to the case report.