Most modern sightings of orange orbs seen in the sky after dark tend to be explainable by Chinese lanterns. However occasionally there are aspects to these sightings which cannot be explained so easily. This is one such sighting.

It was 6pm on an evening in the winter of 2010. It was a clear and mild evening for the time of year, and there was a South Westerly wind blowing about 4 mph. Stephen Notti was in his house on Hudleston, Cullercoats Bay, North Tyneside. He was sitting in the living room watching TV. The front window blinds were open, offering a view to the South. 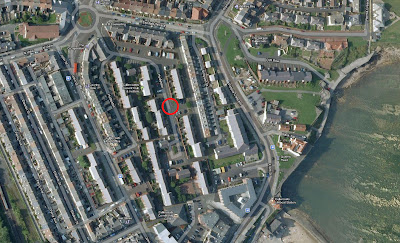 Suddenly he noticed through the window an orange orb of light in the sky, which had seemingly just appeared from nowhere. He immediately stopped watching TV and stared at the object. It appeared to be pulsing in brightness, and Stephen estimates it was twice the size of a jumbo jet. As he watched it seemed to descend directly downwards at quite a fast speed.

Then he noticed a second similar object appear and once again descend. Both objects continued to descend until they were about 600 feet off the ground. They then briefly halted. Next one of them went to the left, where as the other moved to the right, almost like they were searching for something. They then moved back together again. Next one of the orbs started moving to the East towards the sea, and a second later the other orb followed.

Stephen continued to watch the lights. They moved about half a mile out to sea then briefly stopped. They then once again switched course and headed in a Southerly direction until out of sight. In total he had watched the objects for about 20 seconds.

The appearance of the objects in this sighting certainly fits in with them being Chinese lanterns. These appear as orange glowing orbs at a distance, and often appear to pulse/flicker in brightness due to the lit flame inside them. It is hard to accurately estimate their size, and sometimes the bright glow coming from them can make them appear to be much bigger and more distant than they in fact are.

That said I find the movement pattern of the objects in this sighting very interesting. Lanterns tend to either drift randomly and slowly rise when there is no wind, or if there is wind they tend to float on a straight course across the sky, again slowly ascending due to the heated air inside. However it appears that in this case both objects initially descended, something lanterns only tend to do when they are going out. Also they both seemed to appear from nowhere. It was a clear night so surely Stephen would have seen them both drift into view not suddenly appear?

We must also take into account that once the objects had descended one headed one way and one the other. Stephen says that there was a South Westerly wind blowing, so it would be expected that both objects would have drifted in this direction, yet neither appeared to.

Throughout the sighting they appeared to be following their own defined paths rather than just drifting in the wind, and it is for this reason that they may have been something other than lanterns.

Interesting that the movements are, it cannot be denied that the appearance of the objects fits with lanterns. Therefore this cannot be completely ruled out. Perhaps at higher altitude the wind was blowing in different directions causing the objects to be buffeted around and seem to perform intelligent manoeuvres. So it is hard to say for definite exactly what the objects were, there is arguments both for and against the lanterns explanation. At the end of the day it’s down to what you feel is the most probable.