Christina lives in Wimborne, Dorset, with her husband Robert and two children Stuart and Jenny. For the last few years there have been a number of unusual incidents involving spherical UFOs, orbs and other unexplained activity. These events have been witnessed not only by Christina, but sometimes by other members of her family as well. They suggest that either her or her family may be experiencing indirect extraterrestrial contact.

In 1970 when Christina was just 2 years old, her brother and father both saw a strange glowing UFO hovering over their house in Bournemouth. One November evening her brother was outside when he witnessed a glowing orange spherical object in the sky. It appeared to have unusual appendages hanging down underneath it, almost like the tentacles of a jellyfish. He called out his father to also see the object. At the time of the sighting Christina was sleeping upstairs in her room.

Apparently the same object was spotted by other witnesses around Bournemouth and Poole, and it was even in the Bournemouth Echo newspaper. Christina's father and brother would often talk of this incident over the years.

It was a Friday morning in August 2007. Christina had been out with her parents to the weekly market in Wimborne, where they too live. It was 10am and she had just left her parents house on Martindale Avenue. It was a sunny day with a mostly clear blue sky, but as she walked down the drive way she noticed an imposing large dark cloud travelling in an Eastward direction. 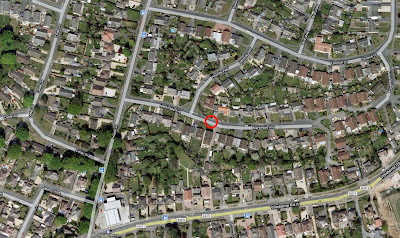 Christina was just getting into her car when she looked up into the sky one final time. It was then that she noticed a silver coloured spherical object just behind the dark cloud. It was highly reflective and catching the sun’s rays. It appeared to be about a mile from her position and was at an angle of about 80 degrees in the sky. The object looked solid and Christina could not see any markings on it or means of propulsion. She estimated it was quite small in size, but due to the distance involved it must have been at least a few feet in diameter.

Drawing of one of the spheres based on witness description: 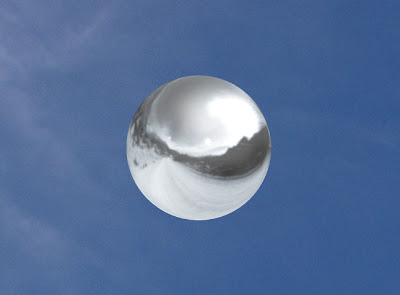 At first the object was wobbling about in the air. Then it proceeded to dive down below the cloud, and then climb back up above it. It was at this point that a second silver sphere, identical to the first, emerged from within the cloud. Christina continued to watch in amazement as the second sphere started dancing around the first in a circular motion. They clearly looked like they were under intelligent control, and Christina knew she was not looking at balloons randomly drifting in the air. She also felt they were highly unlikely to be radio controlled models. The objects seemed interested in the dark cloud for some reason, and remained quite close to it at all times.

Christina continued to watch the objects, and after about a minute suddenly they both flew into the cloud and were lost from sight. She waited and watched a while longer but they did not reappear. She felt that she had definitely seen something out of the ordinary, either some bizarre weather monitoring devices or alien spacecraft.

After the sighting Christina told her parents, her husband Robert and another close friend. They all seemed to believe her story. Her husband asked her about the incident in quite a lot of detail and suggested possible alternative explanations, but none of them seemed to fit what she had witnessed. Later she told other people too, but they just told her she must have imagined the spheres. When she rang up one of her close friends and told her about what happened, her friend informed her that she too had seen an unusual dark cloud over her house in Poole, quite possibly the same cloud. However she had not seen any spheres. Christina decided