In July 2011 Tim (name changed for privacy reasons) got in touch with me via Richplanet.net to report a very interesting incident which happened to him back in October of 1997 or 1998. The incident included the sighting of numerous unidentified beings, two UFOs and missing memories. This report covers the incident and speculates what may have taken place.

At the time of the incident Tim was on a camping trip with his family and friends in the Lake District. They had set up camp on a hillside along the northern edge of Ullswater. It was late evening and the weather was clear. Tim was sitting next to the campfire. Everyone else had gone to sleep in the tents. The only light source was the fire itself. The site was surrounded by trees.

Aerial map of Ullswater showing the rough location where the group were camped: 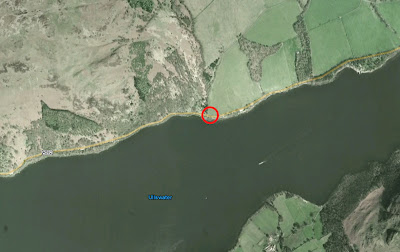 Tim suddenly noticed some movement quite close by off to his right. He looked into the darkness but initially could not see anything. He thought it must be his eyes playing tricks on him so he looked away. When he looked back a second time he made out several figures standing in the shadows underneath one of the trees. To the right of the tree appeared to be tall figure of medium build. They appeared to be wearing a hooded cloak which went right down to the ground. To the left of the tree were two very short beings which looked about knee height. It appeared to Tim that the tall being was in charge and the two short ones were waiting to be ordered to do something. It was too dark to make out any details on the figures.

The tall figure had one arm raised and was beckoning him with its finger, similar to how an adult would do with a child. Tim started at the figures a short while, then dismissed them and turned away. He thought maybe he was tired and having some sort of hallucination brought on by this, although he did not physically feel tired or else he would have gone to bed along with everyone else.

The next thing he became aware of, he found himself standing in a clearing a short distance away from the campsite. He knew of the clearing as it was the best way to gain a view of the lake. He was looking across Ullswater to the South South East. On the far side of the lake he could see two glowing blue egg shaped objects. They appeared to be self-luminescent, and did not light up the surroundings.

The objects were skimming through the air between the peaks of two mountains. They appeared to be about 60 feet in the air. They were travelling quite fast, at least 70 mph, and moved up and down in a wave like motion as they went.

Perspective map of Ullswater showing the approximate location of Tim, and the two mountain peaks on the other side of the lake: 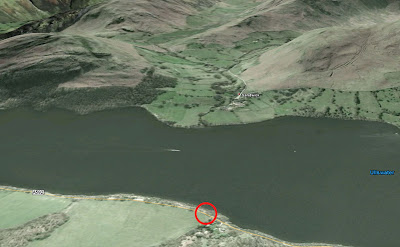 Photograph of Ullswater in the direction the UFOs were seen, with the estimated route of the objects shown: 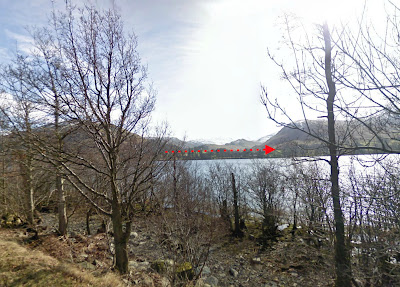 Tim cannot remember anything else that took place that night. The following morning he awoke to find himself outside alongside the camp fire. He remembered both the beings by the tree and the glowing egg shaped objects. He went over to the tree where the beings had been but there were no footprints, so he did not mention it to anyone else. The whole incident seemed like a vivid dream.

The events that Tim remembers are very interesting indeed, and there are a number of aspects which suggest that he may have experienced contact, and possibly even abducted. He only saw the silhouettes of the beings but the details he did make out are important. Tim states that there was a tall being wearing what looked like a hooded cloak, and two very short beings. Many contactees have reported seeing hooded figures appear in their room prior to an abduction experience. Could it have been one of these beings? The very humanoid looking species known as the Nordics are often reported as wearing hooded robes, so perhaps it could have been a Nordic.

The shorter beings could well have been two Grey beings. Greys are generally about 3-4 feet in height. The beings that Tim describes were very short indeed, no higher than 2 feet. However the height of Greys does tend to vary quite a lot so this cannot be put out of the question.

Could the figures have been nothing more than some people playing a prank on Tim? This seems unlikely for a number of reasons. Tim says the area where they were camping was quite remote and nobody would have known they were there. If they were people joking around then two of the three would have to have been young children due to their very short height. It is highly improbable someone with two young kids would have been sneaking around the campsite late at night. Also why would they just stand there and beckon for Tim to approach, and then when he turned away just leave the area without doing anything else. If they wanted him to approach surely they would have spoken and asked him directly?

We must also take into account the fact that it was at this point that Tim appears to have lost some time. If they were just people playing around then surely Tim would have recalled what happened next and just gone to sleep like normal? He certainly would not have gone wandering off away from camp to the clearing where he next found himself. After turning away from the figures, the next thing Tim remembers is overlooking the lake and seeing the UFOs. This suggests two things. Firstly it suggests that the two incidents were linked. And secondly it suggests that something else took place between the two, something which had been wiped from his conscious memory. It is very common for contactees to report missing time. The ETs have a way of blocking out memories of the experience, probably to reduce the trauma of the individual.

The glowing egg-shaped objects that he remembers seeing are again very interesting. Due to their speed of movement I feel it is unlikely they were blue LED balloons, hot air balloons or other lit inflatables. Tim seems to be describing two fast moving, controlled solid objects. They were clearly not conventional aircraft or helicopters. UFOs often are seen to glow after dark, probably due to the energy field projected around them. Could this image of him standing in the clearing watching the UFOs be a fragmented memory which has returned to him? Tim has said that this feels like a vivid dream, and this is often the way that these memories can appear.

Another possibility is that one or both of the incidents was nothing more than a dream. Perhaps the darkness combined with shadows cast by the firelight caused the illusion of figures standing nearby. Maybe the movement Tim sensed nearby was nothing more than an animal moving in the undergrowth. Perhaps he then dropped off by the fire and had a dream which happened to be of UFOs. Maybe both the beings and the UFOs were dreams. Tim certainly spent at least some of the night sleeping outside as this is where he found himself when he awoke in the morning. However it seems a little unlikely that he would first see unusual figures nearby which could be interpreted as ETs, and then following this have a vision of UFOs.

I have recommended that Tim is regressed to see if any further information about the incident comes to light. There are many elements to this incident which suggest that something unusual took place, something perhaps involving ET contact. If Tim decides to be regressed at some point the results of this will be added to the report.