Daryl Winston (name changed for privacy reasons) lives in Thirsk. He initially decided to contact Nick Pope about his experiences. Nick often hands over contact related cases to me for investigation, so forwarded Daryl to me. Since a young age Daryl has had strange experiences which he believes could be linked with alien abduction. This report will cover these experiences in depth and discuss the possibility that contact is taking place.

For many years Daryl has felt like he is constantly being observed by an unknown presence. This feeling becomes more obvious when he is alone and not distracted. It is worse at night, and Daryl often finds it very hard to get to sleep. He often feels like something is going to come and get him during the night, and this has led to him being afraid of the dark. He always closes his curtains, and feels that if he opens them there will be something outside staring in at him. While he is in bed he gets easily spooked by strange noises around the house, and will often put a fan on in his bedroom to drown out any other sounds.

Contactees often feel like they are being observed, and it is possible that they subconsciously sense the presence of the ETs watching over them as they go about their life. Many contactees have a fear of the dark. This is usually down to the fact that they are aware that they have been taken during the night-time, so whenever it is dark and they are alone they feel very uncomfortable.

Since an early age, but more regularly during the last few years, Daryl has experienced paralysis during the night. This occurs sporadically, but will usually happen around 3am in the morning. He awakens to find that he cannot move. When he tries to shout for help from his girlfriend lying next to him, nothing comes out. These incidents seem to last only a short moment, but afterwards when he checks the clock it always says 4.30am. He has noticed that this time appears to be repeating time and time again, and he never has any recollection of where the last 90 minutes have gone. After these experiences, Daryl feels like his body is drained of energy. He has experienced this at numerous different properties as well as his current address.

In late May 2010 one particular incident would absolutely terrify him. He awoke in the night much like usual, and once more found he could not move. However he then began to lift vertically off the bed and drift across the room in the air! As he went past the base of the bed he saw a shadowy short being below him. He could not make out any details of this being, it just seemed to be watching him as he moved by. He floated towards the open window feet first and his lower legs actually went outside. At this point he blacked out. He then came round and found he was back in his bed. He felt like he had gone somewhere but he could not remember anything else taking place.

Daryl informs me that both of his parents have also had similar paralysis experiences. These experiences could well be due to the condition known as sleep paralysis and nothing to do with ET contact. Some of the things Daryl has spoken of do seem to fit in with side effects of this condition. However I do find the floating experience to be very interesting indeed. I have not heard of anyone with sleep paralysis actually experiencing themselves float across the room and partially out of the window. It is possible to get a lifting or sinking sensation during sleep paralysis but Daryl had his eyes open and was convinced he was actually floating. It is also interesting that on this occasion he also saw what appeared to be a short humanoid figure near the base of his bed. Contactees have often reported being visited by ET beings, who often stand around the bed of the individual staring down at them. Perhaps it is a mix of both – it is possible that Daryl suffers from sleep paralysis but could also be a contactee. However I feel that this scenario is unlikely.

Contact also often runs through generations of a family blood line. It is not really known why, but it seems probable that the ETs are interested in our genetics and how they change over different generations. It is interesting to note that Daryl’s mother has also had similar experiences. Could it be that both Daryl and his mother are contactees?

One of the aspects of Daryl’s experiences which is the most intriguing is the various markings he has found upon his body on numerous occasions. One morning when he was 12-13 years old, he awoke to find strange red welts across his back which almost looked like scratch marks from a wild animal. His mother was the first to see the markings and was quite concerned about where they had come from. The skin was not broken or bleeding. The markings left behind stars which still exist today.

Photograph of Daryl's back with the various scars indicated: 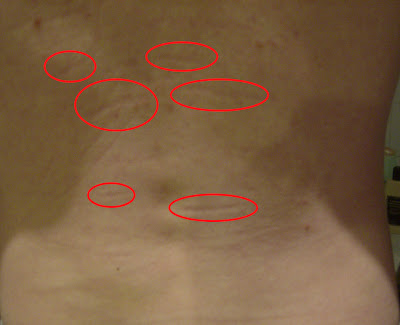 Quite regularly Daryl also finds lines of dots on the back of one of his lower legs (He is not currently sure whether it is the same leg every time or not). He believes these have appeared on him since at least 2004 if not earlier. These lines are always perfectly straight, though the number of dots varies. The dots are quite small, several mm across. They are not raised and are flat on the skin, and a red sore colour. They tend to fade away within a day. Daryl is certain that these markings have not been caused by insect bites or scratches. He has not done so before, but he says that if any markings reappear on him he will take a photograph of them.

Recently he found another long red scratch-like marking at the base of his neck. This marking appears to have a shorter line in the opposing direction towards the left hand side. Until he found it when looking in a mirror, Daryl had no idea this was here, and cannot think of anything which could be responsible for it. The marking does not look artificial, and it is possible that Daryl simply scratched himself on something without being aware, but considering the other markings which have appeared on him this could still be relevant.

Photograph of the scratch-like marking on Daryl’s neck: 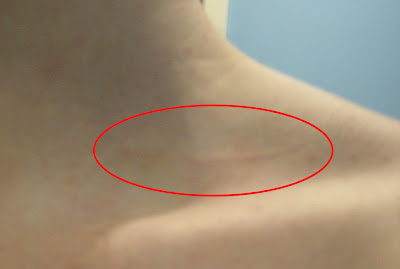 These markings, especially the lines of dots, are very interesting indeed. There does not appear to be an easy explanation for them, and they may well be physical evidence that Daryl is an abductee. If the scratch-like welts were caused by creases in the bed clothes or an allergic reaction, surely they would occur constantly and it would be obvious this is what they were. Could these markings have been caused by instruments used on him during contact experiences that he is not yet aware of? In most contact cases the individual’s conscious mind is cleared so they do not remember what has taken place.

Roughly every few months Daryl finds small specks of blood on his pillow case. He has no idea where this comes from, and is not prone to nosebleeds. There is never any sign that his nose or ears have been bleeding. Unexplained blood stains are one of the many signs that suggest contact may be taking place. This blood could be from temporary wounds inflicted by instruments used on him during contact experiences, which by morning have healed up.

Daryl regularly hears strange buzzing or ringing noises in his head while he is lying down in bed. These too can be a side effect of sleep paralysis, however Daryl says that he gets these at other times, and they do not appear related to his paralysis incidents. Contactees often report hearing similar sounds to these, and it is possible that these sounds are heard during ET scanning procedures or when a craft/ETs are in close proximity. However there is the possibility that the noises are a down to a medical condition such as tinnitus, and completely unrelated to contact.

Daryl has a pet cat which often comes into his room during the night. Sometimes it stares at him in a very strange way, and in the end he will shoo the cat away as it starts to creep him out. Another strange thing which occurs from time to time is that lots of cats from the neighbourhood will sometimes congregate outside the house. There does not appear to be any particular reason for them to do this. It is widely believed that cat’s have heightened senses and can detect things which we usually cannot. Could these cats be sensing that Daryl is different in some way?

Daryl is drawn to the night sky and the stars, and quite often sits out staring up at them. He feels that when he does this he may see a UFO. Sometimes he gets a strange taste in his mouth which remains for at least a day. He cannot describe this taste, but when it occurs he tries to get rid of it by gargling mouthwash, although this does not seem to fully work. Daryl feels like he should be doing something, helping people in some way, but he is currently not aware of exactly how or why. All of these things are possible signs that he is a contactee. Obviously none of them prove this beyond doubt, but they are still interesting to note in addition to his other experiences.

Daryl has certainly had some interesting experiences. As he currently has no clear recollections of being aboard a craft and seeing alien beings I cannot say whether or not he is a contactee to any degree of certainty. It is possible that his experiences have other explanations such as sleep paralysis and phobias. However some of the things he has mentioned are intriguing and do perhaps point towards contact taking place.

I hope to speak with Daryl’s mother soon to hear about her own experiences and what she makes of them. If I get the chance to do this I will add the findings to this report. Also Daryl has expressed the wish to be hypnotically regressed to see if there are any hidden memories surrounding some of his more unusual experiences. I hope to get this arranged for him in the near future.