Late on an evening in summer 2010 (exact date unknown), Phil Kew was staring out of the bedroom window of his house on Rutland Road, Mablethorpe. It was a clear night with very little cloud cover, and he was gazing at the stars. At about 11.30pm to the South he noticed to the right of his vision a white star-like light moving slowly towards the East. It was hard to tell exactly how far away it was but it was moving on a level course much slower than a passenger jet would fly at. The light was of a constant brightness. Phil was intrigued by the object and watched it for 2 minutes until it had vanished from sight. 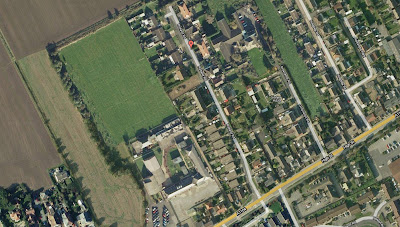 He continued to stare out of the window. After about 2 minutes another white light appeared in the same area of sky where the first had initially been. This time it was moving towards his location in a Northward direction, but looked identical to the first and acted the same.

Over the next half an hour he saw at least 8 objects. They always moved on a straight course, appeared identical to each other, but tended to move in different directions. Initially he thought they were planes but soon realised they were moving too slow and looked different to how aircraft would normally appear. As he watched them he thought about ringing his sister who lives nearby, but he felt it was too late at night and she would have gone to bed.

Phil wonders if what he saw was the same object moving back and forth across the sky rather than numerous separate objects.

Regarding the one/many question, I feel it is more likely that the lights were numerous individual objects rather than the same one continuously vanishing from sight then reappearing. Due to the number of objects seen and regularity of their movement I feel that it is unlikely the objects were craft of some kind.

Could the objects have just been satellites orbiting the Earth? Phil feels that they were in the atmosphere rather than out in space, but the appearance and movement pattern observed does fit with this potentially being the explanation. However most people would know how to recognise satellites, so I feel it is more probable they were something else.

If they were in the atmosphere, the lights could well have been a number of white LED balloons. These are electronically lit inflatables that come in a variety of sizes and shapes. They could have been launched from a nearby celebration. The objects did move in different directions, but perhaps this was down to changing wind direction. The slow speed and straight paths of the objects is reminiscent of how LED balloons or Chinese lanterns act when caught in an air current. I feel this is the most likely explanation for what was seen.