It was 3-4pm on a clear sunny and still afternoon in the summer of 2005. Clicks was out in his car with his girlfriend Michelle. They were at the junction between Prince Of Wales Road and Riverside Road, opposite Norwich Train Station, and were stopped at the lights. Suddenly Clicks noticed an object in the sky above the station clock. It looked like a matt silver coloured sphere. It looked quite small, about 2-3 feet in diameter. It was moving slowly in parallel to Prince Of Wales Road and was about 80 feet in the air, twice the height of the clock tower. Clicks estimates it was moving between 20-30 mph. It was heading on a very level and straight course and certainly looked like it was being controlled. 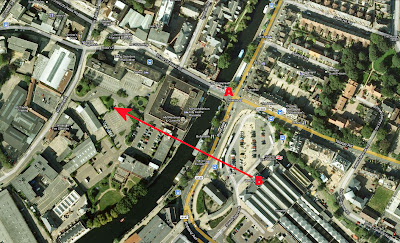 Photograph of Norwich Train Station with UFO drawn on top in location it was initially seen: 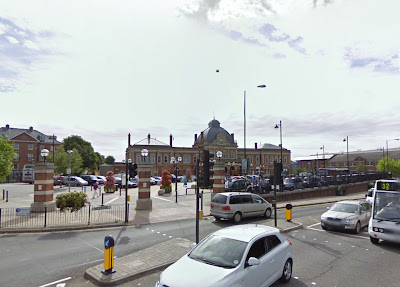 Clicks pointed it out to his girlfriend, and mentioned that if he still had the "black widow" catapult that he used to have when he was younger he would have been able to hit it. They watched the sphere for about 10 seconds after which it was lost from sight behind The Nelson hotel to their right. Clicks looked around to see if anyone else had seen it but everyone else was going about their usual business, it looked like it was only him and Michelle who had seen it.

Photograph of The Nelson hotel from the sighting location: 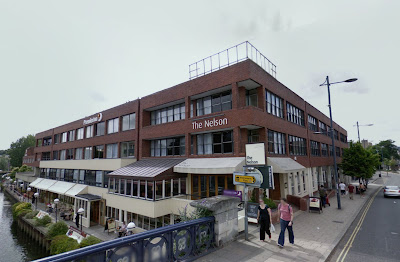 Clicks has a keen interest in UFOs and felt the object they had seen was some kind of probe due to its small size, and was probably extraterrestrial. He says it was definitely not a balloon because it was close enough to see clearly, and if it was a balloon there would have been a knot or string. Also its movement was very direct, despite the fact it was a still day.

Silver spheres are one of the most commonly reported types of UFO and are seen world-wide. Even though there remains the possibility that the object was a balloon or an unusual remote controlled model, due to the reasons Clicks gave I too feel that it was probably something else entirely.

It was a Saturday evening in August 2008. Clicks was round Michelle's house on Lincoln Street for a BBQ. Michelle, her sisters Kelly and Lisa, her father Darren and a friend Paula. They were all sitting in the back garden of the house, which faces to the South West. It was a warm summer's evening with no wind. 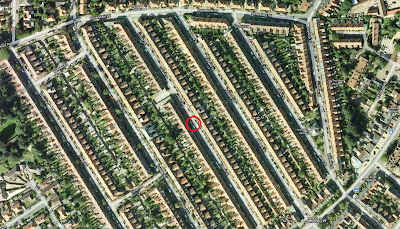 About 7pm a hot air balloon came into view in the South West and landed about half a mile to the South. While Clicks was watching it, Kelly asked him what he was looking at. He said to her "Just a hot air balloon, but I've a feeling we're going to see a UFO tonight". He had no idea why he said this, it just came out.

About 9.45pm everyone was still outside and talking. By this time the sun had gone down, and the moon and stars were visible. Suddenly there was deep rumble sound, similar to the noise a large truck makes when driving past. Nobody paid much attention to it.

A moment later, Clicks noticed a bright orange-red ball of light flying in a South East direction from the North West. It was completely silent and was seemingly moving at a very fast pace. It appeared to be travelling at least several hundred mph, and was about 1000 feet up. Clicks pointed at it and everyone stood up to watch. They all stared at the object for about 15 seconds until it had vanished into the distance.

Once it had gone everyone sat back down. To his amazement, two of the girls then started talking about normal everyday things like nothing had happened. Clicks was mystified by this reaction and asked them "Hey stop, what do you think just happened? Don't you realise there could well have been intelligent life from another planet in that thing we just saw? Is that not incredible?" But there was not much further discussion about what had been seen. A moment later, Michelle mentioned the rumble that had been heard and wondered whether it was connected to the object.

Two or three weeks after the BBQ, Clicks was at his home on Bracondale. He was out in the back garden having a smoke at 11.45pm. The stars were out so he was staring up at the sky looking out for shooting stars and satellites. Suddenly he noticed what looked like the same or a similar object to what had been seen at the BBQ - a glowing orange orb of light. It flew over the roof of the house he was facing and was again travelling in a South East direction. It was about the same height that the object at the BBQ had been, and again appeared to be travelling very fast. He only saw it for about 5 seconds until it had flown out of sight. 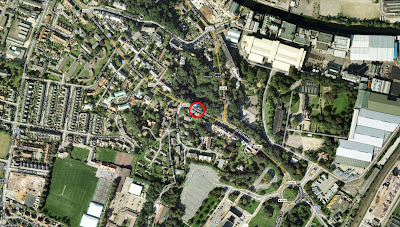 These sightings could be put down to Chinese lanterns. However Clicks says that he knows what these look like after seeing them on numerous occasions before, and these objects looked quite different. He also says they were moving much too fast to be lanterns. If the objects seen truly were going at over 300 mph then this would be true. However it is sometimes hard to judge the true speed of objects in the sky especially after dark. Even if it felt still at ground level, this does not mean there were not air currents higher up. The appearance of the objects is consistent with how lanterns look at a distance, and they are often seen to fly across the sky on a straight course.

The lighting of the UFOs is not consistent with any known aircraft or helicopter, and on both occasions they appeared to be silent. It is very unlikely they were earth lights, these do not appear over built up areas. I cannot say for definite, but lanterns are the most likely explanation.

If the object seen at the BBQ really was a glowing craft of some kind and not a lantern, then the rumble heard may have been connected to it, however the noise was heard before the object was even seen, and during the sighting it was silent. It is interesting that Clicks mentioned about seeing a UFO and then later that evening there was a sighting, however this could just be coincidence and is not necessarily linked to what happened.

Clicks has had some interesting sightings, although I do feel that two of them may be explained by Chinese lanterns. However the silver sphere sighting he and Michelle had in 2005 was much more likely to have been something out of the ordinary. I am sure he will continue to watch the skies, and will keep me informed of any further sightings he has.