Occasionally BUFOG is contacted by people who have seen a UFO many years ago and feel they now wish to get it down on record. This is the case with this particular sighting where two "classic" Flying Triangle UFOs (FTs) were observed by two witnesses, Jamie and his father Steve.

It was summer time of 2000, and a clear, dry evening. The witnesses were out walking their pet dog on a local field in Shrewsbury. It was around 9pm, the sun had gone down and the stars could be seen. Suddenly two objects in the sky caught their attention. They watched as two triangular shaped craft flew in a south-westerly direction in front of them. Both of the craft had a red light underneath at each corner, and emitted a blue haze from the rear. They were black in colour, with a reddish glow possibly from the lights on them. But also they appeared to be translucent. Jamie remembers seeing the stars through them. He estimates that the craft were flying quite high (under 35000 foot), and were extremely large, perhaps five times the size of a normal aircraft. It looked as if one craft was being chased by the second. The first one started moving erratically side to side, as if trying to shake off its pursuer. But the following one would react extremely fast and turn to follow. Jamie describes it’s movements as astonishing, he says that with any normal aircraft it would take several seconds for the pilot to react and change course, but the craft was performing these manoeuvres almost instantaneous. At no point during the sighting did the witnesses hear any sound coming from the craft, they were completely silent. Within ten seconds the craft had travelled the entire skyline and vanished from sight.

Witness drawing of the craft seen: 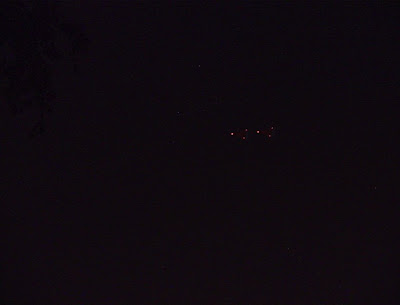 Location map showing position of witnesses and path of UFOs: 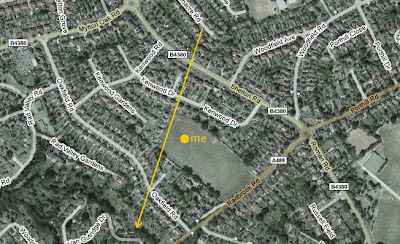 This is a very impressive sighting as the objects certainly looked like Flying Triangles, which have been reported many times before all around the world. There are many aspects of the incident which simply cannot have a mundane explanation. The appearance, size, speed, silent flight, and movement patterns observed dismiss most alternative possibilities. The fact that the objects were semi-transparent suggests that they were using advanced technology to provide a form of camouflage. It certainly seems that Jamie and Steve witnessed two unexplained craft which performed both intelligent and complex manoeuvres in the skies over Shrewsbury.

Jamie believes that the craft that they saw, and others which have been reported over the past decade, are not extraterrestrial but instead are secret military aircraft. He says that considering the F-117A Stealth Fighter was in use for 6-8 years before the public even knew about it, he sees no reason why Flying Triangles are the same but with more advanced technology. There is certainly logic in this argument, though I personally believe that Flying Triangles are extraterrestrial. If they are secret military craft that the general public is not meant to know about then surely they would not be flown across heavily populated areas? Also I have read numerous cases where alien entities have been seen at the same time as this type of craft. They have also been seen to reach speeds and perform manoeuvres which, to our current knowledge, a human pilot would not be able to withstand.

This case certainly appears to be a genuine Flying Triangle UFO sighting, and one which may have been observed by other witnesses elsewhere who have not yet come forward. If you have any further information about this incident, please get in touch with BUFOG.