This report covers a multiple witness UFO sighting from 1998 at the village of Penkridge, which lies to the north of Birmingham. It is a fascinating case, involving a clearly extraordinary object, which was both seen and photographed by numerous people, and also made the local newspapers at the time. I recently discovered that my friend Helen Burton was one of these witnesses, so with no prior arrangement I decided to interview her about what she saw.

Back in the summer of 1998 Helen was only 14. As it happened so many years ago she could not give the exact date, but she still clearly remembers the incredible event that occurred. It was around 10.30pm and a dry, clear evening. She had just been out at a school disco, and was being driven back to her home in Penkridge by her stepdad. They were almost home, and Helen was staring out of the car window up at the night sky. As the car turned into Druids Way from Wolgarston Way she suddenly spotted a very unusual object in the sky. At first she thought it was a plane but then realised it couldn’t possibly be. At the time Helen was in the Air Training Corp so knew how to recognise many different types of aircraft, but this was like nothing she had ever seen before. She first asked her stepdad if he could see it but he seemed uninterested by the object. So she got him to stop the car and she stepped outside to get a better look at it. The object appeared to be hovering motionless several roads away to the north-west, possibly above the local canal.

Arial view of canal with estimated location of UFO: 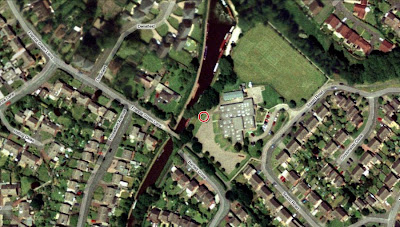 It was ellipse in shape, almost spherical, and was glowing an orange-pink colour. However the light from it was not intense, and she could make out a wider rim jutting out around the centre of the object. This too was glowing but slightly darker in colour. From the distance she was at, she estimated that the object was about the size of a house and approximately 70-80 foot in the air. It appeared to be making no sound at all, at least none she could hear, there was only the noise of cars from the nearby M6 motorway. She stood there wondering what it could be, but also frightened that it was going to come closer to her. The object remained stationary for about 50 seconds, then suddenly without warning it instantly gained speed and shot off into the distance in a north-easterly direction. Within several seconds it had vanished completely from sight, so it must have been travelling incredibly fast. At no point did Helen hear it make a sound. She could barely believe what she had just witnessed but was immediately convinced that it must have been an extraterrestrial craft.

Map showing position of witness, estimated location of UFO and its movement path: 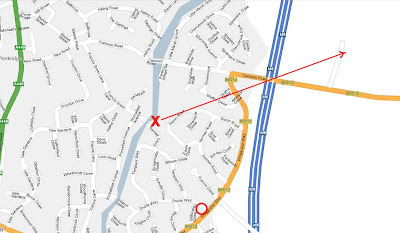 She got back into the car and told her stepdad what she had just seen, but unfortunately as he had remained inside the car he did not witness it himself. Helen remembers not sleeping well for several nights after the incident. Soon afterwards she saw an article in the newspaper about the UFO, some other witnesses had also seen and even photographed it. Up until her sighting Helen had only a passing interest in the subject, but ever since she has held a firm belief in the reality of UFOs.

The object as Helen saw it in the sky: 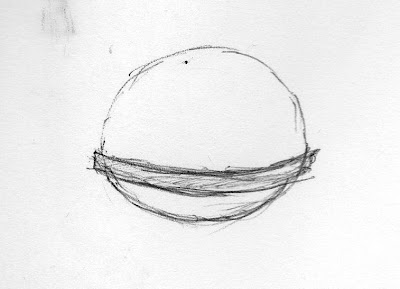 There are numerous factors of this sighting that make it extremely impressive. First of all the unusual shape of the object and the fact that it was stationary in the sky completely over-rides many of the theories of what the object could have been. It certainly wasn’t an aircraft or meteorite as they do not remain still in the sky and obviously look nothing like what was seen. The fact that it suddenly picked up speed to hundreds of miles an hour from a stationary position means it can’t have been a helicopter or some form of balloon. Even a radio controlled model of some kind would not be able to fly that fast, and the apparent size of the object would also remove this theory from consideration. We are not left with much to go on, other than it being an intelligently controlled craft of an unknown nature. The fact that there were other witnesses apart from Helen means that it was definitely a physical thing and not some kind of optical illusion, and they even managed to get it on camera. I am still currently trying to track down the old newspaper article and photograph, which would of course be very interesting to read. This would also name some of the other witnesses of the incident.

I am very confident that Helen is trustworthy, she has no reason to make anything up, and I asked her about her sighting completely out of the blue. There have been many UFO sightings reporting spherical/elliptical UFOs. One that particularly stands out for me is the infamous Livingstone UFO incident. This craft was spherical in shape, but like the Penkridge UFO had a rim jutting out half way up it. It does make me wonder if the two are related in any way. There have been other UFOs reported in the Penkridge area, including a possible UFO crash back in 1964. However none of the reports match the object seen. It is certainly an impressive sighting, and one which seems to be very hard to dismiss.