Recently an online friend of mine from Norway, Lars (name changed for privacy reasons) let me know details about a sighting he had when he was nine years old. The sighting occurred in the town of As, where he lived with his family, and as with many other European sightings describes a triangular shaped craft of unknown origin.

It was summer 1997 when the incident occurred. On a very warm still evening his mother decided that she and him would go out for a walk. They took a path they would often use which headed along a very picturesque road lined with planted trees. This road went past the local church. It was about midnight and there was no-one else around. As they were walking along the road away from the church, Lars suddenly felt the urge to turn around. He did so without telling his mother, who didn’t notice and continued to walk along the road away from him.

Looking back at the church he saw a strange object hovering above it. The object was triangular shaped with a small cube at the left and right corner, and about 20 feet wide. It was glowing a dull white/grey colour and he could clearly see the defined edges of the object. On each cube was a light, one red, one green. These lights appeared to be slowly blinking. The object was hovering a short distance above the roof of the church and was slowly gliding left and right as if searching for something. It was absolutely silent. Lars stood there amazed at what he was witnessing. He believes he watched the object for between 30-60 seconds. Then his mother noticed he was no longer with her, and called him. He turned back round briefly and when he looked back at the church the object had mysteriously vanished. Running back to his mother he told her about what he had just seen, and rather than assume he was making up stories she believed him. Lars never heard anyone else mention seeing the object that night, but he remembers the sighting vividly. He is convinced that it was an extraterrestrial craft of some kind.

Diagram of UFO (Drawn by myself from witness description): 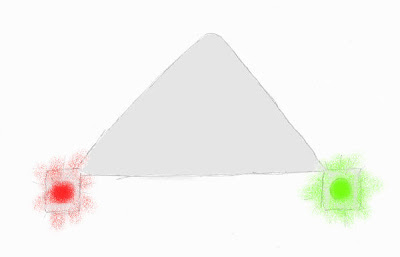 This is quite an impressive sighting as it accurately describes what appears to be a solid craft of defined shape rather than just a light in the sky. The object was performing controlled manouvres so is very unlikely to have been a randomly drifting object, and of course it’s appearance and the circumstances it appeared under does not fit in at all with it being a balloon or other inflatable. The object was much too large to have been a remote controlled model, Lars said it was at least half as long as the church roof. It was also definitely hovering above the roof rather than resting on it. Even though he was young, the witness was old enough to know what a helicopter or other civilian aircraft looked like, so it is unlikely he mistook what he could see. Also the object was completely silent, a fact backed up by the fact his mother did not turn round at all, if there had been a noise she would almost certainly have looked to see what it was and also noticed the object. While this triangular UFO was glowing white/grey rather than black in colour, it could well have been related to other flying triangle craft seen over recent decades. It’s always interesting to hear cases from outside of the UK or USA, they reaffirm the fact that this is very much a worldwide phenomenon.