Most UFO sightings tend to be of individual craft. However occasionally numerous UFOs moving together in formation are witnessed. This report covers an impressive sighting of a formation of UFOs that was seen in the skies over Bakersfield, Calafornia in the summer of 1979.

At the time of the incident, witness Dave Ruhe was 15 years old. He used to go to Carden Private School on, which was situated on Columbus Street, South Bakersfield. The town lies at the southern end of the San Jaqin Valley. 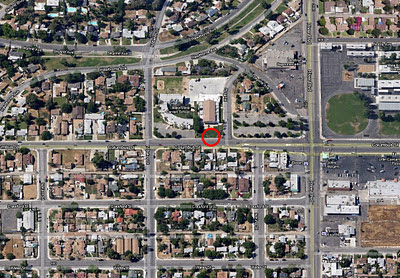 It was around 3pm in the afternoon. It was a very bright sunny day with no clouds in the sky. Dave, about 80-100 other pupils, and some teachers, were standing at the edge of the road waiting for the school buses to turn up. Dave happened to look up into the sky to the South West. It was now that he noticed something very unusual. High up in the sky, at least 2000 feet up, and about a mile from his location, were what appeared to be five silver disc-shaped objects. The objects were arranged in a structured pattern like the 5-side of a dice. The underside of the objects was reflecting the light. They were not moving across the sky, but appeared to be wobbling slightly, which was noticeable in the light being reflected off them, It was hard to judge their exact size, but they must have been quite large due to the height they were at.

Witness drawing of the UFOs including notes: 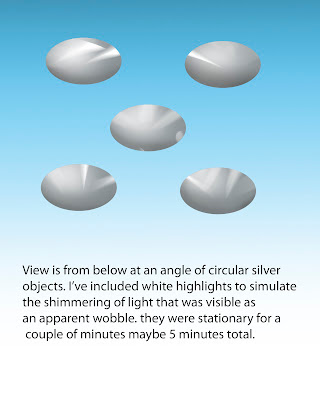 Photograph of the sighting location in the direction the UFOs were seen: 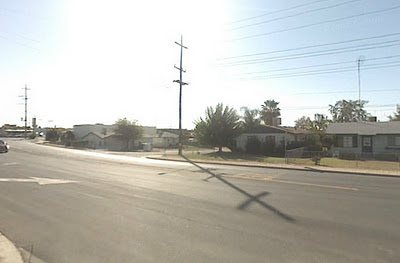 Dave pointed the objects out to the other pupils and teachers around him. Word spread about the UFOs and soon everyone present were watching them and questioning what they were. There was some traffic on the road, but nobody else seemed to have noticed the objects as they were high up.

After a short while, the objects all suddenly vanished without trace! It was a clear day so there was no cloud for them to be hidden behind, they had just gone. Soon afterwards the buses turned up and people headed for home. Dave does not remember people talking much about the UFOs in the days following the incident, but he is sure some of them would remember what they had seen. Unfortunately he has not stayed in touch with any of the other witnesses, so at present we only have his testimony to go on.

This is an impressive sighting of what I feel was probably genuine advanced craft, possibly of extraterrestrial origin, Due to the fact that there were many witnesses, any notion that the objects were a hallucination or issue with Dave’s vision can be disregarded. They were clearly visible in the sky. As it was a clear day they are unlikely to have been caused by an unusual cloud formation. The objects did not have the appearance of any known conventional aircraft. Due to their structured formation they appear to have been under intelligent control rather than randomly drifting balloons/inflatables.

Also we must take into account that the objects vanished in plain sight, and all at the same moment. This aspect alone puts many explanations out of the question. There was nothing for them to have been hidden behind, so this suggests that they either turned invisible and were still present, teleported elsewhere or flew away at an extremely fast speed instantaneously. Obviously none of these could have been performed by conventional aircraft or radio controlled models.

The slight wobbling motion reported fits in with many other UFO cases. This is thought by some to be caused by distortion of the object by the energy field which surrounds it and allows it to move around in our atmosphere. Whether this is actually the case or not, the fact that it fits in with other reported sightings is in itself important.

It is both mine and Dave’s view that these were genuine craft which were in the area for an unknown reason. It is impossible to say whether they were piloted, and if so whether the occupants were ET or human. However I find it extremely unlikely that the military have the capability to build such objects, even in secret. And even if they could, it is unlikely they would fly them in full view of many witnesses over a populated area.

This sighting reminds me of the incident from August 1974 where a V formation of disc-shaped UFOs flew across the UK and was seen by many different witnesses, three of which I have independently spoken with. The two cases have numerous similar aspects. The shape and colour of the objects matches. In both cases the objects were flying together in a structured pattern at high altitude. And even the slight wobbling motion was mentioned by one of the 1974 witnesses just before he watched the objects vertically ascend at tremendous speed. To view the case report on the August 1974 incident, click here.

If you have come across this report and also saw the discs over Bakersfield, or know one of the other witnesses, please get in touch.