This report covers a stunning sighting of a very unusual object which was seen making highly unusual manoeuvres in the area of Blackridge in Scotland. There are numerous aspects to the case which are very interesting indeed.

One night in the summer of 1975 or 76, Tom Collins got up to use the bathroom in his upper floor flat on Langside Drive, Bathgate. It was between 3-4am. He decided to take a look out of the bathroom window to see what type of a night it was. The bathroom had a small frosted window which he pushed open. It was a warm, clear and still night with good visibility. The sun had not yet started to come up. 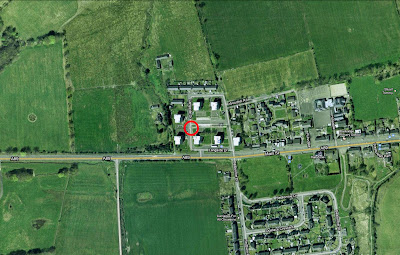 It was now that he noticed a very strange object in the distance. About 3 miles from his flat to the West was Hillend Loch. The object was situated a little closer to his position than the Eastern end of the loch. It was about 50-100 feet in the air. It was a rounded trapezoid shape, taller than it was wide. On the base of the object appeared to be many multi-coloured. These were in two bands, one rotating in a clockwise direction and one rotating anti-clockwise. It was hard to tell the colour of the object due to the distance and the glow from the lights. It appeared to be about the size of a bus. 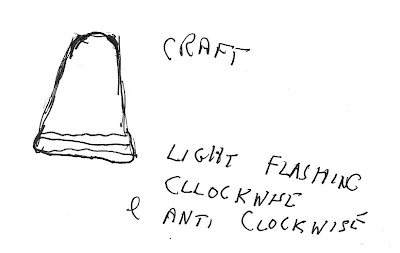 At first the object appeared to be stationary. Then suddenly it moved almost instantaneously in a Southerly direction by about 1000 feet. It was now much closer to a TV mast on Dews hill, to the South East of his location.

Aerial map showing the location of the TV mast: 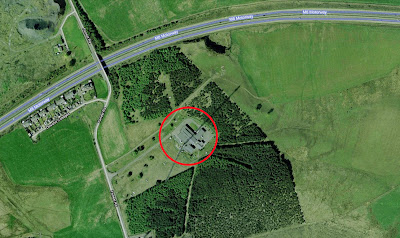 Photograph of the mast, which still exists today: