Usually when someone sees a UFO they are merely observers of something out of the ordinary. However sometimes there appears to be direct interaction between the witness and the object, which can take a number of forms. This report covers a fascinating close encounter with a UFO where apparent communication was established.

The encounter you are about to read about took place in the summer of 1975/76. At the time Paul was only 4 or 5 years old. However he still remembers the incident and it has stuck with him for his whole life. This is the first time he has openly told anyone about what happened in detail.

It was a warm and clear afternoon with very little cloud in the sky. Paul was outside the front of his family’s house on Alder Grove in Stretford, Manchester, and was playing with his football. Inside the house were his parents and his sisters. There was nobody else outside at the time. The road is a small secluded cul-de-sac so his parents were fine with him being out on his own. Also his grandmother lived at the end of the road so would check up on him regularly. 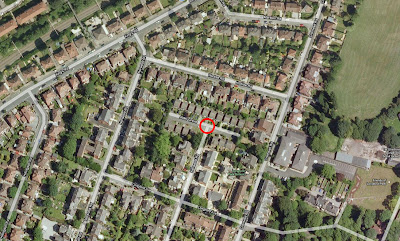 Suddenly something above him caught his eye. He looked up, and directly above him in the sky was a silver disc-shaped object. As he was viewing it from underneath it looked completely circular. It was about the height a helicopter would fly at, and was quite large in size, Paul estimates it was about the size of a football stadium, although due to his age it may have appeared larger than it actually was. There were lights of multiple colours visible around the edge of the disc.

This is an example hoax UFO photograph that reminds Paul of the object he saw (If viewed from beneath and with coloured lights around the edge): 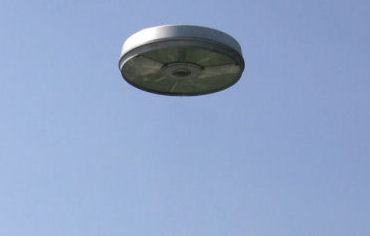 Paul immediately looked around to see if there was anyone else around but there was not. He wanted to go and tell someone but was too amazed at what he was witnessing. He looked back up at the disc.

At this point some sort of interaction began to take place between him and the UFO or its occupants. At first he was scared inside and very aware of the presence of the disc. He said in his mind “Ok I see you and you see me”. Then suddenly a feeling of calm and safety came over him. He felt very happy and empowered with confidence. He began having thoughts that were well beyond his age. He was being told things by telepathic means and also responding, though he cannot remember the exact communication which took place. He felt that everything was going to be ok and that he should not worry.

These strange feelings continued for what Paul felt was at least 10 minutes. During this time he believes he was just standing under the UFO looking up at it. After this time he then felt it was time to go. He thanked them, stopped looking up and went back to his football. Looking back he saw the disc was still there, but then saw it lift up vertically out of sight. He went back home but did not tell his family about what he had seen.

Paul has no idea why the ETs chose him to communicate with, or what the reason behind this communication was. He feels he has a purpose in life, and over the last two years has come to realise this purpose. Since an early age he has felt that the system was wrong and that everyday life was somehow false. Two years ago he began looking into New World Order and governmental corruption, and has started to view the world in a new light.

This is a fascinating encounter with a UFO that apparently interacted with the witness. Paul was quite young at the time, and of course children can sometimes imagine things. It is also possible that the object was not as large as he remembers it being. But I find it very unlikely that he mistook a balloon/inflatable for an alien craft, firstly because of the fact it hovered still for over 10 minutes before moving away, and secondly because of the direct communication involved. The object was clearly not a helicopter and was very unlikely to have been a radio controlled model.

Paul will probably never remember exactly what was said between him and the occupants of the UFO. When looking back at the experience, he does feel that he was communicating with multiple entities not just one.

It is a shame that there were no other witnesses to the UFO, as this would have verified certain aspects of the incident. Just as with many other UFO sightings we only have Paul’s testimonial evidence to go on. However it is an incident which has stuck with him ever since, and one which he feels definitely took place. He is clearly not making up the experience, and has only now decided to speak of what happened so many years ago, something we should all be thankful for.