Linda Richardson is 62 years old and lives near Pascagoula MS. Back in 1981, she and her son Anthony lived out in the county of Mobile, Alabama. Their house was about 2 miles along Dick Ship Road (later renamed to John Shinn Road), a dirt track leading off Georgetown – Chunchula Road, which in turn ran off State Highway 45. The family owned about 5 acres of land around the house. In early spring of that year, they and Anthony’s friend Tony had an astounding encounter with a strange aerial object. 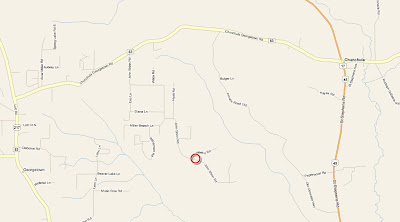 Aerial map of John Shinn Road, showing the amount of woodland in the area: 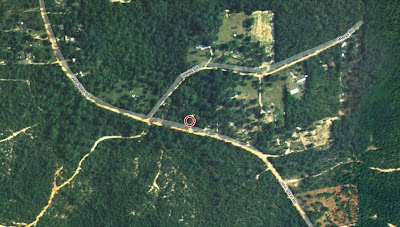 It was about 8pm in the evening, and Linda was cleaning her kitchen. The family owned a horse named Timmy and a small calf named Charley. Both the animals started to make noises like they were distressed at something. Anthony and Tony decided to head outside and see what was causing the animals to be upset, expecting to see a wild animal of some kind. They headed through the kitchen and went outside, leaving the back door open. A few minutes later Linda heard her son call her, saying “Mama come here, look at this!”

Linda went outside to see what was going on. It was a calm clear night, and there were no clouds. The stars were fully visible. The boys were staring up into the sky at something. She looked up, and almost fainted at what she saw. Almost right overhead hanging in the sky was a large glowing white sphere. It was about 500-600 feet above them and completely motionless. Her first thought was “Gosh, there’s something wrong with the moon, it’s too close to Earth!” She noted that it had no different shades on it, it was bright white all over. It was totally silent as it hovered above them. Linda’s emotions were a mix of fear and awe. She felt defenseless, and that she had no way of protecting her son from whatever it was.

Drawing of UFO based on witness description: 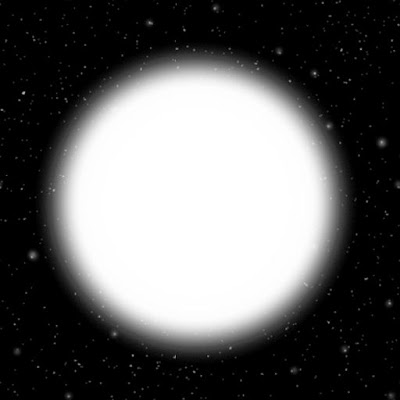 After several minutes, without warning, the object began to move. It was only now that Linda realised it couldn’t possibly be the moon but was a hovering object of some kind. It started slowly then began to build up in speed, moving off to the South and slowly gaining in altitude. The object moved over the roof of the house and was lost from sight. Linda and the boys ran through to the front porch to continue watching it. A number of dull red coloured lights were now visible low down on the rear of the object. Linda cannot remember how many there were or what configuration they were in. Her initial fear was now replaced with a desire to protect her son. She grabbed a broom from inside the front door. She put her hand on Anthony’s shoulder and said to him and Tony that whatever the object was is was not going to get them.

Suddenly the object dramatically increased in acceleration and shot away to the South. It did this in complete silence and was lost from sight in a split second. Linda compares the speed to that of a bullet being fired from a gun. It was truly breath-taking to watch. The witnesses were left there on the front porch, astounded at what they had just seen. They discussed the object for a long time, wondering what it could have been. 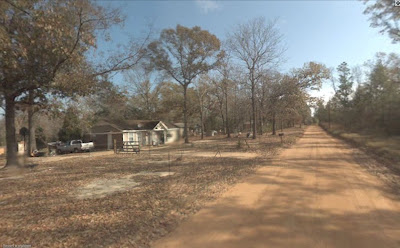 After a while, Linda decided to phone her next door neighbour Betty. It turned out that she too had witnessed the object. She had seen the light from it coming into her house, and wondering where it was coming from had gone out to her porch to take a look. She was very scared by the presence of the object.

Later Linda decided to contact the Air Force to see if they were aware of the UFO (She first called the local Coast Guard to get the number). When she rang she was not aware of which Air Force base she was in touch with. She spoke with a man who identified himself as an officer. Linda does not remember if he gave his name or not. She started to relate to him about what had taken place. The man said that the object they had seen was probably a weather balloon. Linda said that her uncle was a meteorologist and that she was well versed in what weather balloons look like and are capable of. She did not buy his explanation at all. The man seemed uninterested, as if she was wasting his time. He reluctantly listened for several minutes but provided no satisfactory explanation. She was not aware whether the call was recorded or written down.

In the morning, the mailman George called at their house. George was on friendly terms with many of the residents in the area. When Linda informed him about what she had seen, George said that he too had seen the object, as had other people in the neighbourhood. Despite the multiple witnesses to the incident, there was no newspaper article written about the UFO, Linda feels that they may have been told not to because of the fear it would have caused. Or perhaps nobody decided to inform the local paper so they were unaware that it had taken place.

For a while after the incident, the witnesses had trouble sleeping. Linda got her husband to load up every gun in the house. Neither her, the boys or her neighbour Betty would go out at night-time for fear of the object returning. Every night up until Linda and Anthony moved to North Alabama, they would watch the skies and ask God to protect them. Linda thought about the object often, wondering about the answers to her many questions – What was it doing there? Did it have occupants? Was it friend or foe? Would she ever see it again? Prior to the sighting Linda had no interest in the UFO subject, but ever since has regularly watched the skies.

Linda feels that the officer she spoke to at the Air Force knew about the object, and was covering up information. A few months after the incident, a staggeringly bright flash of light was seen by many people from Bay Minette to Citronelle. Apparently local news stations were alerted but a cover up on the story took place, in which the Air Force were involved. Word got out that a UFO had crashed somewhere near the Bay Minette area. Linda wondered if it was the same object she had seen. Sadly she has no further information on this incident, and as it happened so long ago I have not been able to find any details of it online.

“I, Linda Richardson, living in the Georgetown - Chunchula AL. area at the time of the sighting of the UFO do testify this is the truth.”

This is a stunning sighting and very hard to explain in conventional terms due to the movement the witnesses saw the UFO perform. The object obviously could not have been a weather balloon or other inflatable. It was a still night, but even in windy conditions a freely drifting object would not have performed the manouvres seen. These manouvres certainly appeared controlled, with the object hovering completely still for an amount of time before starting to move away and then suddenly flying off at an incredible speed. It was clearly not a conventional aircraft or helicopter of any kind, and is highly unlikely to have been natural phenomenon such as ball lightning. I feel that the most likely explanation in this case is that the object was a genuine craft with advanced propulsion systems, probably of extraterrestrial origin.

It is interesting to wonder what the object was doing there at the time. The noises the animals were making suggest that it was already present before the boys went outside, so it is unlikely to have been there to observe the witnesses. Perhaps it was checking the animals, or something else of interest in the local area. Or maybe it was there for another unknown reason. There is no indication that it interacted in any way with any of the witnesses invovled.

The fact that there were many witnesses to the event from different locations verifies that it definitely took place, and that the object was really present in the sky. Linda comes across as very level headed and genuine. She has no reason to make up the incident, and I do not believe for a moment that she is making up what took place. Sadly Anthony has since passed away, and Linda does not know the contact details for Tony, so I am unable to discuss the incident with them.