On a Saturday evening in September 2009, Daisy, her boyfriend Stuart and his parents Dave and Ann were travelling back home from Kinver along Kidderminster Road (A449) on the outskirts of Kingswinford. It was a very clear, cold and still evening and the stars were shining brightly in the sky. There were several other cars on the road but it was relatively quiet.

It was about 10.50-11.10pm and they were in the vicinity of Summerhill school and some nearby woods, when suddenly Stuart spotted a number of glowing objects in the sky over the woods to the South East. He alerted everyone else to the lights and they all stared out of the car windows. There were seven glowing orange orbs. Their brightness was not constant and seemed to dim then brighten again like firelight. Four of the seven were in a diagonal line to one another, and the remaining three were scattered around them. It was hard to judge the exact height and size of the objects, but they looked to be at least as high as a light aircraft would fly at. 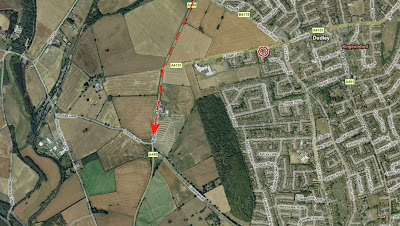 They continued to watch the objects for about two minutes until they turned up a side lane and the objects were lost from sight. Some of the time the objects appeared to be stationary and at other times they appeared to be moving at a slow speed. All the witnesses were amazed at what they had seen.

This sighting has all the characteristics of Chinese lanterns, and I am almost certain that this is what was observed. Daisy said the objects looked too big to be lanterns, she has seen them in the sky before and knows what they look like. However lanterns can often appear larger than they actually are due to the brightness of the light emanating from them. The shape and colour of the objects, and the fluctuating brightness of them, are all consistent with lanterns. Also the objects did not display any interesting manoeuvres that would suggest they were under intelligent control.

Lanterns are often launched in multiple from celebrations, and have become very popular in recent years. They can form lines or patterns in the sky, as they are all launched from the same location and all drift in the same direction as the wind. Many of the sightings received by BUFOG, especially over the last year, have the probability of being lanterns.