This sighting of a potential Flying Triangle has some unusual aspects to it, but remains an interesting case, with numerous similarities to other FT incidents. The witness got in touch with BUFOG after hearing us being interviewed on Kerrang radio.

Andrew believes the sighting took place in September 2008 but he cannot remember the exact date. He was listening to the same radio show that we were recently interviewed on – “The Night Before.” This late night show from 10pm-1am features many interesting interviews, often based around the paranormal. On the particular evening in question, there was someone on who proposed that if you went outside your house and believed you were going to see a UFO then you would do! This seemed unlikely, but the witness decided to go and try precisely that. He went outside, around the side of his house on Flat Road, Chichester. He thought about wanting to see a UFO and stared at the sky for several minutes. It was a clear, pleasant night and the stars were out. He could see nothing and was just about to head back inside when he glanced back to the sky directly over his house.

There over the roof of the house, several hundred feet up, he could see what looked like the corner of a massive dark navy-coloured triangular shaped craft. There were no lights visible on the craft. Andrew estimates that judging by the corner he could see, the craft must have been 150-200 foot wide. He watched it hovering silently in the sky for several seconds. He did not feel any fear, he felt more elated and excited about seeing the craft.

As he looked at it he felt in his head that he was being asked if he wanted to go along with them. He remembers thinking that he did not wish to go. A second later the craft suddenly accelerated away from his position at great speed. It did not fly overhead but instead went away out of sight over the roof of his house to the East. He describes how the speed was incredible; it must have accelerated instantly to hundreds of miles per hour. Throughout the sighting the craft was completely silent. 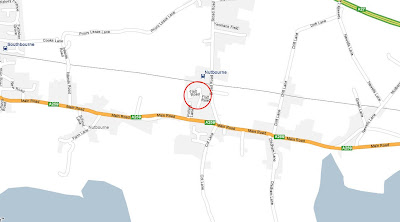 Soon after his sighting, Andrew spoke about it to a friend, who suggested that what he must have seen was just an after image of the roof of the neighbouring house. However this could not have been the case as they have a flat roof, this would not have caused the shape he saw. He is convinced that he saw something genuine that had seemingly turned up on purpose in answer to his thoughts. There are some fields close to his house, and he wonders if maybe instead of him, the craft was observing something in those fields. Andrew personally believes in UFOs but believes that they are actually craft from the future, and that extraterrestrial beings seen are actually an evolved form of ourselves. It is certainly an interesting theory which I have heard mentioned numerous times before.

It seems almost too good to be true that the witness actually stepped outside wishing to see a UFO and then one actually appeared, but this does not mean that it did not happen. Perhaps what was seen was merely an optical illusion of some kind that lasted for a short time, but the witness is adamant that it took place. His house is close to a main road (the A259), if a craft of such size did actually appear, there may be others who also witnessed it but have yet to come forward.