This report covers a fascinating case where a formation of unexplained lights were seen in the skies over Huddersfield in September of 1992 by a man walking his dogs. These lights appeared to be attached to a single large object which was hidden from view by the clouds. It later transpired that there had been many other witnesses to the same lights.

Late one evening Ken Wilson was out walking his dogs at Cowlersley on the outskirts of Huddersfield. It was an overcast night with complete cloud cover. It was dry but cold, with a slight breeze blowing. It was about 10-10.30pm. Ken lived on Rose Avenue. A short footpath leads through to the end of Main Avenue. Ken would regularly let his dogs off the leads to have a run around in the grassy field at the end of Main Avenue.

Photograph of the footpath between Rose Avenue and Main Avenue: 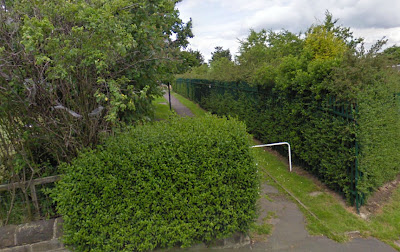 Ken was waiting at the end of the road for the dogs to return. There was nobody else around, probably due to the weather conditions. He looked towards the centre of Huddersfield, roughly 3 miles away to the North East.

Aerial map showing the route that Ken took and the sighting location: 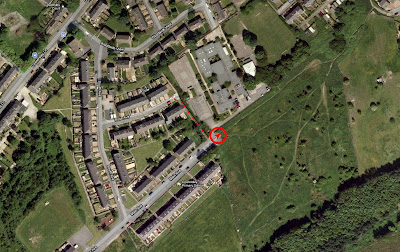 It was now that he noticed a ring of revolving multi coloured lights over the area. The lights appeared to be just inside the cloud layer. They were at an angle of 40 degrees from his location. He estimated they were between 1500-2000 feet high. The lights were all pulsating and changing colours between white, green, blue and red, although at a distance they looked mostly red. They were rotating in a clockwise direction. At first Ken assumed they were a laser light display from the local football stadium, however they did seem too close for it to have been from this, as the stadium was about 4-5 miles away. Also there were no beams visible in the air, just the lights.

Photograph of the sighting location in the direction Ken saw the lights: 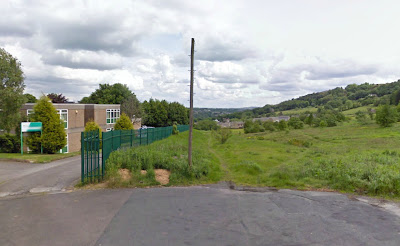 Ken was puzzled by the lights. He watched them for about 10 minutes. The lights continued revolving in the same location. He then decided to head for home. He called the dogs, which quickly came running past him and disappeared along the path towards Rose Avenue. Ken turned and began to walk along the path himself.

A moment later, curiosity overcame him and once more he glanced back at the lights. He rested his elbows on a wall and continued to watch them intently. After about a minute and a half, the lights suddenly began moving in his direction! Ken was surprised by this new development. The lights were now moving at about the same speed as a light aircraft, and still rotating as they went.

After about 45 seconds they had got nearer and Ken now noticed other lights. There was what appeared to be a curvy line of white glowing orbs starting around the centre of the ring of multi coloured lights in the direction the lights were travelling in. It seemed to Ken that these were a bit lower than the ring of lights and were separate objects which were leading the main object. They also appeared to be 2-3 times as big as the multi-coloured lights.

Witness drawing of the unexplained lights: 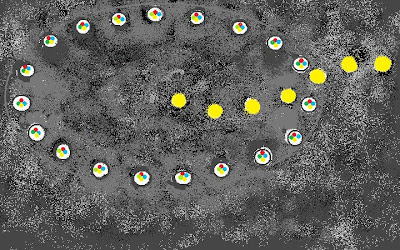 It took a further 45 seconds before the lights reached his location. As they approached, Ken ducked down behind the wall. He was a little frightened that whatever it was would see him. The lights travelled overhead and continued on the same path until they had gone out of sight to the West in the direction of the Holm Valley. They were completely silent throughout. Ken felt certain that they were attached to an object inside the cloud layer rather than lights being projected onto the base of the clouds.

Once the lights had disappeared, Ken continued his walk home. He got back about 10.25pm, and was greeted by his dogs who had ran all the way back. Later his wife returned home and he explained what he had seen. She did not really believe him, neither did his work mates in the morning. However the following evening they were in a local pub when another of his friends turned up. He asked them whether they had seen the newspaper. When they informed him they had not, he took out one from his pocket. On the front page was an article entitled “Light Show In The Sky”. It seemed that earlier on the previous day many other people witnessed the lights over on the opposite side of Huddersfield! Some of the claims in the article seemed rather dubious. One person had claimed that they tried to photograph the lights and when they did their camera exploded!

Ken has checked through the newspaper archives down his local library but so far has been unable to track down the article, probably due to how long ago the incident took place. Or perhaps he has the date of when it occurred incorrect. If he does manage to find it he will send me a copy to add to this report.

This is a very interesting sighting indeed, and has many unusual aspects to it. The most obvious explanation for a ring of revolving lights on a cloudy night is exactly what Ken initially suspected was responsible – a projected laser display from somewhere. However this could not have been the case as the lights moved not only in his direction, but right overhead and away into the distance. This meant that they must have travelled at least 6 miles, and so were clearly not being projected from a particular location on the ground.

They were certainly artificial in nature, and the fact they were in a revolving circle formation suggests that they were part of a singular object hidden from view in the clouds. The way in which the object was hidden from view could of course have been intentional.

So if the lights were attached to an object, what was it? Obviously this configuration does not fit in with it being a conventional aircraft of any kind. The diameter of the lights seemed to be too large for it to have been a radio controlled model, and if it was a hoax model UFO of some kind there would have been no reason to hide it away inside the clouds, it would have been flown in plain sight to increase the impact. Could it have been an electronically lit inflatable? This seems unlikely due to the movement pattern of the object. It remained stationary for many minutes before suddenly moving on a straight and level course. This suggests it was under control rather than randomly drifting.

Of course the revolving ring of lights were not the only thing that was witnessed. What can be made of the white glowing orbs of light seemingly moving in synch with the main object? Could these have been placed at various points along a wire that was towing the main object? Possibly, but if this were the case the only thing that could have been towing it would be a helicopter. The object went right overhead and was completely silent, and no other lights were seen, so I do not believe it was this. The whole idea of a helicopter flying inside a cloud towing an object covered in flashing revolving lights sounds pretty unlikely to begin with.

Most explanations for the lights can be disregarded for one reason or another. But could they have been on the underside of a disc or saucer shaped UFO? This could explain how they were able to hover for a time then move off on a course, and why they were silent when they went overhead. Perhaps the white orbs of light seen were also part of this craft and jutting out. However it seems more likely that they were separate smaller objects which were leading the main object for whatever reason. As with most UFO sightings there is nothing that proves that the origin of the object was extraterrestrial, however it was clearly far from conventional.