In early January 2015 I was contacted by Kelly who wanted to inform me about an incident involving her son Paul which took place in 1997 when he was 3 years old at their home in Selly Oak, Birmingham. She awoke one early morning around 3am to hear Paul screaming out loudly from his bedroom. She ran into his room and found him shouting out the words “Spaceman! Spaceman!” He was quite hysterical but after a while she managed to calm him down and brought him back to her room to sleep for the remainder of the night.

Several days later Paul was drawing in a colouring book. Kelly noticed there was a picture of an astronaut in the book. She pointed at the picture and asked Paul if that was what he had seen in his room. He replied “No!”

In the following days Kelly couldn't stop thinking about what happened. She began to wonder if Paul had seen something else in his room. She went to the local library and rented out a book on aliens. In the book was a picture of a Grey. Kelly was not particularly interested in Ufology at the time so was not familiar with it.

Example drawing of a Grey’s face: 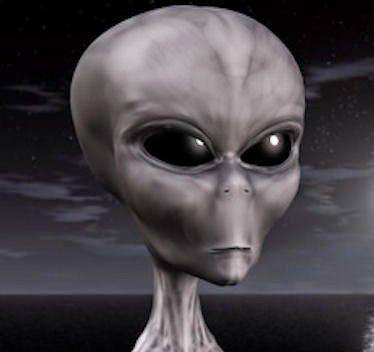 Back home she opened the book with the picture of the Grey on it and called her son over.  Without saying anything she just pointed at the picture. Her son immediately began crying and saying “Spaceman! Spaceman!” Kelly says that there was nothing about UFOs or aliens in their house, so was quite alarmed when her son reacted to the picture in this manner.

From this point on Kelly took more of an interest in the UFO subject and is now quite well versed in it. Recently she asked her son about the incident but he has no recollection of it.

The fact that Paul reacted in such a manner to the picture of the Grey does suggest that he may have experienced a childhood visitation. There is no indication that he has had any other contact-related experiences or that he had been abducted at the time, but it is still a very interesting incident.