Over the years Bob Mortlock and his wife Debbie from Stevenage, Hertfordshire, have had numerous sightings and taken numerous photographs of UFOs. This report will cover each incident seperately in detail.

Back in 2000 Bob and Debbie were living at a house in Harlow, Essex. On a Sunday in the October of that year, they went to a car boot sale being held on Barrows Road. It was a bright day with scattered cloud and was quite windy. Harlow is on the direct flight path for planes landing at Stanstead Airport to the North East. At 1.00pm in the afternoon, Bob noticed a 747 jumbo jet on its approach from the South West at an altitude of about 5000 feet. As he watched it get closer, he suddenly became aware of a second object on the same flight path at the jet, approximately half a mile behind it. The object looked like a black coloured equilateral triangle. It had no protrubences or undercarriage, and looked about the same with as the jet but not as deep. On its underside was a square marking which was brown in colour, but other than this no further details could be seen. 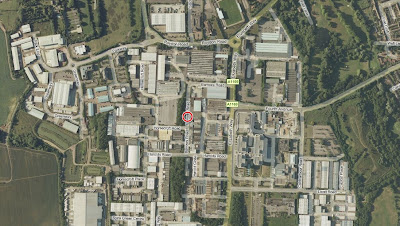 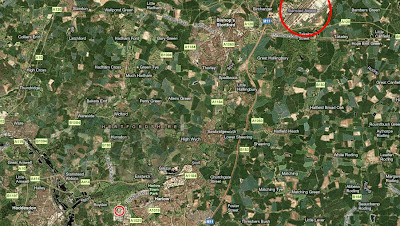 He immediately stopped watching the jet and concentrated on the unusual triangular object instead. When it got to about half a mile from his position, it suddenly stopped and turned 90 degrees on its axis to the left. It then continued moving at the same speed it had been to the North West in the direction of Ware, flying against the wind. It was completely silent. After a short while it vanished into some cloud, and did not reappear.

Witness sketch of the triangle from underneath: 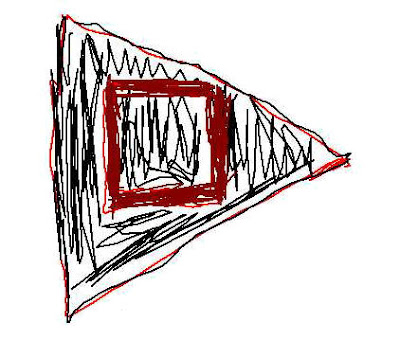 Bob felt that the object was a craft of non-human origin, due to the impressive manouvering capabilities displayed. He has been interested in aviation since an early age and was convinced it was not a conventional aircraft of any kind. He feels that if it was a secret military craft they would not have been flying it in broad daylight in such close proximity to other aircraft. The normal seperation distance between aircraft is at least 2 miles, but the triangle was only half a mile behind the plane.

This is certainly a very interesting sighting and the most convincing Bob has had. Black flying triangle craft have been seen many times before all around the world, especially over the last couple of decades. I have personally investigated a number of cases involving very similar craft, although the brown square on the underside of the object is not regularly reported. It may have possibly had lights but because it was the middle of the day they could have been switched off, or hard to make out in the daylight. The object sounds too large to have been a model, and it appeared to be under intelligent control, following along after the jet before suddenly turning and then continuing on a level flight path. As it was the middle of the day, there may have been other witnesses to this object, but Bob is unaware if anyone else at the car boot sale saw it.

Bob is planning to send me a drawing of the triangular object, once I receive it I will add it to this section of the report.

In July 2006, Bob and Debbie were staying on Totterdown Farm camping site just to the West of Gloucester. The campsite is on a hill which overlooks the airfield of RAF Fairford to the South. Every year an airshow is held at RAF Fairford, and Bob would get a good view of the planes from the farm. During the airshow, Bob decided to get some photographs on his Canon EOS 350 digital camera. It was a bright sunny day with scattered cloud. Among others, he took a photograph of a Mirage 2000 fighter jet about mid-day. 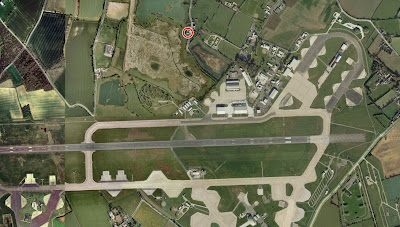 Later one when he checked through the pictures, he noticed a black dot on the picture of the Mirage jet. When he zoomed in on the picture, he realised the dot was actually a disc-shaped object in the distance. He kept the photograph on disk, but has currently not been able to track it down. He is looking for it at the moment, and if he finds it he will send me a copy to add to the report.

The following year, Bob was again taking photographs of the planes at the airshow from Tottendown Farm. This time there was a clear blue sky. When he checked through the photos, on several featuring an F18 jet he noticed a semi-translucent, blunt-ended cigar shapd object. This object was at a different position in relation to the jet in each photograph. In one it was near the nose, one off the port side and one near the tail.

The strange shape did not appear on any other photographs taken that day so Bob does not believe it was a camera glitch or something on the lens.

The three photographs containing the object (at reduced resolution): 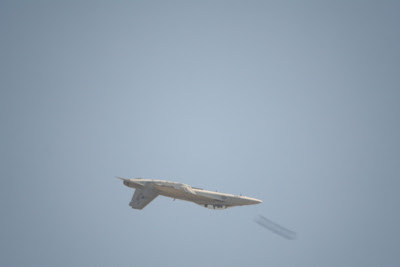 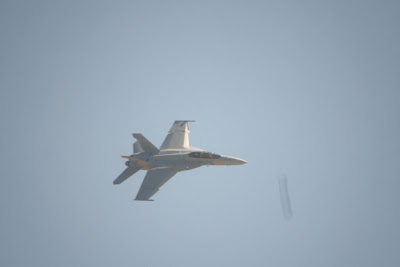 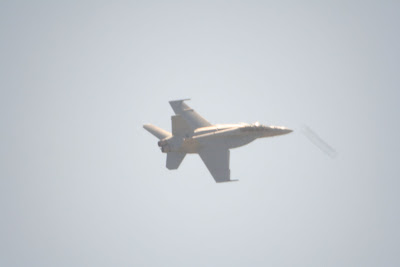 Zoomed view of the object (taken from the first photograph): 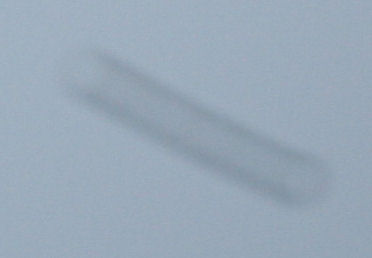 The object is clearly semi-transparent and a long cylindrical shape with defined flattened ends. It is interesting that it is at a different angle on each photograph, this shows that it cannot have been something stuck to the lens of the camera. However I feel that it is likely to have been something tiny floating a short distance in front of the camera lens while Bob was taking the photos, such as a hair or seed casing. The fact that it is blurred while the jet is in focus supports this theory. Also if the object really was up there next to the jet at the time then lots of other people would have also captured it on their photographs, and the jet pilot may have even seen it and tried to perform evading manoeuvres. This would have almost certainly been reported either by newspaper or TV, or at least been discussed online. However to Bob's knowledge nobody else reported seeing the same object.

A resident who lives near to Bob and Debbie recently informed them about a sighting she had on 19th March. It was about 8pm and she was in her house at the time. She looked out of the window, and to the South in the direction of Welyn Garden City she saw a bright glowing object in the shape of a dinner plate hovering in the sky. It was about 3000 feet up and was stationary. Suddenly it massively accelerated and shot off in an Easterly direction on a straight path, and vanished from sight.

This is a very interesting sighting indeed. The appearance of the object and the impressive movement pattern observed clearly indicate it was something out of the ordinary. It is unlikely to have been a conventional aircraft or meteorite as it was stationary to begin with, and the massive acceleration and speed described means it is highly unlikely to have been a helicopter. It was also the wrong shape and much too fast to have been a lantern or lit inflatable. Sadly I am not able to speak with the elderly witness involved to get more details about this incident as she is very reclusive. If she tells Bob and Debbie any further information about it, they will be added to this report.

Around 8.30pm on the evening of 11th April 2010, Bob and Debbie were in the residents lounge in the building where they live. Looking out of the window they saw a very bright yellow-orange ligh in the sky to the West, in the direction of Hitchin. It was as bright as a fog light, and more yellowish than an amber street light. It was completely stationary and appeared to be about 3 miles away. After a couple of minutes it suddenly vanished without trace. Bob was sure that the object had not simply been hidden behind cloud. He feels is was not a Chinese lantern because it did not move at all, lanterns usually drift across the sky or slowly gain in altitude. 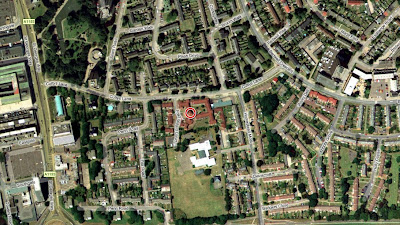 The object was unlikely to have been a helicopter, or plane flying towards his location, because these do not suddenly turn their lights out. Also there was a flying ban at the time due to ash clouds caused by a volcanic eruption in Iceland.

Despite Bob’s feelings about the sighting, this may well have been a lantern. The colour and appearance of the object tends to support this theory. It may have been moving slowly but this movement not visible due to the distance. The fact that it suddenly vanished could have been the flame inside it dying out. As it was simply a light that was on and then switched off, I cannot say either way for definate.

As you can see, Bob and Debbie have had a number of interesting sightings. It seems unlikely that these incidents were linked in any way, it is more probable they were just at the right place at the right time to experience them. The black triangle sighting was especially interesting, and seems to have been of unusual craft of some kind, possibly of extraterrestrial origin. It is a shame that Bob has been unable to locate all the UFO photographs he has taken, but if he finds them they will be added to this report. Because of what he has personally witnessed, and stories he has heard off other people, Bob certainly believes in the reality of UFOs. If him or Debbie have any more sightings he says he will keep me informed.