It was an overcast but dry morning in November 2010. Anthony Mewett was walking his pet dog on Forest View in Hailsham, East Sussex. It was 6am and still dark. The street lights were still on. As he turned a corner on the road, Anthony heard a strange low humming sound. He looked up and saw a disc-shaped object covered in shimmering multi coloured lights, giving it a rainbow-like effect. It appeared to be quite large in size, perhaps 150 feet across. The object was nearly overhead but slightly off to his right and appeared to be at a low altitude, at a height of about 200 feet. It was travelling North West at a slow speed. 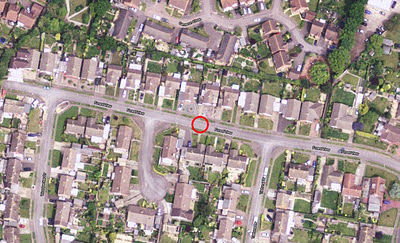 The object had seemingly appeared out of nowhere. It was only visible for a short moment, before disappearing into the darkness. Frank was shocked at what he had just seen, but was not afraid. For a time he just stood there on the spot thinking about what had happened. There was no-one else around due to the time of morning, and Frank is unaware whether anyone else saw the object.

This is an intriguing sighting, with some very interesting aspects. Due to the apparent size of the object it seems unlikely to have been an LED blimp or other electronically lit inflatable of some kind. That said, perhaps it was actually lower and smaller than it appeared to be, it is hard to accurately judge the height of objects in the sky as there is no point of reference. However if it was an inflatable then it surely would have been silent rather than making a low humming sound. This sound has been reported many times before during close encounters with UFOs, and it is one of the reasons why I feel this may be a genuine sighting.

Also we must take into account the time of morning, why would someone have launched such an object at this time? Even a late night party would generally have finished by then. If it was not a lit inflatable then what else could explain it? It was clearly not a conventional aircraft of any kind, and could not have been a helicopter as the sound of the rotor blades would no doubt have been audible. It was too large to have been a remote controlled model, and it is very unlikely someone would have been trying to play a prank on the witness at that time of morning. It appeared to be a solid disc-shaped object not just multicoloured lights, so it is unlikely to have been odd atmospheric phenomena.

Could it have been a secret military craft? This too seems unlikely as for what purpose would they fly such an object over a residential area in plain sight? Also why would they cover it in multi coloured lights making it very easy to spot?

I feel that mundane explanations for the object can be adequately dismissed, so this may well be a genuine sighting of an advanced ET craft. I have investigated other cases where very similar objects have been seen before, and although the object did not perform any intelligent manoeuvres it is still an impressive sighting.