This report covers two seperate UFO sightings by a musician named Russell Davies, who lives in the Birmingham area. His first sighting took place in mid November 2005, and his second on 4th January 2010. With both sightings a second witness was also present, and both have some very interesting aspects to them.

In 2005, Russell lived in a house on Berners Street, Lozells, Birmingham, with his girlfriend Stephanie Holyoak. At 8pm one evening in mid-November, they stepped out into the back garden so Russell could have a cigarette. It was a clear still night, and some stars were visible between patchy cloud. Russell suddenly noticed at the edge of his vision some lights in the sky. He looked towards the East in the direction the lights were coming from, and immediately spotted what looked like two very bright white orbs of light. These orbs appeared to be independent of one another. They were at quite a high altitude, Russell believes at least 1000 feet up. 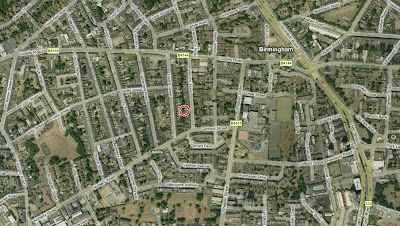 The orbs were moving at an extremely fast speed, much faster than a plane would pass across the sky. They appeared to be moving at thousands of miles an hour. They were leaving no trails behind them and appeared to be flying side by side. They passed overhead and began flying away to the West on a straight course. Russell alerted Stephanie to the lights and she glanced up just in time to see them. She exclaimed “Oh yes...what’s that?” A couple of seconds later the orbs had completely vanished into the distance and were lost from sight behind some nearby rooftops. The entire sighting lasted for 8-10 seconds.

When Russell spoke of the orbs, some assumed they may have been earth lights, but Russell does not believe this explanation. The speed they travelled at was stunning, much too fast to be aircraft.

It seems very unlikely that the objects seen were earth lights, these do not tend to appear over urban areas and do not traverse the entire sky on a straight flight path. It is also improbable they were meteorites – it is extremely rare to see more than one meteorite at any one moment. Also meteorites travel across the sky within a split second, the orbs seen were moving too slow to be meteorites, yet too fast to be conventional aircraft.

It is not known whether or not the orbs were two lights on a single larger object, however Russell believes they were two separate objects flying in formation. This is certainly an interesting sighting and one which I believe could well have been something out of the ordinary.

At 5.30pm on 4th January 2010, Russell was out in a van on the main road out of Birmingham, in the area of Balsall. He was sitting in the passenger seat.

Aerial map showing stretch of road along which the sighting took place: 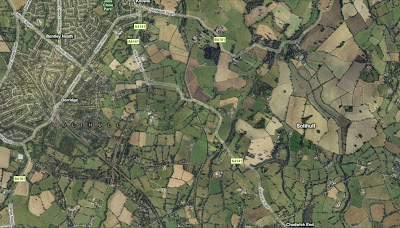 It was a cold and overcast evening but was also quite still. Looking out of the front windscreen he suddenly noticed an orange glowing orb of light within half a mile of his position, in the sky off to the right of the road. He pointed it out to the driver of the van, Michael Tingle, who initially assumed it was an aeroplane. It was hard to judge how big the object was, but Russell believes it was about 10 feet across. He estimates it was a few hundred yards high, and he was viewing it at a 30 degree angle from the van. As he and Michael watched, the orb crossed the road ahead of them. It looked to be moving about 50 mph. It remained hovering over fields to the left of the road. As the van past the object, it appeared to follow the van on the passenger side. It remained at the same velocity as the van for about 10 seconds. Michael did not see this as he had to keep his eyes on the road, but Russell informed him what was taking place.

Drawng showing the van on the road, and the path of the object in relation to it: 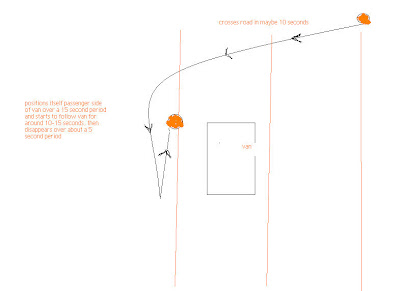 Russell felt that the object was aware of their presence and was watching them. It then slowly faded away from the top down over about 5 seconds, during which time it continued to move alongside the van. After it had vanished, Russell felt the object was still there but no longer visible, almost to let them know it was something out of the ordinary. In total the sighting lasted for about 40 seconds.

Soon after this sighting, Russell released a new music video named Alkaline Addiction, which was directly inspired by the incident. You can watch this video on our Reccomended Music page.

You may look at this sighting and immediately dismiss the object as nothing more than a Chinese lantern. Certainly some of the aspects of the sighting could fit this explanation. Lanterns are often reported as looking like bright glowing orange orbs of light. Russell admits it was hard to tell the exact distance and size of the object. Other than the way that the object appeared to follow the van and match its speed, there were no other manoeuvres which would indicate it was under control. Could this movement have been down to a sudden change in air current direction? Or even an optical illusion due to the direction/distance of the object? The way that the object slowly vanished over 5 seconds could be put down to the flame inside it burning out.

However Russell has clearly stated that he believes the object was something else entirely, for a number of valid reasons. He has seen lanterns drifting in the sky at night on numerous occasions before. He says that the object was much more solid and spherical than a lantern would usually appear. It was a still evening, yet the object appeared to be travelling at quite a speed. It also appeared to be too low to be caught in high altitude air currents. It suddenly altered its course as the van drove past and then appeared to track the moving vehicle, keeping in line with the passenger side window. Russell found this movement to be very controlled and deliberate. Lanterns have been known to remain lit for up to 45 minutes – if it was a lantern it seems very coincidental that it would burn out shortly after changing course alongside the van.

So with this particular sighting I reach an open verdict. Lantern or not? Some aspects point towards this being the case, but others tend to suggest otherwise. Ultimately it is up to you to decide what you want to believe.