Worthing is a small sea-front town in Sussex, on the South coast of England. It has a long shingle beach that runs right along the town. My friend Chris Black used to live in Worthing. When he found out I now investigate UFOs he informed me of a very interesting sighting he had back in 2003.

Back in November 2003, Chris was 18 years old. One night he was sitting on the beach alone, close to Worthing pier, looking out to sea. It was about 11pm and a clear but breezy night, the winter chill had just begun to appear. There was not much cloud cover and the stars were out. Not many people stay out late in Worthing, especially during the winter months, so there was no-one else down the beach. 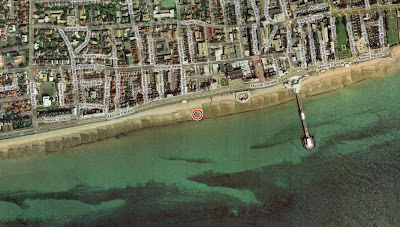 Chris was watching the waves when he suddenly spotted what he initially thought was an aeroplane. However he quickly realised it was not. He saw what looked like a large black triangular object with rounded edges and a constant bright light at each corner – one red, one green and one blue. He could clearly see that the object was solid and blocking out the stars in the night sky. The object appeared to be quite large in size, certainly bigger than a passenger jet. It was quite high up in the sky, Chris estimates about 30000 feet. The object was to the South directly out to sea, and appeared to be within a few miles of his position.

Witness drawing of the object: 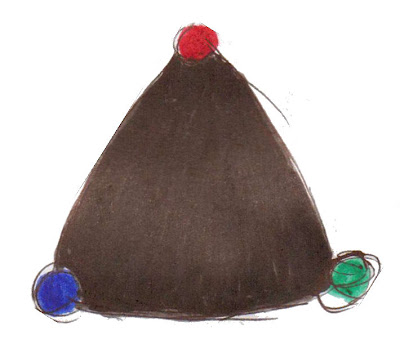 The object was completely stationary which looked extremely strange to Chris. He watched it for 5-10 minutes and then suddenly it began slowly moving. He believes it was ascending but also moving towards his position, it was certainly moving up in the sky from his viewpoint. He watched it do this for a number of minutes and then suddenly without warning all the lights went out and the object completely vanished!

Chris could not explain what he had seen at all. He personally believed it to be an extraterrestrial craft of some type, and this opinion has not changed over the years. Ever since the sighting he has had a recurring dream of seeing it, which tends to suggest that the sighting made an impression on him.

This is a very interesting sighting for a number of reasons. The appearance, apparent size of the object, and the fact that it could remain stationary for a length of time, suggests it clearly wasn’t a normal aircraft. There are no military bases anywhere in the vicinity so it is unlikely to have been a military aircraft, known or secret. If the object was some sort of balloon or inflatable, surely it would have drifted in the breeze, yet it remained still for up to ten minutes. Also how did the object vanish without trace? Chris says he was sure that it disappeared suddenly and not just moved out of his sight range. The object is far to unusual to have been caused by natural phenomena such as earth lights, and it was out to sea so this particular explanation is not valid for this reason alone.

There have been many UFO sightings reporting black triangular shaped craft with a light at each corner before. Could this be a genuine sighting of one of these craft? Chris is completely trustworthy and I have no doubt he saw what he says he did.

Chris has not had any other sightings of UFOs, however he believes he has a sixth sense and has seen ghostly apparitions on a number of occasions. I do not believe that this sighting has anything to do with these other experiences he has had, but depending on how you view ghosts you may think otherwise.

On Sunday 4th October 2009, Chris had a very unusual and vivid dream that was directly linked to his 2003 UFO sighting. The dream began with him looking down at a planet very much like the Earth, with seas and land masses. All of a sudden he started descending through the atmosphere at a very fast speed. He could not see himself, or feel the wind rushing against him, it was just a point of view. As he got closer to one of the land masses, he at first assumed it was America but then realised the shape was wrong. 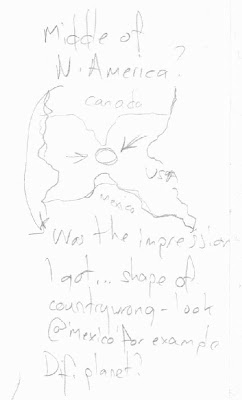 He got closer and closer to the ground, and could then make out a huge triangular shaped indentation in the ground. He reached ground level and then stopped on the spot. He was now looking at this giant indentation from one of it’s edges. 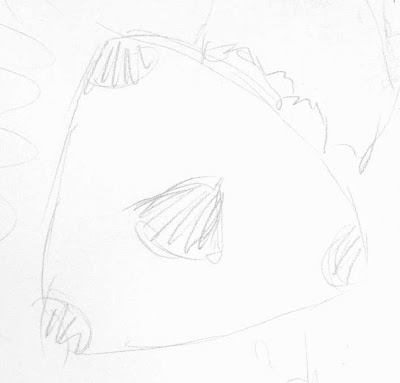 His viewpoint panned round and he could make out a crowd of strange creatures all around. They looked like a cross between a winged insect and a motorbike, but were completely organic, like the wheels were part of themselves. Their torso’s and heads looked very like that of a wasp and they had long wings folded along their backs. The creatures were milling around and chittering to each other. Chris got the feeling that they were saying to him “We’re here” but he could not directly understand them. 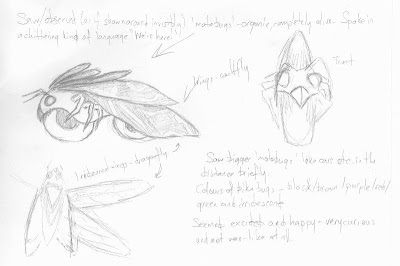 The viewpoint turned back to the indentation and he could now see a giant black-coloured craft, identical to the one he had seen back in 2003, although much bigger in size. From the side it looked almost saucer shaped but he knew that from above it was a rounded triangular shape. 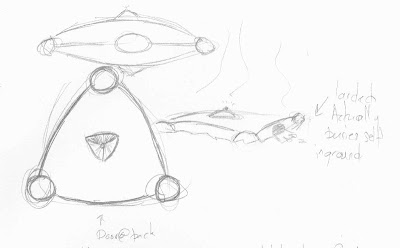 He then began moving around the side of the craft, and could make out a mountain-side with what looked like a carved tunnel entrance. He began moving towards this entrance, the creatures rolling along either side of him. He entered the hole in the mountain-side and found it was a huge underground tunnel system. The walls looked very organic rather than like those of a natural cave. 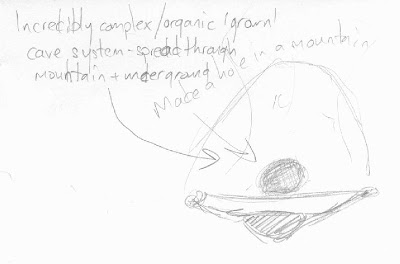 He moved down the main tunnel and could see various rooms coming off it. One of these compartments he went down into. In it he saw a row of the insectoid creatures. They were standing very still and appeared to be listening to something or someone, although he himself heard nothing. Moving back out of the compartment his viewpoint continued around the underground tunnels, almost as if he was been given a tour around it.

The dream was abruptly ended by his alarm clock going off. When he awoke Chris remembered the dream in very precice detail, more so than he would usually do. Soon afterwards he sketched out the various drawings shown here. He wonders if there is some meaning behind it. Could it be linked in some way to his UFO sighting years ago? Or did he just come up with the dream because he had been questioned about his sighting relatively recently?

The creatures he saw are very interesting. Chris has a phobia of insects and also is a biker so could this have been the reason behind their appearance? Either way, he did not get any feeling of fear from them, instead he felt that they were friendly and was not scared of them at all. If this was more than just a dream, were the creatures in it not showing their true appearance? Many contactees have reported seeing beings in the form of animals, often insects. Chris does not believe that he has been abducted and has experienced no other unusual things regarding either this dream or his sighting. However there is still the possibility so we should not entirely dismiss it. This is certainly an interesting dream, but we cannot currently say whether it is significant or not.