Out of the myriad of shapes that UFOs can appear in, the flying saucer is still the most widely recognised. This report covers a stunning close encounter of one such craft which took place in the mid 1990’s in Cumbernauld, Glasgow, Scotland. Cumbernauld is within the “Falkirk Triangle”, a known UFO hot spot which also includes Bonnybridge, a town widely recognised for its ongoing UFO activity.

It was about 7.45pm on an evening in November 1994/95 (Exact date unknown). It was a still but cold evening, with scattered cloud through which some stars could be made out. Tony was in his second floor apartment on Pine Road, Abronhill, watching TV. The apartment had a full length window, giving a wide angled view over the local area. 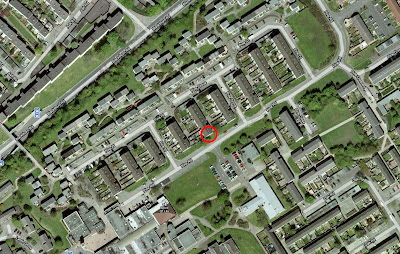 Tony’s views on UFOs and extraterrestrials were about to be changed forever. Suddenly a large glowing white object came over the roof of the apartment. Tony immediately jumped to his feet to see what was going on. The object was about 150 feet up. When he first viewed it, he was looking up at it at a sharp angle, so it appeared circular in shape. The entire object was glowing a burning white, no marking or other details could be made out. Tony estimates it was 25-30 feet in diameter. The object was moving on a level course to the South at about 40 mph.

Photograph from the sighting location in the direction the UFO was heading in: 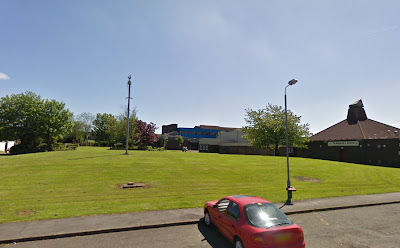 As the UFO moved further away, Tony began to see it for what it truly was – a saucer-shaped craft with a dome protruding from a curved disc. Due to the cold temperature, it was a quiet night, and he did not see anyone else around in the vicinity of his home. However, as the UFO flew right over the town, there may well have been other witnesses elsewhere. Tony continued to watch the craft for over a minute until it had moved out of sight. 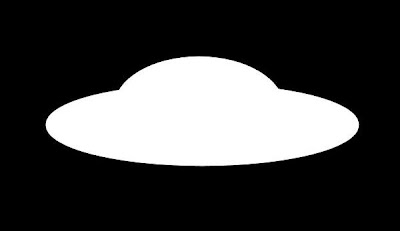 This is not where the story ends. The following day Tony went down his local pub The Maltings for a drink, the events of the previous evening still playing on his mind. His friend Barry walked in and came over to him. Before Tony had time to speak, Barry excitedly said “You’re not going to believe what I saw last night!” He went on to explain that he had been driving along Forest Road at the Southern edge of the town. Next to the road lies an area of dense trees and undergrowth. All of a sudden the wooded area lit up in a bright white flash, making it appear clear as day. It did this two more times before returning to darkness. Barry did not mention seeing any craft, and had not got out of the car to investigate. 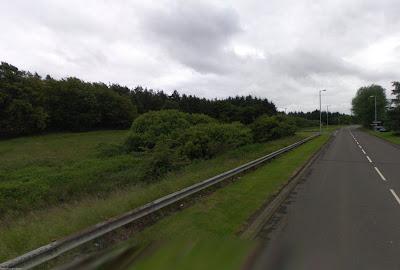 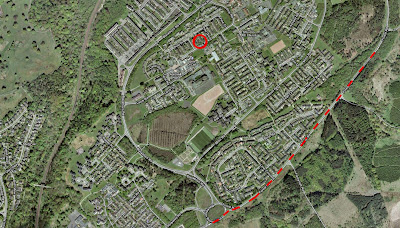 Tony asked him if the flashes had occurred around 8pm. Barry confirmed that this had indeed been the time. Tony then went on to tell him about his own sighting. The two men were convinced that the incidents were linked. Tony kept an eye on the local news over the next few days but neither the UFO or flashes of light were mentioned at all.

This is a fantastic sighting of what was more than likely a genuine advanced craft of extraterrestrial origin. Due to the appearance, size and controlled flight path of the object it is very unlikely to have been something else such as a radio controlled model or lit inflatable. It was clearly not a conventional aircraft of any kind, due to the relatively low altitude it was flying at Tony could easily make out its shape. Tony feels it is very unlikely to have been a secret military craft of some kind because if it was there would be no way they would have flown it directly over a populated town. This would be completely illogical, and I certainly agree with Tony’s views on this.

UFOs are often seen to glow after dark. It is widely believed that this is due to the anti-gravitational field that surrounds them while they are airborne. The flashes seen by Barry are also very interesting. It is highly likely that they were caused by the craft, as Tony saw it heading in the direction of Forest Road, and if the craft remained on the same course it would have been over that area at the time the flashes occurred. We can only speculate what the flashes actually were. Perhaps the craft was scanning the woodland for something. Or perhaps the flashes were linked with its propulsion system. Could the craft have even landed in the forest? We will probably never know the answers to these questions.

Because of the time the incidents took place, it is likely that there are other witnesses who are yet to come forward. The flashes were very bright and would probably have been visible to any driver heading along Forest Road at that time. If you have any further information on this stunning case, please get in touch.