It is quite rare that BUFOG receives a case featuring ET beings outside of the context of alien abduction. Even when beings are seen, they are usually commonly reported species such as Greys or Nordics. However occasionally we hear of other unusual species being witnessed. This report covers an incident where two men encountered some strange hair-covered humanoid creatures. Now much older, Thomas (name changed for privacy reasons) decided to share the details of what he and his friend witnessed.

The incident took place in later summer 1978/79 when Thomas was only 20/21 years old. At the time he lived in North Kenton, Newcastle-Upon-Tyne. From time to time he and his friend James would walk out to a field close to where they lived to go rabbiting. This field lay between Fawdon and Kenton Bank Foot. On the day of the incident, the weather conditions were ideal – clear and sunny – so the men decided to head out to the field with their hunting dogs.

They left home about 9.30am, and it took 20 minutes to reach the field. They headed across Hillsview School field, and then onward along a dirt track that lead to their destination. There was wheat covering the fields at the time. The men let the dogs loose, and got to work searching the field for rabbits. They spent the entire day and evening at the field.

Aerial map showing the location where the field used to be: 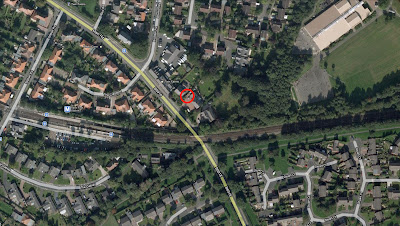 Photograph of how the area looks today: 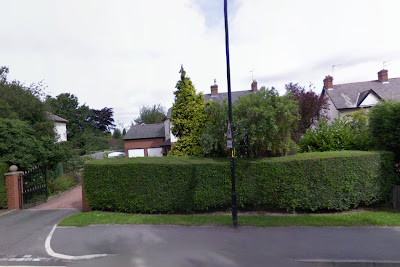 It was between 10-11pm. The moon was just starting to rise in the sky, but was still quite low and large, providing quite a lot of light. After a long day the boys began their walk back home to the East. They were walking back along the dirt track, when suddenly they noticed some movement in one of the fields ahead of them and off to the left of the track. Stopping to take a proper look, they noticed two short figures. At first they thought it was some kids. They decided to scare them by lifting the dogs up, but soon realised that the figures did not appear to be human.

Photograph of where the dirt track used to be, taken from the location the witnesses were at in the direction they first saw the beings in: 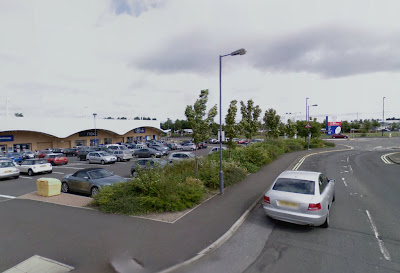 Photograph of the Tesco’s supermarket that now stands on the spot where the beings were first sighted: 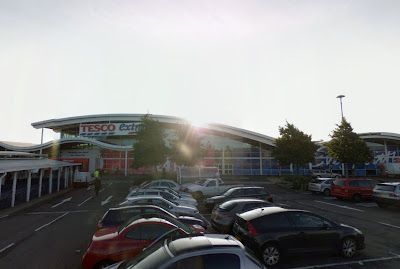