Early afternoon on a cloudy and windy day in May or June 2010, Jim (name changed for privacy reasons) was in his office on High Street, Dowlaise, Merthyr Tydfil in South Wales. He decided to glance out of the window. His office overlooks the district of the town. A local church, St Illtyds, makes up part of this view. The church is about 600-700 metres away from his company’s office building.

Aerial map showing the location of St Illtyds. High Street is South of it: 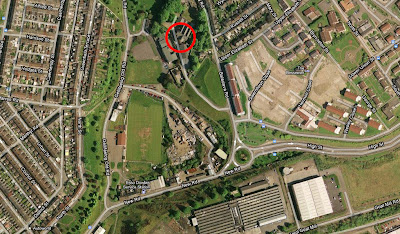 Aerial photograph of the church: 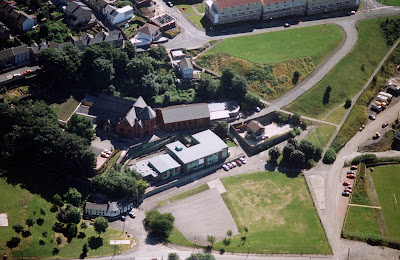 While staring out of the window a small object in the air over the church caught his attention. Directly above the steeple, about 12 feet above the top of it, was a grey/dull silver coloured sphere. It looked between the size of a foot ball and a beach ball. The sphere was completely stationary, which completely perplexed Jim considering the fact it was a breezy day. He continued to watch it. After about 30 seconds it suddenly started to ascend upward at a slow but constant speed. Jim was astounded at how controlled it appeared – it did not look like it was randomly drifting. Within 30 seconds of it beginning its ascent, it vanished into some cloud.

This is an interesting sighting of what may well have been a genuine ET craft. Small silver spheres are one of the more commonly reported types of UFO, and have been seen all around the world. They are often seen to perform intelligent controlled manoeuvres similar to what Jim described. Due to their size they are widely believed to be unmanned, and are probably used for observational purposes.

Obviously some silver sphere sightings may well be misidentification of stray balloons drifting in the sky. However the manoeuvres this object performed seem to suggest that it was under control. It was a windy day and yet it remained motionless for a short while. Then when it did start to move it went straight upwards and at a constant speed. If it was a balloon or other drifting object it would surely have been buffeted around in the breeze. Due to its small size it is not out of the question that it was a remote controlled model or military drone of some kind. However it had no visible means of propulsion or lift. Due to the fact that UFOs such as this have been seen and reported many times before, I feel that it may have been one of these craft.