Out of all the cases I investigate, the majority tend to remain unexplained or I feel that an advanced craft of unknown/extraterrestrial origin is the most likely explanation. However occasionally I receive a case which I am able to solve beyond reasonable doubt. This is one such case. It is a great example of how a mundane object can be misperceived as something out of the ordinary due to a prior lack of knowledge about it. The fact that the object was captured on video camera certainly aided in its identification.

The incident took place on a day in May 2010 at 2.30pm in the afternoon. The witness Andy (name changed for privacy reasons) was out in the back garden of his house on Gladstone Road, Hoddesdon. He had been putting up some garden furniture and was having a well deserved break. It was a hot sunny day with no clouds in the sky and very little wind. 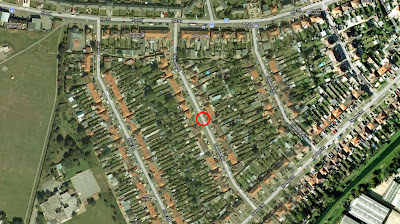 An aircraft caught his eye and he glanced up at it. As he did so he noticed another object in the sky to the South. The object was shaped like a long thin cigar. It was gliding slowly across the sky and appeared to be about 90-120 feet in height. Andy decided to go and get his camcorder from the house so he could zoom in on the object. He returned to the garden, zoomed in on the object and began to watch it via the camera screen.

Despite the fact that his camcorder is not very high quality, he was still able to get a clear view of the object. To Andy it appeared to be metallic silver in colour. It looked about 30 feet in length. Initially he thought it must be some kind of inflatable, but as he watched its movements seemed unusual and controlled. As well as moving along in a straight line, it also appeared to be rolling over in a clockwise direction. As it did so he suddenly saw what appeared to be multi-coloured lights running along it. These would flash up brightly for a moment before dying back down. The object then gradually slowed down, before starting to ascend at a sharp angle.

After watching the object for a couple of minutes, Andy decided to go round to the houses next door to him to get his neighbours so they too could see it. He ran around to the front doors of the houses, but nobody was in which frustrated him. He ran back into the garden expecting the object to still be present, but it was no longer visible. Andy wished he had stayed put so he could have witnessed the object leaving the area. It was a clear sky so it seemed odd that it was now gone.

In the days following the sighting Andy told numerous friends and family about the sighting and showed them the video footage. Nobody could explain what he had managed to capture, and some of the people he showed were impressed with the unusual movement and lighting displayed.

Below is the un-edited footage that Andy managed to capture of the object:

Here is a zoomed still of the object from the video footage: 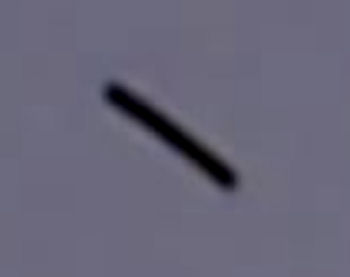 Below is a zoomed still of the object with the multi-coloured lights visible: 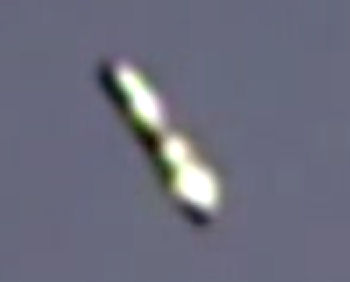 When I received the initial sighting details off Andy it was initially hard to say what the object was. I thought that it may be an inflatable, however this did not really explain the coloured lights or apparent large size of the object. However once Andy sent me the video footage to take a look at, it was immediately clear what the object in fact was. What Andy had witnessed and filmed was almost certainly a solar airship. These are long black tubes made out of thin plastic and filled with air. On a hot day, the air inside heats up causing it to lift into the air. Usually solar airships are tethered with a kite string, however it looks like the one Andy filmed was either intentionally un-tethered or it had broken free from its tether and was drifting across the sky in air currents.

Photograph of a Solar Airship up close: 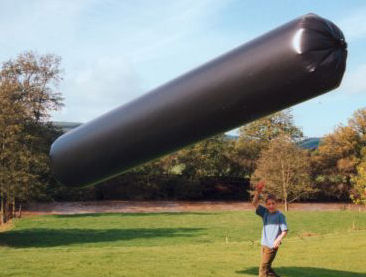 The “coloured lights” which can be seen at various moments of the footage is in fact the sunlight being reflected off the smooth surface of the airship as it moves and rotates. It was probably this that caused Andy to interpret the object as being a metallic silver colour rather than black. The movement pattern of the object can just be put down to air currents it is caught up in. When Andy returned to the garden and found the object was no longer there, it had probably just drifted off out of sight.

Due to the clarity of the video footage and the fact I have seen similar footage numerous times before, I am certain that the object is a solar airship, and therefore this case is closed.