Most UFO sightings tend to fit into one of a number of common shapes, including discs, spheres and triangles. However sometimes very unusual objects are seen which do not fit into any of these categories. This report details a multiple witness sighting of one such object. One of the witnesses named Dan Rimmer got in touch with me in July 2011 via Richplanet.net to report the details of the incident.

It was 6.30pm on a clear and still evening in May 2009. Dan and his friend Gareth were out driving North from Burscough towards Southport on Pippin Road. There was no-one else on the road at the time, it was quite quiet.

Aerial map of Pippin Road showing the approximate location of the sighting: 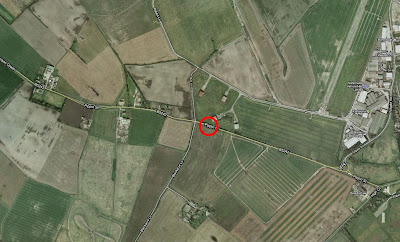 They suddenly noticed a strange object in the sky moving in an Easterly direction across the road in front of them. The object looked like a triangular cuboid shaped block with thin arms protruding from it diagonally underneath and at the front and back. The main body of the object was charcoal black in colour. The arms sticking out of it were dark grey in colour, and separated into two at the end. It appeared to be about the size of a large car. Dan estimates it was about 35 metres in the air, and 50 metres in front of them. 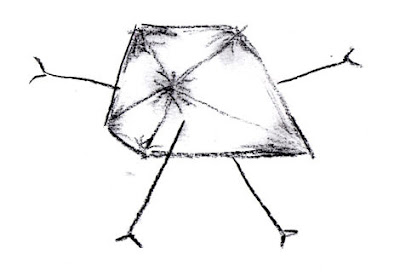 The object was moving about 25 mph. It passed over the road as they approached it. As they drove closer they discussed it with each other. Both witnesses were shocked by what they were seeing. They parked up he car to continue to watch it but when they got out they could no longer see it, it had seemingly vanished into thin air. This was quite bizarre as there were only flat fields either side of the road so there was nothing it could have been hidden behind, it was just gone. The witnesses continued their journey discussing what they had just seen.

Aerial map showing the approximate route of the UFO: 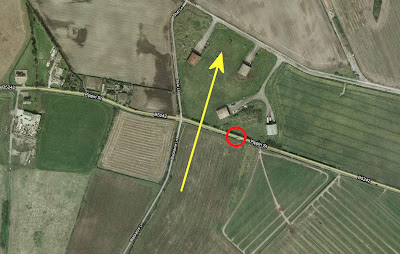 Dan soon told his family and friends about what they had seen but they did not believe him. He is convinced that what he saw that day was an unusual advanced craft of some kind. He was astounded by the sighting and ever since has regularly contemplated what it could have been.

Sadly Dan has since lost touch with Gareth so I am not able to speak with him about the incident.

The appearance of the object in this incident is truly bizarre and I have not investigated any cases where a similar object was reported. The shape of the UFO and the strange “arms” protruding from it are both very unusual, although stick-like attachments are not completely unheard of. The spheres dropped by the craft in the famous Livingstone UFO incident had numerous arms sticking out of them which gave them the appearance of old sea mines.

The biggest question is of course whether or not the object was a genuine advanced craft or something else. The object did not move at a very fast speed nor did it make any unusual manoeuvres which would designate intelligence. So could it have been a strange inflatable object of some kind, perhaps an art project? Or an elaborate kite which had become un-tethered? There is even the possibility it was a strange military drone, though there were no visible propellers or other means of keeping it airborne.

These possibilities cannot be completely ruled out, though if it was one of these then where did it suddenly vanish to? Surely it would still have been visible in the sky travelling away into the distance? Perhaps it was under radio control, and was quickly brought down to the ground somewhere out of sight after it had headed over the road. However it appears to have been quite sizeable, and there was nothing but flat fields in the area.

If it was a genuine craft then it was certainly of a very unusual type. What can be made of the protruding arms? Were these landing legs of some kind, or could they have been used for another purpose, perhaps to monitor the surroundings or to grab hold of objects.

I have looked around online but cannot find anything mundane which could have been responsible for what the witnesses saw. If you know of anything which it may have been, please get in touch. For now the true origin of the object remains a mystery.