Helen and Barry moved to their current address, a quiet cul-de-sac in Huntington on the edge of Cannock Chase in July 1990 when they were both 43 years old. They have a good view from their lounge to the North of both open fields and dense forest. 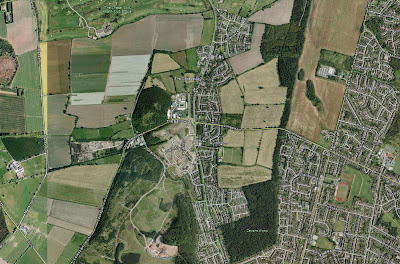 One night in May 1992 the couple were sitting outside when they noticed a bright white light to the North over the Chase. As they watched, the object moved up and down, side to side, and periodically shone down a bright beam of light to the ground. Due to these movements they initially assumed it was nothing more than a helicopter. However suddenly the object vanished, leaving nothing but a red trail across the sky for several seconds! The couple were amazed by what they had just witnessed.

The following evening the same object was back in the sky again, roughly the same place it had been previously. Helen and Barry began watching it intently. To Helen the object appeared more long than round in shape, it reminded her of a dragonfly. After a short while a red glowing orb of light appeared below and to the left of the main object. Soon after this a second red orb appeared below and to the right. The two red orbs moved closer together until they were directly under the main object. Then all three unidentified lights vanished at once.

Astoundingly this same thing began happening every night for the rest of the week. It always happened at the same time in the same location. Helen and Barry informed their teenage children and their next door neighbour of the objects, and on numerous evenings they too saw them. After about a week the lights no longer appeared in the sky.

However this wasn’t the last time they were seen. They appeared on several other weeks between June and August. Each time they would reappear for numerous days in a row.

In July one of their neighbours was having a leaving party for a Scandinavian exchange student who had been visiting for the week. During the evening, the unusual glowing object was once again seen in the sky, this time very low down. Their neighbour found some binoculars and some of those present managed to get a closer look at the object. Like usual, the two red orbs appeared underneath and then the lights appeared to fly away in a North Westerly direction extremely fast. The exchange student was astounded by what she had seen.

The UFOs appeared so regularly during those months that it became quite common to observe them. Barry would just say to Helen “You friend’s in the sky again tonight!” The couple were unsure if anyone else also noticed the lights in the area; if they did they kept quiet about it. Helen used to regularly check the newspapers to see if anything was reported but the lights were never mentioned.

At the end of August for the bank holiday weekend, the family decided to go on holiday to Tywyn in Wales where they own a caravan. Their eldest son travelled with his sister in his own car. Barry and Helen travelled in their car with their 5 year old son. They set off in the early hours of the morning at about 2.30am to avoid the traffic. About 10 minutes into the journey Barry realised that the car was not driving fast. They advised their son to split up from them and take the M54 motorway from Featherstone. They assumed that the reduced speed was due to some unclean petrol. Barry decided that the best course of action would be to travel back home, siphon off some of the petrol, then they could top it up at a 24 hour petrol station, before travelling on the A5 to Telford.

When they arrived home they found that the car was responding a bit better, so decided to continue their journey through Penkridge to the A5 without bothering to stop to siphon off