At 2.30pm on a clear sunny day in March 1996, Darren was around his grandmothers flat. The flat was on the 2nd floor of a 4 storey building. He was sitting on his bed in the room he was staying in when something suddenly caught his eye up in the sky visible through the bedroom window. He got up and went to the window to see what it was. He saw a rotating black triangular shaped object over the suburb of Kinning Park to the East. It appeared to be between 12-15 feet across and 5-6 feet in depth. It was about 100-150 feet off the ground. 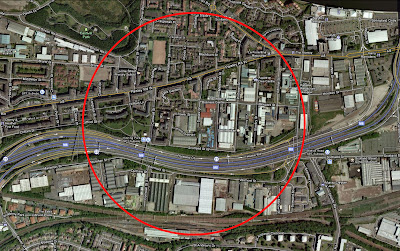 The object was travelling on a straight and level course in his direction. It appeared to be moving between 40-50 mph. Darren was both amazed and frightened, and was aware that it was something very unusual. As the UFO approached it continuously rotated on a horizontal axis. The object took about 30 seconds to reach the flats. As it passed overhead he ran through to the living room window to continue observing it. He alerted his gran Rosemary, and she also came to the window. Both witnesses then watched it disappear into the distance to the West.

A few minutes later a police helicopter appeared in the area West of their location. It remained for about a minute, then turned and headed North. Darren is unsure if this had anything to do with the UFO or not.

The object seen in this case seems quite unusual, especially considering it was continuously rotating. Black triangular shaped craft are one of the more commonly reported UFO types, however they are rarely reported as rotating in the way that Darren describes, they tend to fly with one of the three points facing forward. We cannot completely exclude the possibility that it was a large inflatable of some kind that was drifting in an air current and tumbling on its axis, however it would be expected that it would rotate on other axis as well not just spin one direction continuously.

The fact that the object flew right across the sky means that it cannot have been a tethered kite. It was clearly not a conventional aircraft of any kind. Nor did it look like any known military drone, and there would be no reason for the military to fly such a device over a highly populated city in broad daylight. The fact it took place in the day time means there were more than likely other witnesses to this object who have yet to come forward.

Unfortunately Darren’s gran has since passed away, and he has not got back to me with further information on this sighting, so at present this is all we are aware of.