On the evening of Saturday 14th September Birmingham UFO Group headed to Great Malvern for a UFO sky watch. Up until this point we had only ever held sky watches at Cannock Chase, so it was nice to travel to somewhere new. The Malverns seemed like the perfect location for a sky watch due to the stunning view of the sky and surrounding area.

In the week running up to the sky watch, the weather had been less than satisfactory, with regular rainstorms and heavy cloud cover. However as the evening of the 14th approached, the weather took a turn for the better! As with previous sky watches, it seemed to be on our side.

We arrived at Great Malvern around 6.30pm and initially headed to the Foley Arms for a drink and some food. Here we met up with the other sky watchers, some of which had never met with the group before. We sat out outside extremely happy with how pleasant it was. 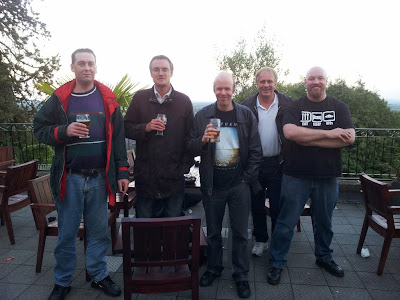 One of the attendees had not turned up because of adverts that had been sent out to our mailing list and put on the website. I was pleasantly surprised to learn that there had been an article about the sky watch in the Birmingham Mail! Below is a link to the article:

Not sure whether someone tipped off the newspaper about the sky watch or if they just randomly came across it and decided to base an article on it. Either way I was pleased for the additional coverage!

Around 8.30pm we set off from the Foley Arms to the North Quarry car park. When we arrived there we found it to be largely empty of vehicles and also extremely dark. It was very still and quiet – or at least would have been if it wasn’t for the constant UFO banter and talk of what horrors may lurk for us among the nearby trees! 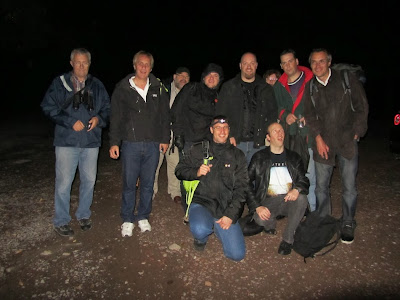 After gathering our gear and checking our torch batteries were not about to run out, we began the long walk up to the sky watch location close to the top of the hills. BUFOG member Paul’s estimation of 25 minutes seemed a little generous. That said, he did march off ahead at a brisk pace in order to get the disposable BBQs he had brought with him set up as soon as possible.

The rest of us took our time walking up the zig-zagging pathway, which became unnervingly narrow in places. Off to one side of the path was generally a steep drop covered in brambles, nettles and other dense vegetation. I figured everyone would be careful enough not to fall off the side. I was however proved wrong when one of the sky watchers (you know who you are!) accidentally lost his footing and almost brought the sky watch to an early and possibly fatal end. 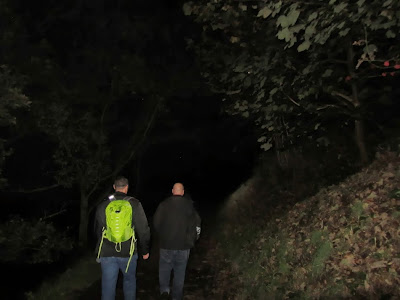 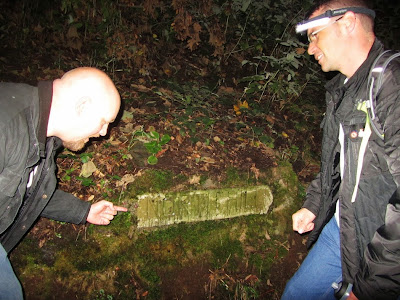 We didn’t walk right to the summit of the hills, instead we opted for a nice wide open area of path way about 2/3 of the way up. The top was a further 25 minutes walk away that nobody really wanted to be bothered with, especially as we would have to make the journey back down later on. As we arrived at the location we caught sight of Paul’s face lit up by the glow of the BBQ coals like some kind of malevolent floating head! Just like last time, the official BUFOG BBQ King was on top form and was already up to cook some hot food for everyone.

The location was perfect for a sky watch. We had a clear view of the majority of the sky, although the view to the East was partially blocked by the remaining hillside. There was plenty of space to sit down, including a bench for admiring the view over Great Malvern. The lights of the town could be seen far below us, and it was even possible to see the distant lights of Birmingham on the horizon. 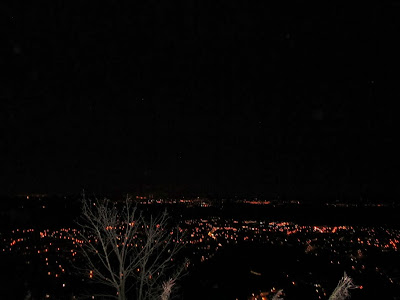 Soon after arriving we noticed a firework display going off. It looked so low down to the ground, and gave us some impression of exactly how high we had climbed. There was a clear star lit sky above, not a cloud in sight. While continuing to socialise, at any one time at least some of us had our eyes on the sky. It wasn’t long before people caught glimpses of shooting stars and satellites moving slowly overhead. The area was relatively free of air traffic, other than a few distant helicopters with their immediately recognisable flashing navigation lights. 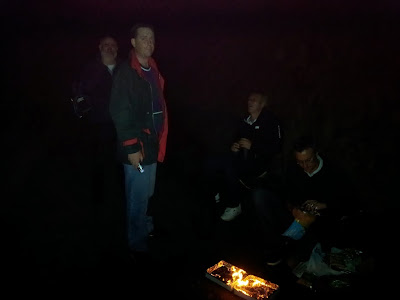 It wasn’t long before the food was ready. A superb selection of sausages, chicken wings and even some steaks. Top notch nosh by anyone’s standards! One of the sky watchers had brought with them a couple of powerful laser lights, which at one point were used to help speed up the BBQing. So one lucky person no doubt got to try some laser-cooked chicken! Never know what to expect at a BUFOG sky watch. 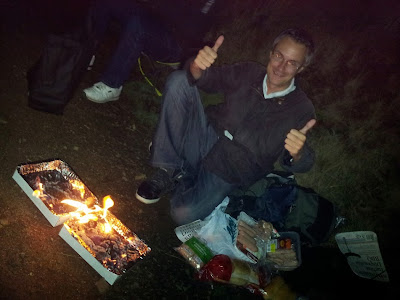 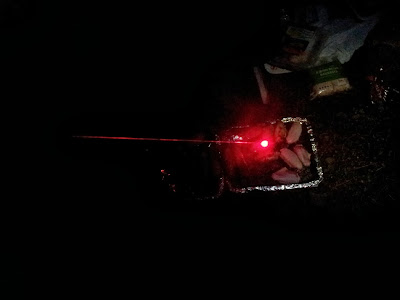 At about 11.30 pm we were quite spooked to see someone else in a long trench coat walking along the path towards us. He did not stop to engage in any conversation, and just carried on walking away into the darkness. Popular consensus was that it was a local out for a night walk. However that didn’t stop people from coming up with other spooky suggestions which included the ghost of someone who had died on the hills, or a member of the secret service spying on what we were up to! It was amusing, but that didn’t stop me from shining my torch along the path at regular intervals just in case... 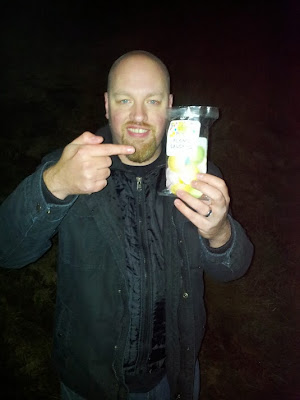 It was a very pleasant night, but by the early hours it was starting to get a little cold, so at about 1am we all decided it was time to call it a night and head back down to the cars. The walk back down the hill was a little easier for obvious reasons, and everyone soon made it back to the car park safely. We were just packing up and saying our good byes when a police van with two female officers in came driving up the car park towards us. I can only assume that a local had seen the torches in the car park and alerted them to our presence. It didn’t take long for me to explain what we were all doing there standing in the dark. They seemed happy enough with the explanation and were soon on their way.

Soon afterwards we too left and began the journey back to Birmingham. I had a full car load with me and several stop offs to make. When I finally made it home at around 3.45am I was grateful that we hadn’t tried staying later up on the hills!

And so the first Malvern Hills BUFOG sky watch came to a close. There had been no UFO sightings, but that didn’t seem to bother anyone. It was just great to be out there as a group chatting about interesting topics under the stars. And who knows....there’s always next time! I’m sure we will be back to the hills again some point in the near future.

Actually I say there were no UFO sightings. We did manage to capture a number of highly unusual photos through the evening. Check out the below shots and see if you can work them out before reading the explanation following each one. 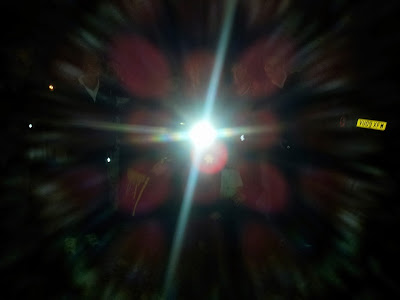 No we're not getting attacked by a glowing orb. This is what happens when you shine a bright torch directly at a mobile phone camera! 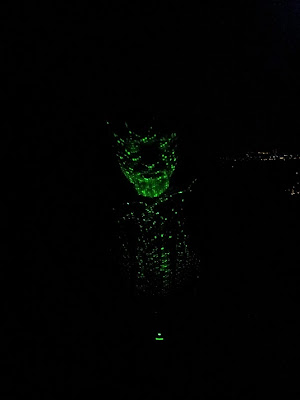 Is this a visitation by an extra-dimensional being? Or is it my face lit up by a green patterned laser light? You decide... 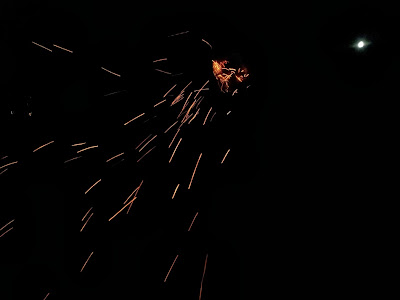 A trail of bright orange sparks floating spookily in the air. Their origin - the remains of the disposable BBQ being lightly shaken. 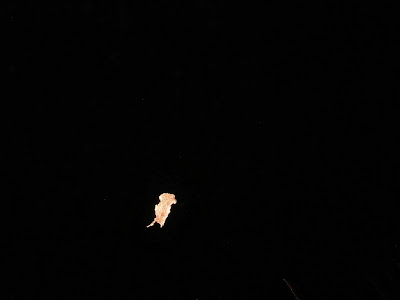 I was initially very confused as to what my brother had managed to photograph here. It was only once he’d explained that it became clear. The bizarre wobbly-looking thing hanging menacingly in the dark sky is in fact a steak that he threw into the air and managed to capture in the camera flash! Not so much an Unidentified Flying Object, more so an Identified Food Object. Don’t have nightmares, do sleep well...