In most extraterrestrial encounters there appears to be no interaction with the witnesses, they are merely observers of something extraordinary. However occasionally there can be actual contact with alien beings and communication on numerous different levels. Sometimes these experiences can have a profound and long term effect on the people involved. This seems to be the case with Emily (name changed for privacy reasons), who earlier in her life had a fascinating encounter with what she believes was an extraterrestrial intelligence. Her experiences were quite unusual and have had an impact on her life ever since.

Emily believes her experiences began towards the end of 1974 when she was 29 years old. At this time in her life something strange began to happen. She felt she was being surrounded by a strong force of some kind, and that this force was causing her to think more about the spiritual side of her life. At the beginning of February 1975 she began to experience symptoms usually associated with pregnancy, but Emily knew that she wasn’t pregnant. This lasted for several days and then stopped. Were these events in some way linked to what was to come? Or did they just have a mundane explanation? Either way, things were about to take a much stranger turn. On the evening of February 23rd she suddenly began to feel feverish and went to bed. About 2-3am she awoke to what seemed to be someone turning the bedroom door handle. The kids were in the bedroom with her and her husband was away so she knew it wasn’t them. She was a little afraid so remained in bed. Next there was a single loud knock on the door.

Shortly after this she saw directly in front of her a small silvery ball of light at the foot of her bed at eye level. She thought to herself “What is that and where on earth did it come from?” She checked the window to make sure it was not light coming through or reflected from it but the curtains were fully closed. The light began to change shape, becoming longer and longer until it resembled a vertical strak of light, emitting a bluish-white glow. The light moved along in front of the bedroom wardrobes. It seemed to be keeping its distance from her, which she attributed to some form of intelligence, as if it were aware of her presence and did not want to alarm her. She then noticed another similar light at the bedroom door. As the initial light reached this other light it seemed to join up with it and then disappeared. She then fell into a deep sleep. A couple of hours later she woke up with a heavy pain in her stomach and lower back as if she was about to give birth. After a while this pain slowly subsided and she went back to sleep.

In the morning she thought about the lights she had seen and wondered what they were. She told her husband and friends, and they believed she had had some sort of vision. However she found this difficult to comprehend and thought there may be another explanation. Four weeks later in the early hours of March 24th she suddenly woke up and felt the need to look around her room. She saw two small balls of yellowish-red light to her right, closer to her than the previous time. One was positioned above the other one. She sat up in bed, curious as to what they were.

Watching them she said out loud “I accept your presence. What do you want?” There was no reply but again she sensed that they were some form of intelligence. The upper ball of light disappeared. The other one slowly floated right up to her face shining in her eyes. It backed off a short distance then performed the same action again. After moving back a second time it then appeared to put on some sort of display, brightening and dulling like a twinkling star. During this it appeared a bluish-white colour similar to the first time she saw the lights. It then moved away towards the wardrobes and disappeared. Emily still believes it to be the most supernatural thing she has ever seen. After the light disappeared a peaceful feeling came over her, which lasted most of the next day.

Two weeks later she began to experience a feeling of warmth emanating around her waist. This feeling came and went at various times. She had a dream that seemed to explain this warmth. In the dream she felt like she was connected to a universal higher power related to light and energy.

She would not see the lights again until June. Again in the early hours of the morning she was awakened from her sleep. This time a light appeared on the wall of her bedroom. It appeared in the shape of a vertical bar of bluish-white light with a ring of light around the outside of it. She watched it disappear and reappear a while before dropping off to sleep. At this time she was not aware of the lights significance.

Early morning on October 18th she awoke to see a light in her bedroom once again displaying the shape of a bar with a ring around it. She felt it was trying to show her something of profound spiritual significance, and that she had to find out what it meant.

After her encounters with the lights, the feeling of heat radiating from inside her continued. Over time it moved up the centre of her back. Two years later she finally plucked up enough courage to visit her GP and discuss these feelings. He could provide no answer to either the lights or the heat, other than to say she seemed to be mentally stable. Over time the feeling of heat moved up to the top of her head, and then down onto her face and throat. After searching for answers in various books, Emily came to the conclusion that these feelings of pain/heat were the awakening of latent energy within her body, the opening of some of her seven major Chakras Centres.

Emily also believes that some form of telepathic communication began after her experiences, where she would receive words or information directly into her mind. In early 1985 she received three words that were constantly impressed upon her against her wishes – atom, alchemy and transmutation. She tried to ignore this but found she could not, and in the end decided to start reading up about the meaning of these words in science books. Later she received another telepathic message telling her to relate the science of the atom to herself and that she would come to understand. She also received telepathically two geometric symbols – a circle within a triangle, and a triangle within a circle.

After all the years that have gone by Emily now feels she understands her place in the universal cosmos. She believes that the opening of her Chakras was the direct result of her experiences with the lights, and that this in turn heightened her sensitivity and telepathic abilities.

The below explanations are what Emily has come to believe are the reasons for the shapes the lights took on the numerous occasions that she saw them, and the symbols she received telepathically:

Symbolised the beginning and the end. In it’s vertical position it is then possible to create any other shape/form from it, in the same way that energy can change it’s form. 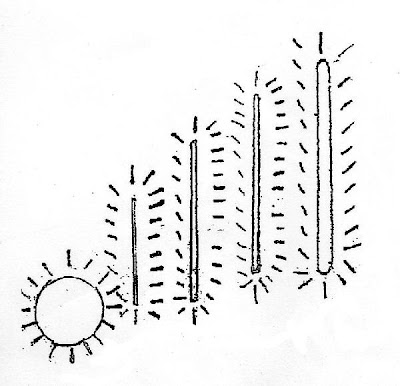 March sighting – Two balls of light, one positioned above the other: The balls of light themselves symbolised orbital completeness. Their formation symbolised “as above, so below” – a message that the human race is not alone in the cosmos, and that we and the ETs are all part of the same universal energy. 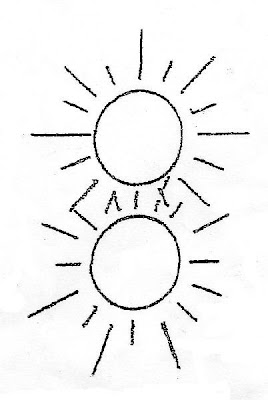 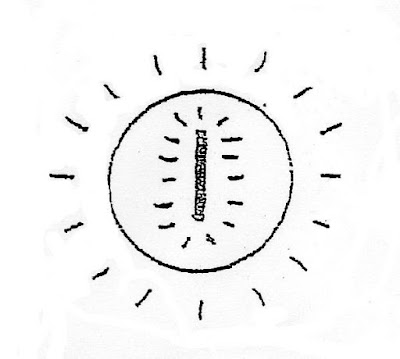 Telepathic symbols – Circle within a triange, and triangle within a circle: Emily believes these represent universal equality, that on a universal level all things are related and equal.

In searching for answers for all of this, it is quite hard to come up with an explanation as Emily’s experiences are so unusual. They involve a combination of factors, which may or may not be extraterrestrial in nature. In regards to the various lights that she saw, there could be numerous possibilities. Emily states that she felt unusual/feverish before sighting the lights for the first time. Were they some form of hallucination or dream brought about as a direct result of illness? Emily claims that the curtains were fully drawn in her room, but was she mistaken? Perhaps the lights were simply caused by a light source outside of her window. However this theory cannot explain the later sightings which appeared to be hovering close to her face and performing manoeuvres in the room. Could the lights have been caused by electrical phenomena such as ball lightning? There are numerous documented cases reporting ball lightning appearing as small bluish-white or yellowish glowing orbs of light which slowly drift around. But this would not explain how the lights changed shape in front of her eyes. There is the possibility that the lights were phenomena of another kind altogether, such as spirit energy. Or were they, as Emily believes, an extraterrestrial intelligence that was making contact with her?

As for the feelings of pain and heat that she experienced at various times, could these have been caused by illness, or were they really linked to the light encounters? It seems too much of a coincidence that they started around the same time in her life. Also she did visit both a GP and a psychiatrist, who declared that she was fit, both physically and mentally. Whether or not you believe these feelings were caused by the opening of her body chakras is a totally different subject, so it will not be covered in any more depth here. It is hard to speculate about the telepathic communications Emily has stated she received. Were these real or imaginary? Could they have been brought on by her willingness to search for answers to her experiences or was a genuine extraterrestrial influence at work?

Emily certainly believes that her experiences were extraterrestrial in nature, and it has changed her life profoundly in many ways. She still searches for answers to what happened, and wonders what the future has in store for her. I am sure you agree it is a very interesting case.