On Saturday 22nd May I and my friend Chris drove up to St Annes from Birmingham to attend the LAPIS (Lancashire Anomalous Phenomena Investigation Society) UFO Conference for the first time. It was to be an absolutely fantastic day of listening to lectures and meeting up with old friends. The weather was absolutely stunning – one of the hottest days of the year so far. Clear blue skies and streaming sunlight made the journey to St Annes very pleasant indeed. 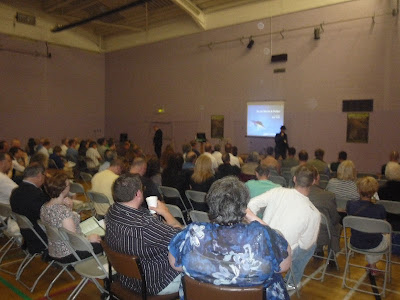 We arrived at 10.15am, 15 minutes before the first lecture ws due to start. The conference was held at a spacious sports hall in the YMCA (sing it) on St Albans Road. We immediately met up with Martin and John, two regular BUFOG members who had also made it to the conference. I then went to have a catch up with two of my friends from the UFO circuit – Larry Warren and Phil Mantle, who would both be speaking later in the day. For any of you who don’t know, Larry is one of the key witnesses and also whistleblower of the Rendlesham Forest UFO incident. Phil Mantle is one of the Uk’s most well renowned and experienced UFO researchers. Larry showed me a number of his paintings that were on display, including one directly based on what he experienced at Rendlesham. I had a brief look at some of the other merchandise tables around the room, and was surprised to see a number of bigfoot footprint casts on display by Paul Vella. 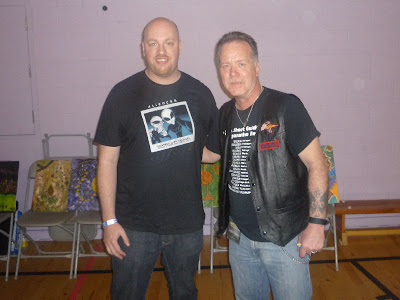 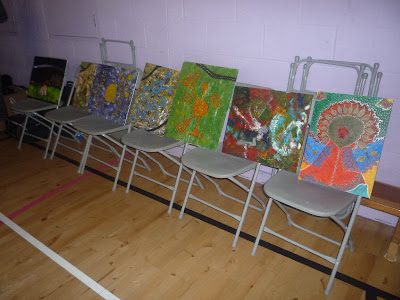 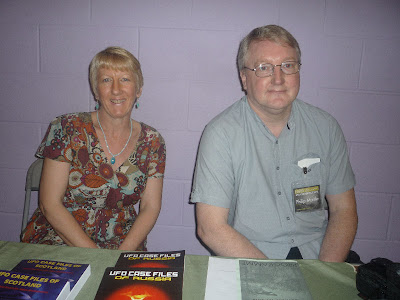 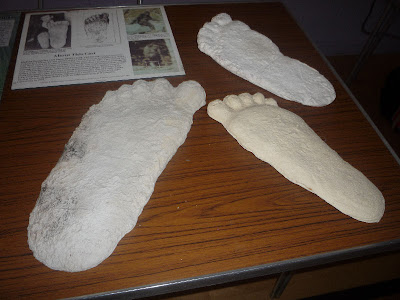 Soon it was time for the lectures to kick off, with Paul beginning proceedings. Paul is one of the UK’s leading experts on bigfoot. However considering the theme of the day, he had opted to give a talk linked with UFOs rather than elusive hairy creatures! His lecture was all about the portrayal of aliens and UFOs in movies over the last century up to recent times. He proposed that individuals involved with the UFO cover up may have influenced these movies and decided on how they were portrayed at various times. It was brilliant fun seeing the old B-movie posters featurning hideous alien creatures and terrified humans! He also showed a hilarious trailer for a black-and-white film named “The Giant Claw”, which featured what can only be described as a giant killer prehistoric turkey. Oh yes. 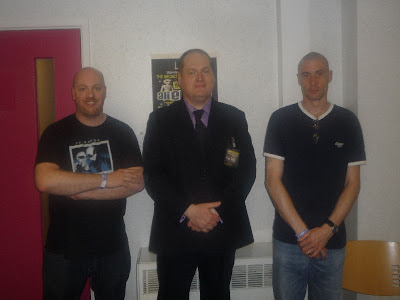 I was surprised to see that Paul didn’t feature the most recent UFO-themed movies such as The Fourth Kind or District 9, but other than this it was a great look back through the history of UFO cinema. 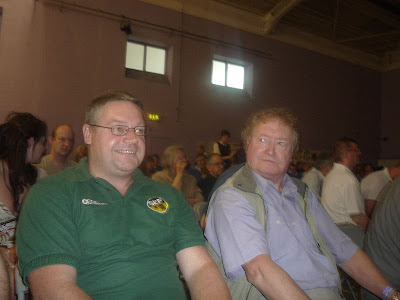 After a short break it was then time for Phil Mantle to take to the podium. I always enjoy Phil’s lectures, and this one did not disappoint. It was a general look at lots of very interesting cases. He began by talking about sightings around the Yorkshire area, including those by the late UFO researcher Tony Dodd. He even showed some photographs Tony had taken of unusual glowing aerial objects. The second half of Phil’s talk covered a number of fascinating contactee cases. These included well known cases such as the Alan Godfrey incident, and the Ilkley Moor abduction, which led to the famous photograph of the ET being that the witness had snapped before it ran away. It truly was an informative lecture on some highly convincing cases. Phil ended up speaking a bit about the new UFO publication which he is launching in July – UFO Matrix. This is intended to be a commercially available magazine on the subject, and I wish him and Malcolm Robinson all the best with it. I for one will be subscribing as soon as it hits the shops. 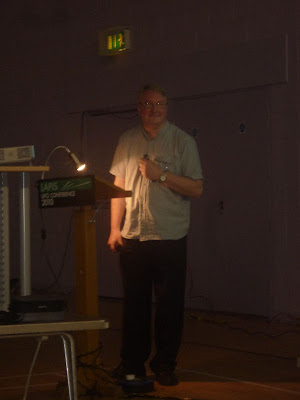 At the half way point of the conference, we stuck with time honoured tradition by finding the nearest pub and getting some lunch and a quick pint. Over lunch I chatted with Sasha Christie (contactee and researcher), Larry, Jason from the LAPIS crew and new friends Nathan and Luke who were experiencing a UFO conference for the first time. 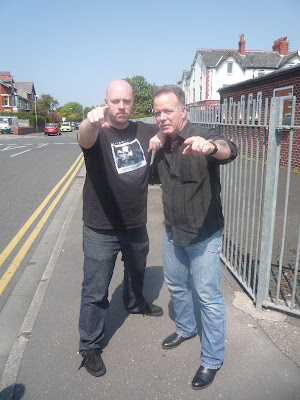 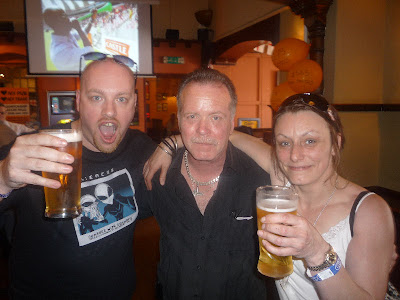 The first speaker of the afternoon was Alan Murdie. Alan writes about UFOs for Fortean Times magazine, and is a former chairman of the Ghost Club. His lecture focused on UFO incidents from Columbia. There have not been many significant sightings from here, however he covered an incident where a strange metallic object crashed in the Columbian jungle spreading debris over an area. This debris was promptly cleared up by the US military and was never seen again. Alan also covered some other interesting features and mysteries of Columbia, including statues with large dark eyes and a town where the dead have mummified in the ground rather than rotted away. 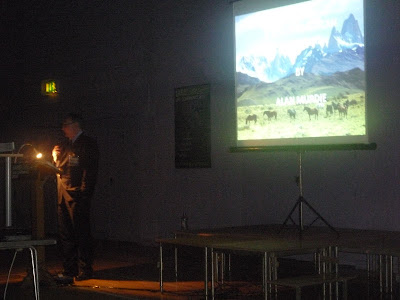 By this time of day the venue had really started to heat up, and unfortunately there were no ceiling fans. To our relief someone decided to open a door to let in some air. After Alan’s talk there was a short break, during which I took to the mic to announce BUFOG Contactee Support, the monthly online contactee meeting I will be hosting from now on through the website.

It was then time for the final speaker of the day, the one, the only, Larry Warren. Larry gave a superb talk about many aspects of the Rendlesham incident and the part that he played in it. Rather than concentrate on the actual details of what took place, he focused more on how it had affected both his life and the lives of the other witnesses. He showed many documents to back up his statements, and it was a very heartfelt talk. He also spoke of the new Facebook group set up by John Burroughs. The purpose of the group is to draw attention to the Rendlesham incident, which will hopefully lead to disclosure about what took place. 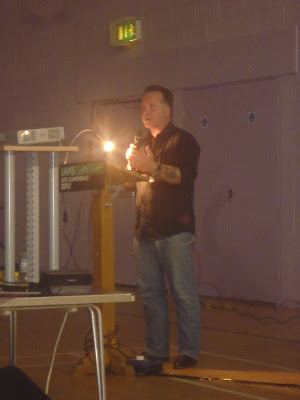 Towards the end of his lecture he invited Sacha to give her thoughts on the Rendlesham incident. She pointed out a number of official statements which did not add up and could be used as evidence that a cover up about the incident had taken place. 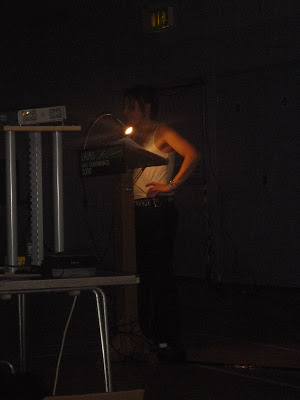 I ended the conference chatting with Paul Vella about bigfoot sightings, and two contactees who were interested in joining in with the contactee support meetings. I also managed to sneak a shot of the LAPIS crew who were gathered for an official photograph. 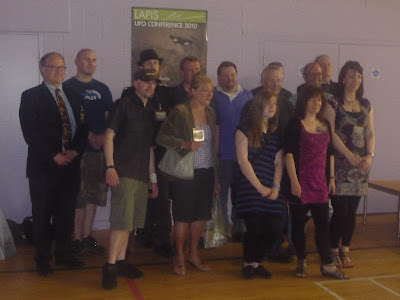 After saying goodbye to the speakers and our new found friends, we headed down to the seafront for a few minutes to check out the beach in the evening sun and eat some fish and chips by the pier, before beginning our journey back to Brum. It had been an excellent and informative day, and I will surely be returning next year.