When I travel by plane, I sometimes wonder what it would be like to actually see a UFO out of the window during the flight. This may sound unlikely, but considering the high level of visibility and amount of sky covered, there is possibly a greater chance of seeing one than at other times. In June 2005 this possibility became a reality for Paul Merton.

As the incident happened a number of years ago, Paul does not remember the exact day in June 2005 that it took place. However he does remember that it was a clear and sunny day. The weather in the UK did not really matter, as he was about to embark on a holiday to Kos in Greece with his wife. Their flight was departing from Birmingham International Airport at 2pm. He had a window seat on the right side of the airliner, a few rows back behind the wing, with his wife in the seat next to him.

The couple sat back in their seats and prepared for take off. The plane began its flight on time. Two minutes after take off while still climbing, Paul decided to have a look at the view out of the window. As he looked down and behind the plane, a strange object caught his attention. He was amazed to see what looked like a shiny silver boomerang-shaped craft. He estimated that the plane he was in was about 3000 feet high, and that the UFO was flying about 1000 feet off the ground. It had smooth rounded edges with no sharp corners, and did not have any visible lights or protrusions. It was highly reflective and brightly reflecting the afternoon sun. Its width from end to end looked about twice the length of a double decker bus.

Aerial map of Birmingham International Airport. The UFO was located a short distance from here, probably to the South East: 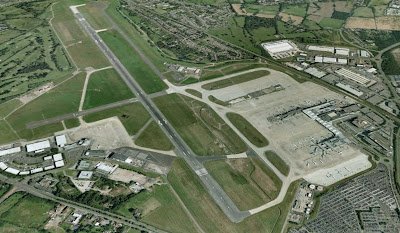 The craft appeared to be flying at quite a fast speed as it appeared to be keeping up with the plane, possibly moving faster. After a couple of seconds it banked to the left for a few seconds, then abruptly curved round back to the right and returned to where it had been. It continued these zig-zagging manoeuvres for the remainder of the sighting, while still moving forward at a diagonal away from the direction of the plane. It looked like it was searching the ground for something.

Witness drawing of the view of the UFO from the plane window and its movement pattern: 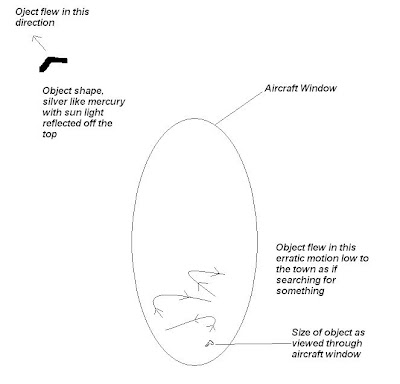 After curiously watching the craft for about a minute, Paul decided to tell his wife about it. He continued to watch, and his wife craned her head over to attempt to also see it. However the UFO was quite low down and she found this difficult. About 20 seconds later before she managed to spot it, the UFO was obscured from view by the edge of the window.

Nobody else on the plane appeared to have noticed the UFO, and Paul did not tell anyone about it. He felt sure it was a metallic craft of some kind due to the controlled movements he had seen it perform. He entertains the possibility that it was military in origin, however says that it was flying very fast, and that no normal aircraft would have been able to perform such abrupt manoeuvres.

This is very interesting sighting, all the more impressive that it occurred in broad daylight close to a busy airport. Due to the high level of visibility it was clear that it was a solid object of some kind. It appeared too large to be an inflatable, kite or radio controlled model - these would have been nothing more than a dot when viewed from 3000 feet. The manoeuvres that it was performing certainly suggest that it was under intelligent control. If it was some kind of experimental military aircraft, it is very unlikely that they would fly it above such a populated area at relatively low altitude.

It seems improbable that Paul would have mistaken a normal aircraft for something more unusual. There are some aircraft which can appear to be boomerang shaped from certain angles, however the object had no markings, tail or visible means of propulsion. And a normal aircraft would have been flying on a straight course not banking left and right continuously. It could not have been a handglider or glider due to the speed it was moving at and abruptness of its movements.

Most alternative explanations can be disregarded for one reason or another, so it appears that Paul’s sighting was of an advanced craft of some kind, possibly of extraterrestrial origin.