This report covers a fascinating multiple witness sighting of a spherical UFO that was seen in near the town of Blackmill, Bridgend, South Wales in the summer of 1991. Both the appearance and movement of the object are very impressive indeed.

It was 6.30pm on an evening in June 1991. It was a warm and clear evening and due to the time of year was still light in the sky. John, his wife and two friends were out driving on their way to a local Indian restaurant near to Blackmill. They were driving along the A4903 and heading down a shallow hill. In front of them to the South East was a farmer’s field.

Photograph of the sighting location in the direction the car was driving in: 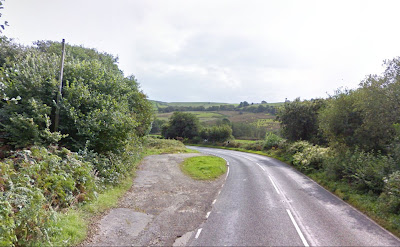 Suddenly they became aware of a very bright glowing object over the field, about 200 metres away from their position. It appeared to be about 150-200 feet in the air. It was clearly down quite low as the field could be seen sloping up behind it. It looked like an extremely bright shimmering silver sphere. John compares the light to that from an arc welding torch. The object appeared to be quite small in size. John exclaimed “Fucking hell, what is that?!” which drew everyone else’s attention to it. 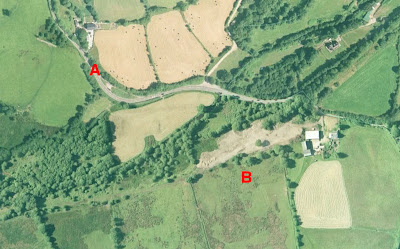 The sphere was stationary over the field but appeared to be wobbling back and forth. It looked like a floating ball of mercury. All the witnesses watched the object for about 20 seconds as they drove down the hill towards it. Then suddenly without warning it shot away in a South Westerly direction extremely fast. It was gone from the area in just a second. The acceleration was breathtaking and far in advance of any known aircraft.

The witnesses could barely believe what they had all just seen. They arrived at the restaurant but were quiet for the rest of the evening, they were all in a state of shock. They have never spoken about the experience since. John says that before the incident he never believed in UFOs but could not dismiss what he had seen that evening, and remembers it very clearly to this day.

This is a truly stunning sighting and one which is hard to dismiss or explain using mundane explanations. Due to the fact that the object was initially stationary and then suddenly accelerated and shot away at hundreds of miles an hour, it cannot have been anything man-made such as a helicopter, hot air balloon, Chinese lantern or lit inflatable. It could not have been a distant aircraft such as a military jet approaching and then turning and flying away, as it was definitely down over the field, the hill was visible behind it. Also the shape of the jet would have been seen when it flew away to the South even if it could have been initially obscured by the light.

I am convinced that this object was a genuine advanced craft, probably of extraterrestrial origin. The manoeuvring capabilities exhibited were far in advance of anything currently owned by the military, yet have been seen many times before in other UFO incidents, including some I have personally investigated.

The object appeared to be spherical in shape and was either emitting its own light, or had very bright lights on it. The fact it was wobbling as it hovered is extremely interesting, and is again something which has been reported many times before. It has been theorised that this wobbling motion often seen may well be due to the anti gravity energy field surrounding it, and that the object itself is not wobbling but looks like it from the outside, similar to a mirage.

The reaction of the witnesses to seeing the UFO is unsurprising. They had all just seen something which they could not rationally explain, which left them all in a deep sense of shock. After such an experience many choose to ignore it and try to pretend it did not happen, as it is so outside the realms of normality for them. It is great that John chose to look more into what the object could have been. If he had not done this then it is unlikely we would have ever found out about this stunning incident.