Most sightings received by Birmingham UFO Group are merely of distant objects or lights in the sky. This is not really surprising as UFOs rarely appear in close proximity to people, they are essentially covert in operation. However occasionally a sighting takes place where a UFO is clearly seen and where an advanced craft is the most likely explanation. This is one such sighting, which took place in Abergavenny, Wales in the early 1980s.

The witness Paul Griffiths, cannot remember the exact date of the incident but believes it to be either July or August of 1983 or 84. At the time Paul was living with his parents in a house on St Marys Road. He awoke about 6.30am to use the bathroom. He came back through to his bedroom and sat down on the edge of his bed and looked out of the window. It was a bright and clear morning and the sun had come up. The view from his window overlooked some nearby housing, beyond which was the nearby Bailey Park to the West.

Old photograph taken by the witness showing the view out of the window: 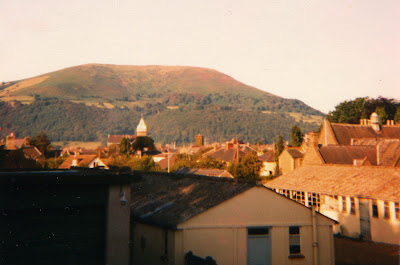 Suddenly he noticed something enter the right of his line of sight. There was a strange looking object which appeared to be over some trees in Bailey Park, about 200 yards from his location. At first he thought it was a conventional aircraft of some kind, but very shortly realised it was something else entirely. His glace quickly turned into a wide eyed stare!

There in the sky over the park was what looked like a dark metallic grey coloured saucer-shaped craft. The craft was divided into a shallow base section and a deeper upper section. At the division was a narrow flat band. This band had black rectangular slats in it. The band appeared to be rotating around the object in an anti-clockwise direction. There were no other markings or lights on the craft. Paul estimates the craft was about the size of a large saloon car. It appeared to be just above the height of the trees, about 40 feet high.

Witness drawing of the UFO with notes: 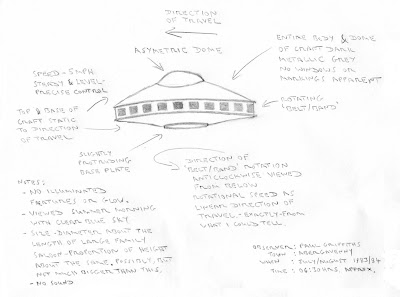 Photograph of the main entrance to Bailey Park. The UFO was first seen hovering over the trees in this photo: 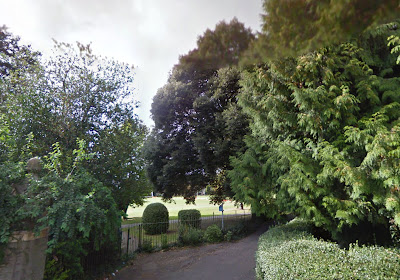 The UFO was moving in a South Easterly direction at a slow speed, about 5 mph. This movement was constant and it remained at a level altitude. The central band was rotating at the same speed the craft was moving at, and Paul wondered if this was something to do with its propulsion. He was amazed at what he was witnessing. He jumped up off the bed so he was right next to the window, but did not open it. He thought about taking a photograph but realised there was no film in his camera. At the time Paul was quite into photography, but did not keep exposed film in the camera for extended periods as he was aware it could be damaged. He tried calling his parents to come and see also, but they did not wake up. Paul watched the craft for about 20-30 seconds until it disappeared to the left of his vision behind some trees.

Aerial map showing the route of the UFO and location of the witness: 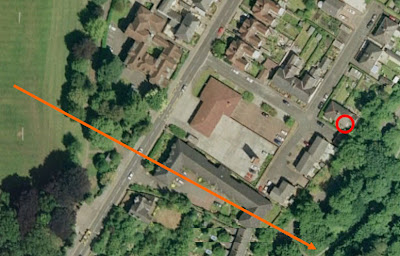 After the sighting he felt privileged to have seen what he did, and believed that it was a genuine alien craft. Over the next few days he checked the TV and newspapers for any reports of the UFO from other people but he did not see anything. He feels that even though it took place quite early in the morning, there must have been other witnesses due to the object.

In 2007, Paul decided to post his sighting on the MUFON website. He received an E-Mail back expressing interest in his sighting and in meeting up with him, but after this nothing else became of it.

This is a very impressive sighting due to the appearance of the object and the clarity of the sighting. The object was a “classic” flying saucer shape. It was obviously not a conventional aircraft or helicopter of any kind. There is a possibility that it was a remote controlled model someone had made which was being flown over the park, but this seems unlikely. The object seemed too large to be a model, and even if it was, why would its owner have been flying it so early in the morning? This particular explanation does not make sense to me, and I feel it can be disregarded.

It is unlikely the object was an inflatable of some kind because of the rotating band around the centre, general structured appearance and the fact it was flying on a level course. It certainly appeared like it was under power, and even though it did not perform any obviously intelligent manoeuvres, it did not look like it was merely drifting in an air current.

Could it have been a secret advanced military craft. As no extraterrestrial beings were seen this cannot be completely ruled out, however if it was I find it very unlikely the military would fly it at low altitude over a populated area in plain sight. This would be completely illogical, so again this explanation I feel can be disregarded.

I feel that after looking at all the possibilities, the most likely explanation is that the object was exactly what the witness assumed it was – an advanced craft of extraterrestrial origin. What it was doing in the skies over Abergavenny that morning we will probably never know. It seems likely there may have been other witnesses. If you are reading this report and feel you too saw this UFO, please get in touch.