This report covers a sighting of a black triangular shaped UFO with an interesting lighting configuration, which was seen by a man in Rawmarsh, Rotherham in July 2010. It is a great example of how unexplained craft can be seen anywhere, at any time.

The witness, Shaun, was sitting in the living room of his second storey flat on Dawson Avenue and watching TV. It was about 10pm in the evening. Suddenly he noticed some huge yellow lights up in the sky visible from the window of the room. Shaun jumped to his feet to see where the lights were coming from. It was a clear night and the stars were visible. Towards the South he could see seven large round yellow lights in a crown-like pattern, three above with four below them. They appeared to be attached to the side/rear of a very large object. Shaun estimates it was about the size of a football pitch. As it was dark it was hard to initially make out the shape of the object, all he could see clearly were the yellow lights. It appeared to be between 150-200 feet in the air.

Aerial map showing the approximate location of the sighting: 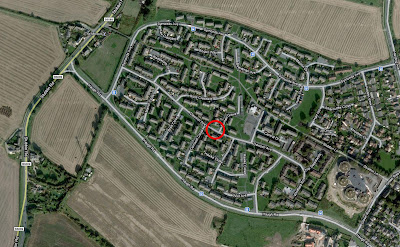 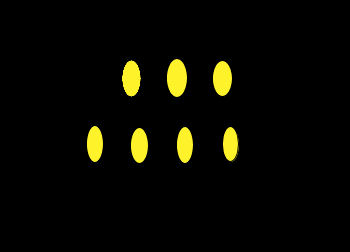 The UFO was moving across the sky horizontally on a level course about a mile away from him. Shaun estimates it was moving between 100-200 mph. After it had flown several hundred feet across the sky, it started to turn until it was heading towards his location. Shaun quickly ran to get his mobile phone as he wanted to get a photograph of what he was witnessing. He returned to the window and found that the object was still on approach. As it did so, he began to see more of the underside of the craft and the yellow lights became obscured from view. It was now that he realised that the object was a large triangular-shaped craft. The main body of the craft was completely black, he could see no markings on it. On the underside he saw a number of white lights around the edges and a red light in the centre. He was amazed at what he was witnessing. 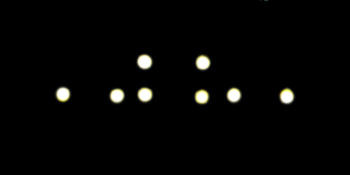 As it passed overhead he leaned out of the flat window to take a photograph on his phone's camera. Unfortunately because it was dark and the main body of the craft appeared black it did not show up very clearly, all he managed to catch was one of the lights underneath. The craft moved out of sight over the roof of the flat. Shaun ran through to the dining room on the opposite side, and stared out of the window expecting to see the craft reappear. If it had continued on the same course it should have been visible but it was gone, it was almost like it had vanished or left the area while over the roof of the flat.

Shaun felt that what he had seen was an extraterrestrial craft, although he says it could possibly have been military in origin. After the sighting he told his mum about what he had seen, and she believed him.

This is a very interesting sighting, and likely to be a genuine sighting of a "Flying Triangle" craft. Craft of this type have been seen all around the world, especially over rece