Paul (name changed for privacy reasons) has worked for the last 30 years as a satellite engineer and medical technical device designer. In June 1997 when he was 33 years old, he worked at Prescott Valley for 8 weeks. Prescott Valley is roughly 80 miles North of Phoenix, Arizona. He was working on a micro machining centre for a medical device. He is a rational, level headed and intelligent engineer. While working at Prescott Valley he had a strange experience involving mysterious glowing lights and missing time. He also suffers ongoing complications possibly linked to the incident. This report will cover what took place in detail.

During his time at Prescott Valley, Paul spent a day on the Yavapai Indian reservation, socialising with them and drinking liquor they make from cactus. He spent the night with the tribe and they stayed up late talking. The elders of the tribe talked about seeing “sky spirits” in the area. However the younger men of the tribe believed that these were actually muilitary helicopters using white sound speakers to cancel out the sound of the rotor blades. This made sense to Paul as he knew that the USA was testing this technology.

It was the last weekend before Paul was due to return home to the UK, and he had a day to relax. He decided to go for a drive to Sedona. It was a very hot day, so hot that when he stopped at a shop and left a drink in the car, when he returned to the car the drink had completely evaporated! Dehydration and sunstroke is a major concern in such conditions. Paul drove on from Sedona to Williams. He then realised that he had misjudged how far he had driven, and that it would take a long time to get back to his motel in Prescott.

So he began his return journey immediately, which took him North East along Route 89 across the Prescott desert. It was getting dark and he was about 20 miles from the motel. The sky was completely clear, providing a stunning view of the stars above. The area was flat and desolate, with small bushes either side of the road. There was nobody else on the road. 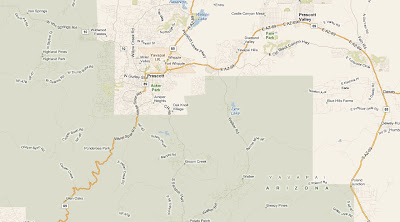 Paul suddenly noticed three extremely bright electric blue lights in the sky. The lights were stopping and starting moving individually from one another, moving up and down and around in curves. They were on the horizon about 2 miles away from his position, to the right of the road over some small mountains.

Daylight photograph of Route 89, showing the low mountains in the distance, over which Paul saw the lights: 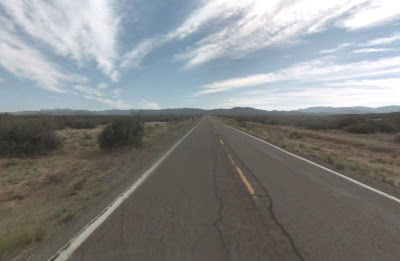 At first he thought they might be aircraft, but if so other lights would also be visible. So he assumed that they must be the helicopters that the Indians had talked about a fortnight before. He was not certain that helicopters had solitary blue lights on them either, but this seemed like the best explanation at the time. They appeared to be flying in formation. Then one of them suddenly moved down in an arc, while another dropped down before moving back up. These movements were sudden and rapid, and Paul did feel it was strange that helicopters would act like this.

Paul is interested in aviation, so decided to pull over to see how well the white noise would cancel out their sound. This is the last thing that he remembers doing. He does not remember actually stopping the car, the rest of the return journey or arriving back at the motel. The next thing he knew he was waking up in his room, lying fully clothed on his bed. He felt a bit dazed and wondered what had taken place. After getting up and going to have a shower, Paul noticed some things that seemed at odds with normality. Every night he would fill up an ice bucket and put in some Mountain Dew and water in case he awoke in the night and was thirsty. But looking at the bucket he found it was empty. Also he would always park his car outside his motel room, but when he checked outside he found that it was parked round the back of the motel instead. This was very strange and he wondered why he would have done this.

Later on at work, Paul told his work mates what had taken place. They came up with a straightforward explanation. They agreed there had been a number of strange lights in the area and put them down to helicopters, just as Paul had. They suggested that Paul's memory loss was the result of dehydration. When he drove back to the motel, someone else was in his space so he parked the car around the back instead. When he got back to his room he was so dehydrated he simply passed out on the bed before filling the ice bucket or undressing.

At the time Paul thought that this was a logical enough explanation for what had taken place. He was aware that memory loss can occur with dehydration, and so thought nothing more about the incident.

When Paul was back in the UK, he started to get a strange feeling in the bridge of his nose between his eyes. This feeling would occur whenever he was near high electrical fields or when he held his mobile phone close to his head. It felt like a light pressure rather than actual pain, similar to the feeling you get after having a nose bleed.

He still gets this feeling today when in close proximity to electrical devices or magnets. He sometimes needs to work near to MRI scanners, and feels it then. He has never been to a doctor about the complaint. He is not sure of the reason for it, but never experienced it prior to the incident at Prescott Valley.

When he returned from Prescott Valley, his friends told him that his character had changed. They said that he seemed more remote, like he was observing rather than taking part. Paul was not really aware of this change at the time. Looking back, Paul feels he was able to understand what people were talking about very quickly and easily, although he admits this could be just down to experience.

The UFO sighting that Paul had, and the subsequent unusual things which took place are very interesting. The lights themselves could potentially have been helicopters, but Paul did mention that their movement seemed strange and rapid. I also find it odd that they would just have blue lights on them; usually other colours such as white/red would also be seen. But they were seen at a distance, so maybe their lights were merging into one. If something like this were sighted over a town, it could be put down to blue LED balloons that had been launched that were caught in unusual air currents. However this seems very unlikely out in the desert, so I do not believe this is an adequate explanation.

The memory loss aspect of the incident is also intriguing. Again it may have been dehydration, but if so surely he would have been feeling its effects long before he saw the lights? Paul says his memories up to deciding to pull up were clear, but afterwards there was nothing. I find it hard to believe his memory would have switched off completely from one moment to the next if caused by dehydration. It is interesting that his last memory was of looking at some unidentified lighs in the sky. However it certainly appears that he did drive the rest of the way to the motel without remembering.

It is of course unknown if the feeling he gets in the bridge of his nose is related to what happened, but is certainly a possibility. The position of the feeling is interesting, as in contact cases implants are often reported to have been placed or found here. Could the feeling he gets near to electrical or magnetic fields be caused by an implant reacting to those fields? There is no other evidence pointing towards interaction of any kind with the lights so this is only a suggestion, but is still worth considering. If Paul does have an implant, an X-Ray might reveal this, but at present he has no plans to go for one.

While all the aspects of the incident potentially have normal explanations, the fact that they all occurred after one another makes it very mysterious. Paul is considering the possibility of being regressed to see if he can remember any further details of what took place that night. I will update this report with any further developments.