Occasionally at BUFOG we receive details of things that don’t really involve sightings of actual aerial objects, but are just as mysterious. This report covers details of an unexplained yellow coloured beam of light that crossed the sky one early morning in 1987.

Back in 1987 Ruggerio (name changed for privacy reasons) worked as a post man in the area of Rowley Regis. One morning in either January or February he was on his way to work at 4.45am. He was on his bicycle so was pleased that it was a pleasant clear morning. He rode past the Rowley Regis railway station and began cycling down Avenue Road. He happened looked up into the star-filled sky to try and locate the stars that make up Orion. Suddenly without warning a beam of sharply defined yellow light appeared in the sky. It covered his entire view of the sky and went across the road at a diagonal angle. The beam appeared to be at a height of about 200-300 yards and was completely parallel to the ground. It was not pencil thin like a laser, nor was it large in diameter like the beam of a search light. Ruggerio estimates it was about 1/3 the diameter of a search light beam but this is hard to judge.

Aerial map of the incident location, with the beam drawn on top: 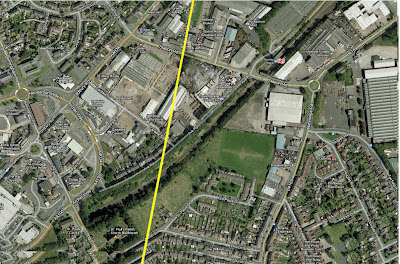 After cycling past the junction of Cardale Street, he stopped at the edge of the road and continued to stare up at the beam. He blinked his eyes several times just to make sure it was actually present. Looking to his right he notice that the beam seemed to terminate in a blip of light to the North, although this could have been an optical illusion. There was no sound whatsoever and the beam did not move at all.

Photograph of Avenue Road in the location where the witness stopped: 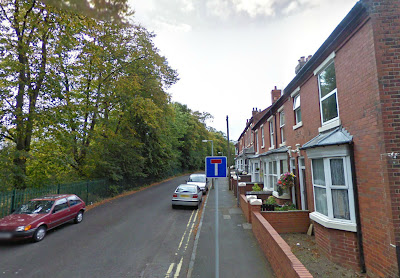 After about 15 seconds, Ruggerio had the spontaneous thought that the beam was about to vanish. At that precice moment it did! It was almost as if he had been made aware of its departure. There was nothing else he could do other than continue his route to work.  When he got there he did tell one of the other postmen, but he was never asked about it again.

This is an absolutely bizarre experience and one which is very hard to explain. There are only a few possible mun