This report covers two incidents. The first of these occurred in 2002 and involved an abduction-themed dream which was shared by two separate individuals. Then in 2007 one of these individuals had a stunning close encounter with a UFO. The UFO sighting will be covered first.

Back in 2002 Kay she had a very peculiar dream. In this dream she was standing in a kitchen with a black and white chequered floor. She was with a female work colleague. They both went out into the back garden, which was quite small in size. Off to her right Kay noticed a craft hovering in the sky. There was light emitting down from the base of the craft. Her work colleague stepped towards this light, saying she was going to go into the craft. Kay was frightened and ran back into the house.

The next thing she became aware of she appeared to be on board the craft. She was staring out of a large curved window. She sensed a figure standing behind her but did not turn round to look at it. It began telling her all about the universe and how they formed the planets. She did not feel frightened during this experience, nor did she see her work colleague there. This was all the detail she could recount from the dream.

The following day she was on an early shift. The colleague from her dream was there. Jokingly she mentioned to her that she had a dream about her. Unexpectedly, her work colleague laughed and said “I know, I was dreaming about you!” Kay mentioned that they had been standing in a kitchen with a chequered floor, and had then gone outside into the back garden. Her work colleague then continued, saying that there had been a UFO and that she had entered it but Kay did not. Both Kay and her work colleague were very surprised by the fact they had seemingly had the same dream. However it was a busy day, and it was not discussed again.

This is quite an intriguing mystery. Could it really have just been coincidence that Kay and her friend had a near identical dream? Some of the details of the dream seem too specific for this. But what other explanation could there be? Perhaps something unusual such as a psychic link between them somehow caused them to experience the same dream.

However another possibility which cannot be entirely ruled out is that the dream actually occurred. The main issue with this prospect is that the surroundings were not familiar to either Kay or her friend. They were together in a completely unknown location. If an abduction really took place surely it would have occurred in a recognisable location such as Kay or her friend’s house? However sometimes in contact experiences the beings can mask the surroundings portraying a false image commonly known as a screen memory. Could Kay and her work colleague have actually been abducted? An incident which afterwards felt like nothing more than an unusual dream?

In mid-2013 Kay decided to get back in touch with her work colleague to discuss the dream. Despite the fact they had not spoken for many years, her friend recollected the incident. She told Kay that her memory was vague but that she went into a shaft of light into the UFO but Kay didn't. She remembers them showing her  "the beginning of life". When she mentioned this to Kay, she got even more excited about what took place. Kay says that she has had this on her mind for years, and to have this confirmed by her friend was amazing.

Kay is planning to meet up again with her friend next month to again chat about what happened. If any further revelations are discovered they will be added to this report in due course.

Late evening on the 13th September 2007 Kay was driving home from work travelling towards Hinkley. It was around 10.17 pm and already fully dark. There were very few other cars around. She drove along Sapcote Road, passing a small shop on her left.

As she reached the turning onto Burbage Road she suddenly noticed a very unusual object in the sky. It was off to her left and appeared to be hovering just above the trees on the far side of the road. It was huge and at an angle. She could make out the left side, back end and tapering of the front end. It appeared to be the size of a large aircraft. The object was a strange shape. It appeared rounded at the front but had curved wings towards the back. There were no markings or windows as far as she could tell. It looked dark grey metallic in colour, although this could have been partially due to the darkness. The object had a number of coloured lights along its underside. Kay cannot remember the exact shades of these lights; she just observed the entire object.

Aerial map of the sighting location with position of witness (A) and estimated position of UFO (B): 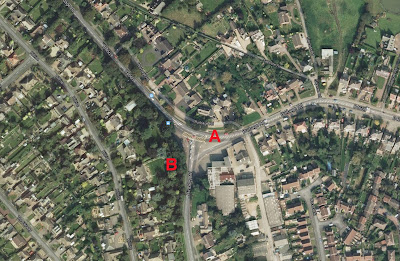 Photograph of the sighting location in the direction the UFO was seen: 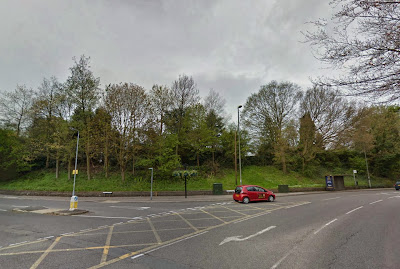 Witness drawing showing the UFO, her car and the local road layout: 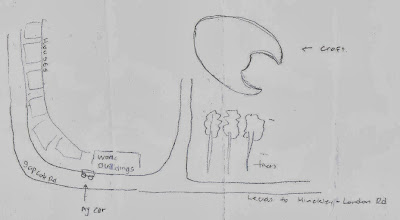 As soon as it came into view Kay pulled over at the side of the road. She was absolutely mesmerised by the object. There was another car a short distance ahead of her on the road. This carried on driving as if there was nothing there. It is likely that the driver did not look up into the sky. Kay had a camera phone on her, but as with many other sightings, did not think to get it and take a photograph, she was too pre-occupied staring at the UFO. There did not appear to be any interference in the air. To her knowledge the object was completely silent, although she did have the windows up at the time.

UFO shape chart made up of different reported sightings. Kay says that the one marked L2 is the best representation of what the UFO looked like: 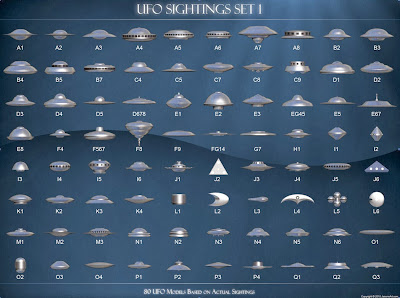 Both astounded and puzzled by what she was looking at, Kay continued to watch the object hovering motionless over the trees. After what seemed like several minutes the object began to move. It passed across Hinkley Road to her left and then continued to veer off to the right over the houses. She watched it as far as she could but it was not moving in a direction where she could easily follow it on the road so she did not give chase. If it had carried on going in the same direction it was heading it would have passed over the M69 motorway to the South East, although Kay cannot confirm whether this did actually take place.

Aerial map showing the sighting location (A) and the M69 motorway (B) where the UFO was thought to fly towards: 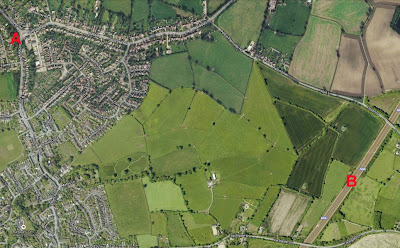 Kay continued her journey home, thinking about what she had just witnessed. She informed both of her sons about what she had seen. Her elder son was sceptical and laughed at her, but her younger son seemed more interested and started asking questions. She wrote down what she had seen so that she would not forget the details. Later on she searched online to see if anyone else had reported seeing it but nobody had posted anything. She added the sighting to a UFO website but nobody commented further.

Kay’s sighting is impressive and there are numerous aspects which do not fit with a mundane explanation. Due to the fact that the object hovered completely still for several minutes it could not have been a normal aeroplane. It was clearly not a helicopter, neither its shape or its lighting configuration fit this explanation. Due to the unusual shape of the object, lighting and movement pattern observed it is very unlikely to have been a large drifting inflatable or hot air balloon. It was clearly much too large to be a radio controlled model.

It certainly appears that the object was a controlled craft of some kind. While it is impossible to say for certain that it was extra-terrestrial in origin, it was very unlikely to be a secret military aircraft. You would have to first ask why the military would build a craft of this appearance in the first place. And for what reason would they then fly it over a populated area in full sight of everyone? Although the UFO did not perform any particularly impressive manoeuvres there is still a good chance that it was a genuine sighting and was not man-made.