Late evening in the winter of 1977 a couple had a very unusual experience while out in their car. This experience involved the apparent temporary shut-down of an entire motorway of traffic, and a period of missing time. Although they do not recall seeing any craft or beings, there is the possibility that the witnesses or someone else in the area were abducted. In May 2011 the couple attended a lecture by Richard Hall, and he advised that they get in touch with me to recount what took place.

On the night of the incident, Vic and his wife Val had been round his sister’s house on Wilderness Lane, Great Barr, Birmingham. They left the house between 10-10.30pm. It was a cold night but there was a clear sky above. Further along the road about five minutes later they were approaching an overpass of the M6 motorway . The overpass was about 300 yards ahead of them, and the lights from passing traffic could be seen.

Aerial map showing Wilderness Lane with the M6 overpass and the approximate location of the witnesses marked: 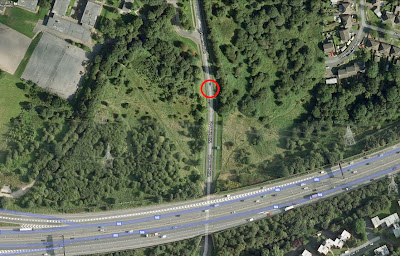 Photograph of the incident location showing the M6 overpass in the distance: 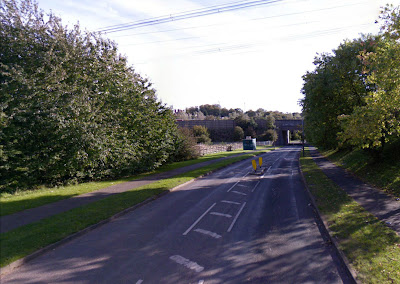 Suddenly a very bright white light lit up the whole area around them brighter than daylight. This light seemed to be coming from beyond the overpass. They could no longer see any moving lights on the overpass, it felt almost like they had been frozen in time. However their car still worked fine and they could still move freely.

Vic pulled the car over at the side of the road. Everything was extremely quiet and still. Vic was unsure of what was taking place but remained calm. However Val was very upset with the situation. Everything seemed to remain still for what seemed like 10 minutes. A fox then walked across the road in front of their stopped car, seemingly unaffected by what was taking place. A moment later the light suddenly went away and they could once again see moving traffic on the overpass.

The couple were very confused by what had just happened. They returned to Vic's sister’s house to see if they had experienced anything similar. When they knocked on the door they found out an hour had gone by and Vic's sister had actually got up out of bed to let them in. The location where the event happened was only 5 minutes drive from the house, and it had seemed like the light had been present for about 10 minutes, so there was up to 40 minutes which they could not account for.

The incident has puzzled both the witnesses ever since, and they hope to find out what really took place on that night.

Although the couple did not see an actual craft or ET beings at any point, at least to their current knowledge, I feel that they may have been abducted. The ETs often shut down the surrounding area when they take individuals. This is probably done to prevent others from seeing them or interfering with what they are doing. The bright white light which the couple saw could well have come from a craft in their proximity, which temporarily stopped time in order to abduct them. The fact that both witnesses experienced the same thing means it is very unlikely to have been down to a medical reason or hallucination.

It is interesting to note that although the area ahead of them appeared to be frozen, the witnesses themselves could still move freely and their car still worked. This suggests a completely different possibility – that someone else nearby was abducted and the witnesses were caught up in some kind of time distortion which affected the local area. However it seems unlikely that all vehicles in the area would have been switched off. Also the incident seemed to go on for 10 minutes, surely in this time other vehicles would have arrived at the location from further back on the motorway. Looking at this situation logically, if these vehicles too were shut down all at the same place this would surely have caused a pile up? And this explanation does not take into account the missing time aspect of the case.

The fact that the incident seemed to go on for about 10 minutes but in actual fact about 50 minutes had gone by suggests that the couple were abducted from their vehicle and had the memories of this experience blocked out. If this is really what happened, then perhaps just the witnesses and their vehicle were inside the area of time distortion. This would have made it seem that everything else around them had stopped. Perhaps they were conscious for the first 10 minutes of this experience but after this were taken. This seems to me the most probable explanation for what was experienced.

It is possible that hypnotic regression may be able to unlock the memories of what took place during the missing period of time. I have recommended this as a way forward. It would be fascinating to regress both Vic and Val and see if they come out with matching stories. This may be arranged in the near future. If it is then the findings will be added to this report.