In the 1990s, Tracey Grant-Mcrobie, her ex-husband Darren and daughter Georgina experienced an impressive amount of unusual incidents, some of which suggest that they may be abductees. In 1997 they contacted renowned UFO investigator Tony Dodd, now sadly deceased. As Tony has already done a superb job of investigating and documenting the incidents which occurred back then, they will only be briefly covered in this report. Full descriptions of the events that took place can be found in Tony Dodd’s excellent book Alien Investigator (page 121 onwards).

The incidents experienced by the family included objects moving on their own, doors being wrenched open, sightings of beings in the couple’s bedroom, unexplained voices, and strange smells. The couple assumed that perhaps the house was haunted, but when they moved to a new house in the Yorkshire Dales, the unexplained incidents continued. They had numerous stunning UFO sightings, one of which they managed to film on camcorder. Shortly afterwards they contacted Tony Dodd’s UFO hotline and Manchester airport. Within 24 hours their house was broken into and the tape was stolen.

Many of the things experienced by the family suggested they may have been abducted on numerous occasions - including physical disappearances and reappearances, missing time incidents, vanishing items of clothing, night-time paralysis, body markings, spontaneous healing of an injury to Tracey's chest caused by an operation, and white light which engulfed their cottage. Also their children were visited numerous times by non-human entities. After investigating all these incidents in detail, Tony was convinced that they were being abducted on a regular basis. I too share this belief after reading about the case in detail.

In October 2009 Tracey got in contact with BUFOG and informed me that she and her family still experience regular ongoing paranormal activity, both at their current house in Perth, Scotland, and previous house in Leeds. At the previous address this activity was occurring on a constant, near daily basis. Since moving to their new property, the activity appears to have died down but still takes place.

Photograph of the family’s current home: 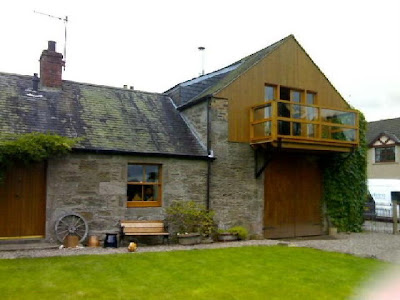 It is unknown if this ongoing activity is in some way related to their UFO/contact experiences, many would attribute them to other phenomena such as ghosts and the sixth sense. Many of the things Tracey has reported have been described before by contactees, and could therefore be directly or indirectly related.

Tracey certainly believes that at least some of the activity is due to a haunting. Back in February 2000 she fell out with her father, and she or the kids never saw him again from that day up until the day he died in January 2009. A month before he died there was a lot of strange activity in the house, some of which, as you will see, Tracey can relate directly to her father. This activity still occurs, and Tracey believes her father may be haunting the family.

I have been contacted by Tracey’s good friend Debbie, who verified many of the things discussed in the report.

This report will cover the activity being experienced by the family, and as long as they continue to contact me will be regularly updated whenever new incidents take place.

For most of her life Tracey has had heightened psychic abilities, including the ability to predict events before they take place, and sense things about people or places that most would not. Her earliest memory of receiving a premonition was when she was 3 or 4 years old. At this time of her life she suffered from terrible headaches. Tracey does not believe this is coincidence and feels that these were in some way related to the awakening of her abilities.

Tracey’s premonitions occur randomly at both day and night, and take place quite regularly. They manifest as sudden clear thoughts which pop into her head, and feel completely different from a dream. She has no power over what she predicts, and can be about anyone, not just her own family. If she gets a premonition at night-time it will keep her awake, and she will toss and turn till morning. She does not write down her predictions as she does not feel the need to and always remembers them. Tracey has attempted to induce a premonition by thinking of an outcome, which apparently proved successful. She says that her predictions are rarely wrong, but it is harder if she is tired or stressed.

A recent example took place on the night of Wednesday 4th November 2009. Tracey kept waking up at various points, this regularly occurs when she has predicted something. She knew that her partner Adrian was going to get sacked from his job. Adrian is a hard worker and everyone liked him at the company so she had no reason to think this, but knew that it was going to come true. On Thursday morning she decided to text Adrian to warn him that when he got back to the yard he would be sacked. He replied to her "Cheers sweetheart!" but was fully aware that she would not be wrong. When Tracey met Adrian five years ago he was already open to the possibility of psychic powers being real, and everything he has seen since being with her has made him a firm believer. Sure enough when he got into work he was given the sack for being late twice through no fault of his own.

Tracey says she has had many premonitions, and has predicted many things to do with her own life, her family and friends. Sometimes they even appear to be about people she has not met and she “sees” places she has never visited before. It is unknown what relevance, if any, that these particular premonitions have, perhaps they are just completely random, or perhaps they are of things that will be relevant in the future. <