I find it fascinating when people send in UFO sighting details to the group. But it’s even better when they have some actual proof of their encounter, and can add a lot of weight to their story. In this particular case, a UFO was both witnessed and photographed by Gary, his wife Deborah and two children (Names changed for privacy reasons). Both the appearance and the movement patterns displayed by the object were very interesting.

The incident took place back in December 2008 and at the time they did not decide to report what they had seen. However in late November 2009, Gary and Deborah randomly began discussing the sighting again and thought they would send it to some UFO groups as they would be interested to see it. BUFOG was one of the groups who received the photograph with a brief description of what happened, and I soon got in contact with Gary for further details on the incident.

The family involved in this case live close to East Beach in Shoeburyness, Southend, Essex. Their sighting occurred in the second week of December 2008. It was a day of mixed weather, with both sunlight and showers. It was 10am and the family were out for a drive. It had recently ceased raining. Looking to the North West they suddenly noticed that a rainbow had appeared in the sky. It was in the direction of East Beach so Gary suggested they drove over there to get a better look at it. 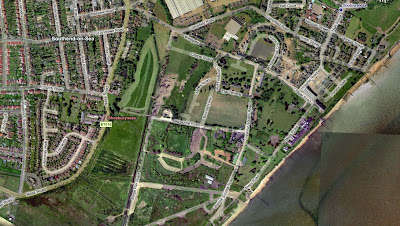 About five minutes later they arrived at East Beach, and parked the car close to the water’s edge. The beach was quiet due to the rainy weather. Over the water on a clear day it is possible to see across to Kent without having to get out of the car. The family looked out of the car windscreen at the rainbow. Almost immediately they noticed a stationary object in the sky. It appeared to be metallic and was reflecting the sunlight. The object was smooth-surfaced with curved edges and did not appear to have any protrusions or obvious means of propulsion. Gary estimates it was about ¼ of a mile out to sea, and possibly a few hundred feet high. In his opinion it was large in size, possibly twice as wide as a long wheel transit van.

All the family were puzzled by the object. Gary decided he would get out of the car and take a photograph of it almost immediately. There was a slight breeze coming in from the sea, a mild temperature (about 7/8 degrees C) and it was very sunny with partial cloud cover. It had been raining about 10 minutes previous. The object was hovering over the sea and was completely silent. Gary aimed his camera to the North West and took one photograph. Due to the distance the object was not very big on the photo but could certainly be seen.

Gary got back into the car and the family continued to stare at the object. Deborah had no idea of what it could be, she was mystified by the fact it was hovering completely still in the sky. Her and Gary joked about it being a UFO, but in truth that is exactly what it was. About two minutes went by, then suddenly without warning the object shot vertically upwards at a fast speed. It did this instantly rather than slowly increasing in velocity. In a few seconds the object was completely out of sight and had vanished into the sky. There was no cloud above which it could have been hidden behind, it was just gone. The family were amazed at what they had just seen and wondered how the object could have remained stationary one moment and then moved extremely fast the next.

Later in the day Gary copied the photograph off his camera and was pleased to see that the object had come out on it.

Below is the original photograph of the UFO with the rainbow in the background. The object can be seen in the upper middle of the photo:

Focus on the UFO: 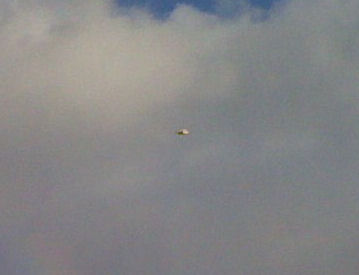 Zoom view of the object with noise reduction: 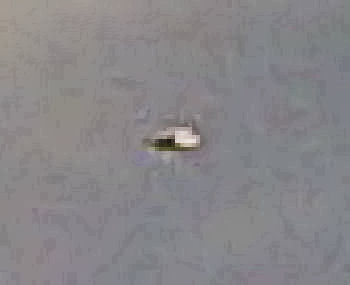 As you can see, the object certainly appears to be solid and metallic or highly reflective. It appears to be a “classic” flying saucer shape, a disc with a raised domed top. The pixilation around it is caused by the resolution of the photo, and is not due to an aura of some kind around the object. The object does not look like a conventional aircraft of any kind or a bird.

On 6th December 2009 I sent the MOD a Freedom Of Information request which stated the following:

"Please can you let me know if you were flying any aircraft, or have records of detecting any unknown aircraft, in the airspace just off the coast of East Beach, Shoeburyness, Southend in early December 2008 (Time approximately 10.05am, exact date unknown)?"

Their response, received on 6th January, read as follows:

"Thank you for your email of the 6 December 2009 requesting information on aircraft activity off the coast of Shoeburyness in early December 2008. This has been considered as a request for information in accordance with the Freedom of Information Act 2000 (FOIA).

The Ministry of Defence (MOD) does hold some records for MOD aircraft that flew in the month of December 2008. However, we will not hold information on non-military aircraft that may have been active in that area.

In order to confirm whether we hold any relevant information would entail the interrogation of individual flight plans for the aircraft movements of over 840 fixed wing aircraft and 470 rotary aircraft based at over 30 MOD flying stations. The number of aircraft movements from each station will vary depending on their role, for example RAF Lossiemouth, which is an operational base with aircraft that deploy on operations, could have as few as 2,500 movements a month whilst a training station such as RAF Cranwell could have in excess of 6,000. An extrapolation for the whole country, based on the movements at a station such as Lossiemouth, indicates that there would be an average of 6,250 movements in a month. With the interrogation of an individual flight plan taking a minimum of five minutes a conservative estimate indicates that in order to identify whether we hold the requested information would entail over 6,000 hours of work; this would exceed the cost compliance limit under Section 12 of the FOI Act.

If you can provide further clarification to your request we can make another attempt to identify whether we hold this information."

This is an absolutely fascinating sighting and one I currently feel has many signs of being genuine. Most explanations for what the object could have been can be disregarded because of the highly impressive manoeuvres observed. The object was able to hover completely still in breezy weather conditions, and then suddenly increase to a dramatic speed and fly straight upwards until out of sight. Most conventional aircraft could not do this, and it is obvious from the photograph and witness descriptions that the object was not a helicopter or military jet. Also if it was, Gary would have certainly been able to hear it when he got out of the car to take the photograph.

Of course it could not have been a bird or meteorite as it remained stationary in the air for two minutes before moving. As there was a breeze at the time it is also very unlikely to have been an inflatable or balloon as these would certainly have drifted in the wind.

There is a Ministry Of Defence owned base a quarter of a mile away from East Beach. Gary believes that it is manned 24 hours a day to watch out for swimmers or kite surfers crossing their boundary. Could the object have been some sort of military drone aircraft being test flown? It seems very unlikely that they would fly this in full view of the public. However, back at the time this is what Gary and Deborah assumed it may have been, despite the fact that it looked nothing like anything they had ever seen before. As you can see in the response from the MOD, they do allude to flying aircraft in that area, but cannot provide specifics - a completely acceptable and understandable reply.

Gary has no reason at all to make up the details of what was observed, they did not report the sighting back at the time to anyone and have at no point attempted to make any money out of it. He comes across as a very down-to-earth and logical man. He has never really thought much about UFOs before and is happy that he has now seen and photographed one for himself.