In most cases of contact, the individuals involved are actually physically visited or taken by ETs. Quite often the beings will not speak with them, or provide them with any information at all. However in this case the opposite seems to have taken place. A man and his daughter appear to have both received information from an ET species visiting the Earth, but have not actually had any face-to-face encounters with them. For a period of months, around the same time they received the information, the witnesses also had many UFO sightings, some of which have been quite impressive.

Neil’s first remembered UFO sighting occurred when he was 7 years old. He remembers being outside soon after his grandmother died, and seeing a glowing light descend from the sky. At the time he thought it was a vision to do with his grandmother's death, but looking back at the incident he wonders if it was instead an early sighting of an ET craft.

In late November 2010, Neil and his partner were out on an evening walk when they witnessed several crescent shaped glowing lights in the sky. There was also a brighter light ahead of the crescents at a higher altitude. Neil has so far not provided any further information about this particular sighting, but if he does so this section will be updated.

On 3rd November 2011 Neil was out in his car in Darlington, on his way back home after collecting his dog from a relative’s house. It was 8.35pm and a clear moonlit evening. He was at the junction between Fulthorpe Avenue and Lunedale Road on the Mowden Estate. As he glanced to the right to turn, he noticed some glowing lights in the sky to the South. They appeared to be over the West Cemetery area about ¼ to ½ mile away. They appeared to be about 2000-3000 feet high. 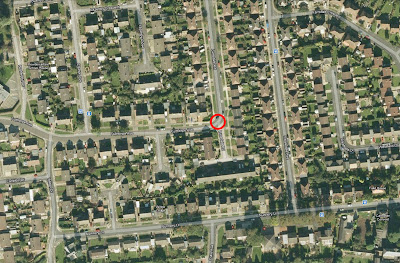 Photograph of the sighting location in the direction the lights were first seen: 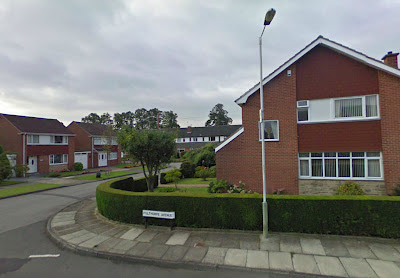 At first Neil assumed they were Chinese lanterns, which he was familiar with, especially as it was only two days before bonfire night. He turned onto Lunedale Road. A few seconds later he realised the lights were moving together in a downward pointing triangular formation at a fast velocity. They appeared to be rapidly descending in a swooping arc towards him. He also noticed that they weren’t the usual amber ora