The following case you are about to read about defies rational explanation. It is certainly a bizarre set of circumstances. The case involves both a UFO and unidentified entities, and is in places quite disturbing.

The incident began in the forest up American Fork Canyon just North of Cascade Springs late evening on 28th October 2010. US army soldier Ben and his friends Timothy and Chris were at a campsite 45 minutes along a dirt track in the mountains overlooking Heaber City. They had a bonfire going at the camp, which lit up the surrounding trees in a fiery glow.

Aerial map of the area where the incident took place, West of Heber: 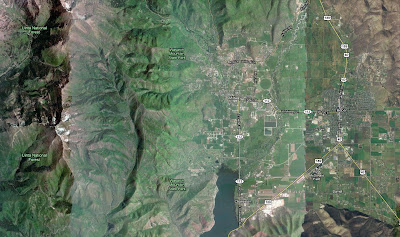 At about 11pm, an orb of white light appeared through the trees. The men estimated it was about 50-60 metres to the East of the campsite. The light split into two and began to move back and forth. It changed colour to red, then to green, then back to white. It then vanished from sight. The men were discussing what the orb of light could be when it suddenly returned and repeated the same sequence. It continued to do this numerous times over the next few hours. At no point did the men decide to walk through the forest and find out what was causing the light, but it was a bit un-nerving.

After a while, the men started to hear crackling noises coming from the trees near to the camp. This sound would come and go and was very distinct. Ben kept on telling himself that it was the sound of the fire bouncing off the trees, but he did not really believe this deep down.

In the early hours of the morning, at least 3am, the orb of light had just appeared and vanished. Soon after it had gone, the men suddenly heard a deep growling sound and movement near to the camp. They thought there was a big animal of some kind nearby, so decided it was a good time to leave. They all got back in the car and started driving back along the dirt road to the South.

After about three miles, Timothy got out a minute to use the bathroom. He headed over to the side of the track, while Ben and Chris remained in the car. Suddenly he noticed two strange looking figures running towards the car out of the darkness from the direction of the campsite. They had something strange up around the shoulders which almost looked like wings. They were moving very quickly in the direction of the car. As it was dark they could not see their features clearly. Timothy ran back to the car and they sped away down the track. Looking behind them they could see that the two figures were giving chase, and somehow were managing to keep up with the car! Ben was very scared and felt that these figures were going to catch up with the car and something bad was going to happen. He could see that Timothy and Chris were also very un-nerved by the situation.

After about 5 minutes, the car reached the main road at the end of the dirt track. As they turned onto the road, something large flew over the top of the car. The soldiers believe that one of the creatures had taken off and flown above them off into the night. The men continued their drive home and discussed what had just happened.

This is a very unusual series of events. Considering the remoteness of their location, it is very easy to see why the men reacted the way they did and why they were so un-nerved. They must have felt quite vulnerable out in the forest after dark with no-one else around.

The colour changing light that the men saw through the trees is very interesting. As the location was so remote it is very unlikely that there would have been any vehicles out there which could have accounted for it, they were nowhere near any settlements. It could not have been a landed helicopter as it kept on vanishing and reappearing for numerous hours. Also they would have certainly heard the rotor blades. Neither of these explanations could explain how the light appeared to split into two. The repeating pattern that the light/lights performed was very unusual, and it is hard to think of a reason why anything, ET or otherwise, would do such a thing, unless it was trying to communicate directly with the men.

The crackling noises heard in the trees were unusual and it is not known whether or not they were related to the light or what happened later. Perhaps it really was caused by echoes from the bonfire, however if this were the case you would expect the noises to be continuous and not come and go.

Could the growl and movement heard have been from the beings that then gave chase? Or was it merely a bear or other animal getting close to the camp? We will probably never know the answer to this question.

The beings themselves certainly sound unusual. Some may immediately dismiss them to be people pulling some kind of practical joke on the men. We must always consider that the entire incident – the unexplained light, the sounds in the forest and the beings were part of an elaborate joke designed to frighten the witnesses. But if the beings were human, then how were they able to keep up with the car as it drove away from the area at quite a speed? And what was it that flew over the roof of the car as they reached the main road?

I hope to soon provide further details of this fascinating case, but so far Ben has not got back in touch after his initial E-Mail, so for now this is all the information that is available.