John Gibson lives in the town of Worlingham in Suffolk. In August or September of 2010 (exact date unknown) he had a sighting of what may well have been a Flying Triangle craft. He knew nothing of this type of craft until he saw one of Richard Hall’s shows recently. After realising this could have been what he saw, he decided to get in touch via Richard’s website. This report covers the details of this interesting case.

It was about 10pm in the evening and John was sitting out on the back patio of his house on Sheridan Walk. It was a mild evening and the sky was completely clear. The sun had gone down and the stars were fully visible. John was facing to the North with a view down the garden. At the base of the garden is a row of trees so he is not able to see clearly into the distance. 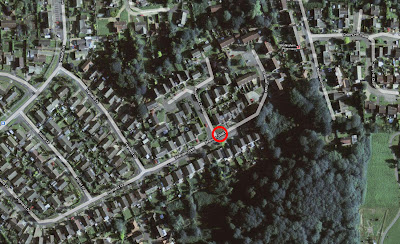 Suddenly John noticed something come into view from behind the tree tops. There was what appeared to be a large triangular shaped object moving towards his location in a South Easterly direction. It appeared to be at quite low altitude, possibly around 1000 feet. It was completely black in colour and could be seen against the sky as it blocked out the stars. There was no lighting or markings on the object visible. John estimates it was about 100 yards across. It was completely silent.

Drawing of the UFO from directly below based on witness description: 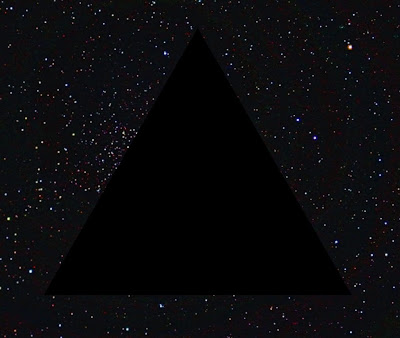 The object was moving at about 100 knots (115 mph) on a level straight course. When John first noticed the UFO it was at an angle of about 50 degrees. However soon it had reached him and flew right overhead. He noticed that it was completely equilateral in shape. The object continued on its way and John jumped up and walked down the garden so he could continue to watch it as it went over the house. After about 20 seconds the object had flown out of sight.

John did not have a camera on him at the time, but he says even if he did the object would probably not have come out as it was black against the night sky.

This is a fascinating sighting, and I feel it may well have been a Flying Triangle craft. Usually this craft type is seen with lights on the base, either at each corner and the centre or right around the edges. The fact that John saw no lights on it is unusual but perhaps it had them switched off at the time for whatever reason. It does not sound like a conventional aircraft of any kind. All planes would fly with lights on after dark, so the fact no lights were seen suggests it was something else. There was also no sound coming from the object even though it appeared to be at relatively low altitude. It is extremely unlikely that someone would be flying a hand glider over the town after dark.

If it was the size that it appeared to be to the witness, then I find it highly unlikely it was an inflatable of some kind drifting on an air current. The path it took seemed too direct and level for this, and remember that it was a very still calm night. It also seems much to large to have been a remote controlled model, and this would almost certainly make sound of some kind.

I feel the most likely explanation for the object is that it was a Flying Triangle craft, which possibly was flying without lights on or possibly didn’t have any lights to begin with. Some believe these craft are an ongoing secret military project but if so this is taking place on a global level. It would also be completely illogical to fly it directly over a populated area in plain sight. I believe these craft are extraterrestrial, and that this could have been a genuine sighting of one.