As far as I am aware, there was only one witness to the unusual object sighted in the sky in August 2005 above Sheldon, Birmingham – my friend Mike (name changed). He has occasionally brought it up in conversation and I decided as I am now a member of the Birmingham UFO Group I would finally get down the full details of his sighting for the record, especially as it occurred in the local area. I invited Mike over to my house on 13th June, which is where I conducted the interview about what he witnessed several years ago.

The sighting began in the early evening of a Saturday in August 2005 in the suburban area of Sheldon. As it occurred so long ago, Mike could not give me the specific date. It was a clear, calm and sunny evening, around 6pm, and he had stepped out onto the front drive of his house for a cigarette. He suddenly noticed a strange buzzing noise coming from the sky. Looking up to his right he spotted a very strange flying object above the nearby houses of Burleton Road. It looked like a silver coloured cigar shaped object, with a brown ball sitting on top of it at each end. Jon estimates the object was about 20 foot in length and was hovering about 50 foot in the air. He was confused as to what it could possibly be, and why it was making the unusual buzzing sound. The object was already moving in a straight line away from him when he spotted it, and it remained at a slow speed for the duration of the sighting. However the strangest thing was that it seemed to be slowly rocking left and right on it’s axis. He watched the unsual object for about a minute until it went out of sight behind the houses. He did not think to follow it but was mystified by what he had seen.

Map showing position of witness and path of UFO: 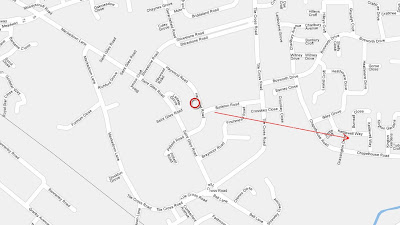 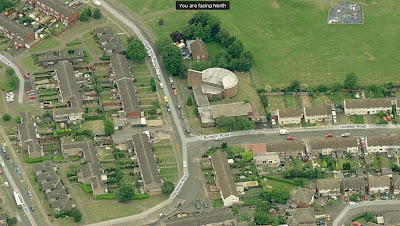 Mike seems completely open about what he saw, and I have no reason to believe he would make anything up. He was excited to tell myself and my brother about it soon after he witnessed it , as he knew we had an interest in UFO’s. He feels privileged to have seen something, but to this day has no real explanation as to what it was. He thought at first it could have been something radio controlled. There is a park right next to the roads where the sighting took place. Could someone have been flying an unusual model of some kind? This would have explained the buzzing noise it was making. However this seems unlikely due to both the size of the object, and the fact that Mike could not make out any propellers or other means of flight. If it was a balloon or kite of some kind, then why did it make a buzzing sound? Also he said it’s movement pattern seemed too regular to be a balloon, for example the strange but constant rocking of it. Other more mundane explanations are hard to fathom due to the very odd shape of the object.

We may never find out what the strange object that Mike sighted back in 2005 was. I checked the internet for other sightings from the area to see if there were further witnesses, but this came up a blank. The most unusual feature of this sighting was the brown ball shapes sitting on top of the main cigar-shaped part of the object. A while back in UFO Magazine I remember reading about a similar shaped object, however there were four balls sitting on top of it rather than two. There is still the possibility that the two objects were related in some way. Without an accurate date of the sighting it is hard to take the investigation further at this time.