In December 1980  something astounding took place in the area of Rendlesham Forest, Suffolk. Over three consecutive nights there was repeated UFO activity witnessed by many individuals. This became known in UFO lore as the Rendlesham Forest Incident, and is widely regarded as some of the best evidence for the reality of the subject. Ever since the incident many people have come forward to claim that they too have witnessed strange phenomena in the forest, and some believe it to be an area of ongoing activity.

Towards the start of March 2012 BUFOG received details of numerous UFOs which were seen by two witnesses named David and Dave on the edge of Rendlesham Forest back in August 1988. These UFOs may or may not have been the same object. Over numerous E-Mails from David the full details of this incident came to light.

David has always had a fascination with the UFO subject since an early age. In 1988 in his early twenties, he read the book Skycrash: A Cosmic Conspiracy by Brenda Butler. This inspired him to travel down to Rendlesham Forest in August 1988 with a friend to try and locate the landing site. They were able to do so. While they were there in the forest, David had the strange and unpleasant feeling of being watched. Something did not feel right. Many others have reported this sensation in the area.

As it began to get dark they decided to take their leave and head for home, quite a distance West of their current location. It was a clear night and the stars were visible above them. They got back into their van and began to drive out of the forest. They left the visitors car park, got back onto Woodbridge Road and began travelling due West towards Bromeswell. 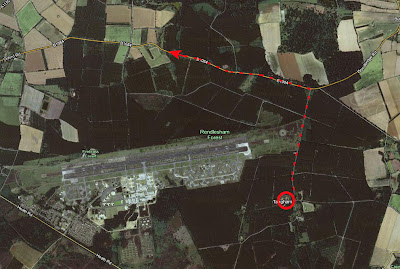 When they were nearing the edge of the forest, David asked his friend to stop so he could get out to use the loo. While he stood near to the car, suddenly a very bright sphere of constant white light flew over his head. There was no trail behind it. It looked quite small in size, perhaps a couple of feet in diameter. It was at high altitude but he was in the atmosphere, about a mile up. It was moving on a straight course at quite a fast speed, about as fast as a jet. It was too slow to be a meteorite. David was shocked by the sudden appearance of this object and after observing it for about 20 seconds he jumped back into the van. He told his friend to continue driving home.

Photograph of the possible location where David may have sighted the orb (David cannot clarify whether or not this is accurate as he did not pay much attention at the time): 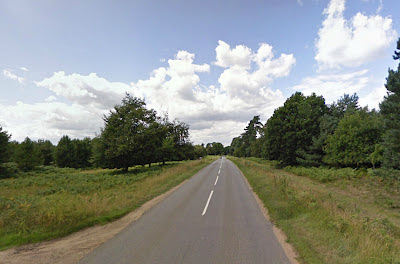 About a mile further along the road, a dimly glowing long bar of orange light suddenly appeared to the left of their vision. It appeared to be around 30 feet in length. It flew across the road in front of them at a slow speed, roughly 30-40 mph. As it moved it slowly descended. It continued on this path and descended into some open fields on the right side of the road. Both David and his friend clearly saw this. His friend wanted to stop but David was un-nerved by the appearance of this second object. In response to his friend’s suggestion he said “No way – let’s get out of here!”

Witness drawing of the orange bar added to a photo of a road at night as a representation of what was seen: 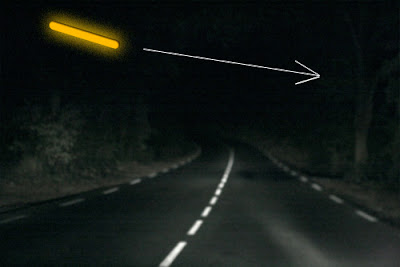 His friend sped up the car. As they drove alongside where the object had descended, he suddenly exclaimed “What the hell is that?” David peered over his friend off to the right side of the road. There over the field at low altitude was what looked like a manta ray shaped object, surrounded in a thin glowing cloud. It was about ¼ mile from their position and again appeared to be about 30 feet across. The main body of the object appeared to be dark grey in colour. There were several beams of “solid looking” light coming from the front of the object. These were extremely bright. They lit up the surface of the object and also reflected back off the cloud surrounding it. When it first appeared the object was facing West, in the same direction they were driving. However as they watched it began turning towards their direction and also moving closer to the road while continuing to descend. 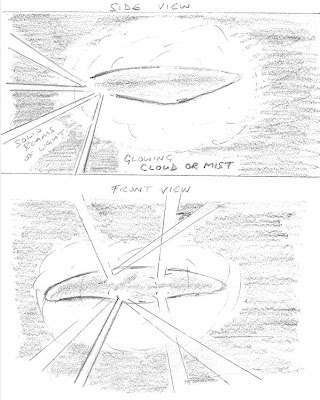 Aerial map showing the estimated location of the orb sighting (A) and of the manta shaped UFO (B): 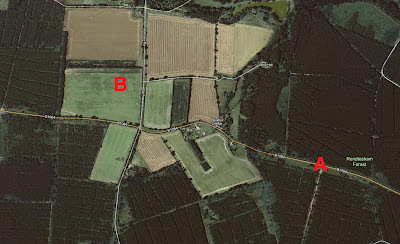 Photograph of the fields over which the manta shaped UFO is believed to have been seen over: 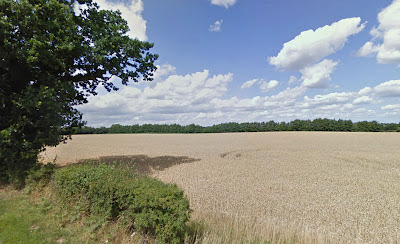 Both men were frightened by the presence of the object. Dave drove extremely fast away from the area. As they did they looked back several times until their view was blocked by trees. In total they had observed the object for about 45 seconds. They stopped the car about a mile further down the road when they reached one of the first houses of Bromeswell. Now they were far away they felt safer, and got out to look for the object, but it was no longer visible and their view was largely blocked by willow trees. 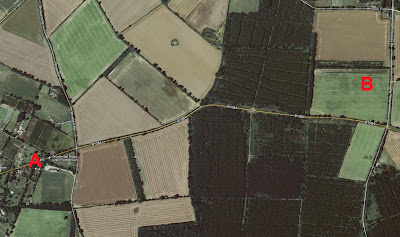 Photograph showing the estimated location where the witnesses stopped facing in the direction of where the UFO had been sighted: 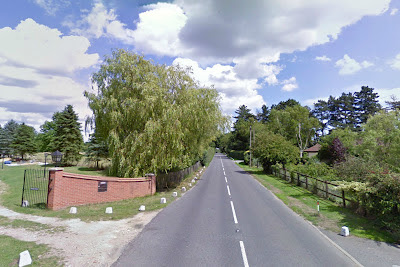 Shaken up, they got back in the car and continued their drive home. David was left with the distinct impression that they had been given a demonstration of some kind – that they were being shown on purpose for some reason.

Looking back on the incident, David has a bit of a mental block surrounding part of the incident. He cannot currently remember part of the journey home. After leaving Bromeswell the first village he remembers them reaching in the car is Sudbury. However in checking a map, it is clear that they would have definitely had to pass through Woodbridge, and then probably Ipswich and Hadleigh prior to reaching Sudbury (unless they took a bizarre and long-winded route).  He wonders whether anything else may have taken place which he cannot currently remember for whatever reason, however he does not wish to find out whether this is the case or not.

Aerial map showing the distance between Rendlesham Forest (A) and Sudbury (B): 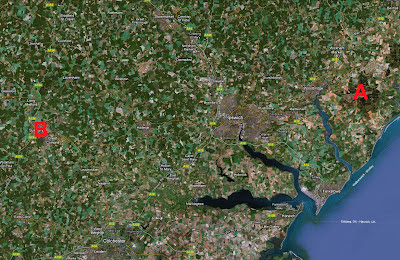 Let me start by saying how impressed I am with the information David has sent through and the way in which he has done so. As with all reported cases, one should always be wary of possible hoaxes. Initially he did not leave any contact details so we only had certain information to go on. While this was not in any way suspicious, it did mean that I could not really vouch for the authenticity of the details provided, especially considering the location where the incident took place. However since then David has come back with further information off his own back more than once. He has provided drawings and also answered my questions sufficiently. The information he has provided both initially and in follow on correspondence certainly sounds authentic, and includes many incidental and trivial details that make it all the more believable. Also David has directly stated that he does not want any attention or credit for providing the information, he just feels that it should be shared because of where it happened. This is one of the reasons why he did not initially provide me with contact details.

The glowing orb of white light seen initially could not have been a Chinese lantern as it was moving too fast, was constantly bright and the wrong colour for a lantern. It was also unlikely to have been a white LED balloon due to the speed of movement and the fact that these have only been widely available for the last few years. As David pointed out, the object was moving too slowly to have been a meteorite. Could it have been a jet aircraft flying at high altitude? This cannot be ruled out, however surely the sound of the plane would have been heard after dark, and it is likely that other navigation lights would have also been seen if this were the case.

The orange bar of light is even harder to explain. This appears to have had a definite form. It was moving too slow for the bar shape to have been caused by velocity distortion. It was moving much too slowly to have been a meteorite, and was clearly not a conventional aircraft. It certainly seems to be linked to the structured object which was seen over the field as this is where it descended to. David wonders if it was lighting on the object which was then no longer visible because it had turned, or could even have been switched off. Another possibility is that it was some kind of glowing energy which masked the actual appearance of the UFO until it was over the field. It could even have changed physical form. We are unlikely to ever know for sure.

The manta ray shaped solid object seen over the field is fascinating and certainly seems out of the ordinary. It was clearly not a low flying helicopter due to the appearance, and it sounds like it was too large to have been an inflatable or model of some kind. The glowing cloud surrounding it and beams of light emerging from the front are both very intriguing aspects that do not seem to fit a mundane explanation. It was actually up in the air and still descending as the witnesses past it in their car, so it could not have been a vehicle on the ground with headlights on.

As a comparison, David stated that the shape of the UFO reminded him of the flying sub from the old TV series “Voyage To The Bottom Of The Sea”: It should be noted that some of the aspects of this case can be linked back to descriptions from the Rendlesham Forest incident. The glowing cloud surrounding the manta ray shaped object, and the way in which the UFO possibly changed form from a light into a solid craft, both have similarities to things Larry Warren described seeing on the 3rd night of the Rendlesham Forest incident of December 1980, although the craft was completely different.

This appears to be another stunning sighting of unexplained objects in and around Rendlesham Forest. In some ways it has as much importance as what took place back in December 1980, although clearly there were far fewer witnesses and we only have David's testimony to go on. However this case does provide more evidence suggesting that there is ongoing activity in the area.

The UFO or UFOs described above were not the only time David has seen UFOs. When he was 15 years old he and some friends had a stunning sighting of a disc-shaped UFO over Kettering. This appears to have been only one of many sightings reported around the time. On 4th July 2012 David also had a possible Flying Triangle craft alongside another witness. There are seperate case reports based on these incidents.