In April 2011 I was contacted by a man who used to live in Canada but has since moved to the UK. He got in touch with me via Richard Hall’s website. The man wishes to remain anonymous so for the purpose of this report I will name him Mark. He shared details of a fascinating UFO sighting which had happened not to him, but to a friend of his back in August 1987. However these details would cover not only the incident itself, but also the fact that his friend became ill and died a number of months later, and that it was believed that his close encounter with the UFO had been the cause of this.

This report covers what Mark has shared with me about what took place. I spoke with him both via E-Mail and directly over the phone for quite a while, and I have no doubt that what he has said actually took place.

It was a clear and sunny day in August 1987. Simon (name changed for privacy reasons) and a friend were out playing golf at Lingan Golf and Country Club, on the outskirts of Sydney, Nova Scotia. Simon was 27 years old at the time. It was between 2-3pm in the afternoon. 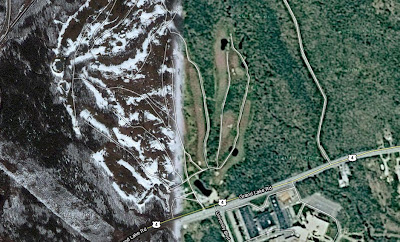 Photograph of the entrance to Lingan Golf Course: 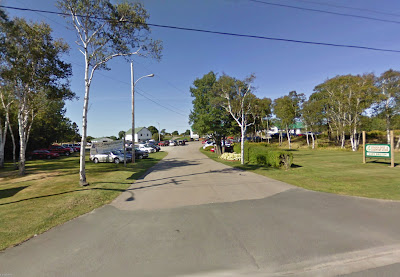 They glanced up into the sky and were amazed to see two pewter coloured saucer shaped craft heading in their direction. The craft looked identical. They had an outer rim with a raised domed centre, around which were what appeared to be portholes. They were between 40-60 feet in diameter. On the centre of the underside of each of the craft was a revolving ring of pulsing white lights. Around this ring was a second metallic ring that was also revolving. They moved in perfect unison with each other. The UFOs were at quite low altitude, flying between 60-80 feet high.

Drawing of one of the UFOs based on description given: 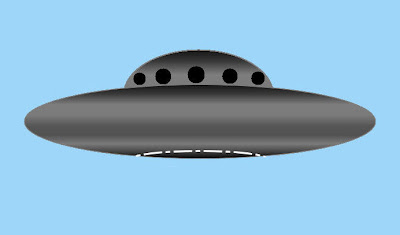 The men then noticed several CF 18 jet fighters at a distance behind the UFOs. They appeared to be trailing them and attempting to intercept them. The jets were moving faster than the saucers, and slowly gaining on them. When they began to get near to them, they changed formation. The centre jet assumed a position at the front while the other two dropped back behind.

Suddenly the saucers massively increased in speed and flew across the golf course towards them. They then came to a halt directly over their heads. Now that the UFOs were near to them, they could hear a low humming sound coming from them. They noticed that in the base of each craft was a revolving ring of pulsing white lights. Around this was a second metallic ring which was also revolving in a clockwise direction. It felt like the air was filled with static electricity.

The saucers remained over them for a short while. As the jets seemed to be closing in on them again, both UFOs suddenly shot straight upwards, before coming to a stop then flying away to the right at an extremely fast speed. It made the jets appear like they were standing still. They left the area leaving the jets behind. Simon and his friend watched as the jets flew away into the distance. 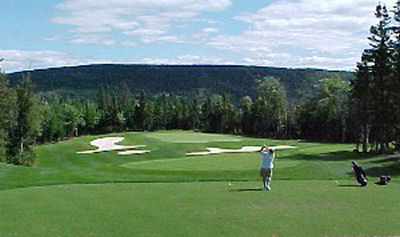 After Effects and Witness Testimony

Within 6-8 months of the incident, Simon became ill. There were aspects to it which suggested it had been caused by his close encounter with the UFOs.

A short while after he became ill, Simon decided to share with his friends the details of what had taken place. This seemed to have been brought on by the fact that his brother purchased a book on the subject by Timothy Good. He met up with a group of his close friends, Mark included, and then related to them the details of his experience. Mark says that while he recounted his story his hand became very animated, it was clear that he was talking about a real incident and that even so long after it he was still extremely shocked by what he had witnessed.

Within six months Simon unfortunately passed away. Both he and his family believed that his illness and eventual death had been caused by his relatively close encounter with the UFOs. Understandably they still feel very strongly about what took place, so I have been asked not to reveal details of the illness at present.

This is an absolutely stunning case, with a daylight sighting of objects which were clearly advanced craft, military involvement, and after effects which back up the fact something took place. Mark was very adamant that it was a real incident; he says that Simon was a very fact driven man and that he would certainly not have made up such a story. The way that he spoke of the incident and his obvious feelings towards it convinced Mark that it took place, and actually changed his views on the UFO subject.

The objects that Simon and his friend saw that day were almost certainly advanced craft, probably of extraterrestrial origin. They could not have been radio controlled models or inflatables due to their size and the incredible manoeuvres they were seen to perform. The fact that the military jets were attempting to intercept the objects also means they were very unlikely to have been experimental secret military craft. It is clear from what Simon revealed that they were attempting to catch up with the UFOs to either observe them or perhaps even attempt to shoot them down. Mark is an aviation expert, and says that the jets must have come from Bagotville Airport, a good 17 hours drive from Sydney. This was the only known base which would have had CF 18 jets that far East. It is probable that they picked up the craft on radar and sent up jets to intercept them.

Aerial map showing location of Bagotville airport (A) and Sydney (B): 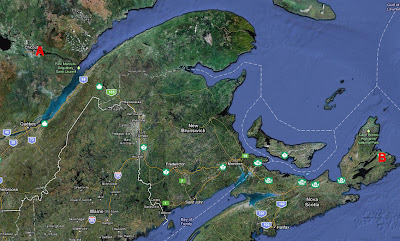 Many of the aspects of this encounter fit in with other UFO sightings I have read about or personally investigated. The ability of the objects to hover completely still or suddenly move at massive speed. The low humming sound coming from them. The ring of revolving lights in the base. The feeling of static electricity in the air. All of these have been talked of before in other close encounter experiences. It is my belief that the electrical feeling was due to the gravitational fields the UFOs were projecting around them, which allows them to perform the manoeuvres they were seen to perform. This has been noted numerous times before, including during the famous Rendlesham Forest incident when Jim Penniston and John Burroughs approached the triangular craft in the woods.

It is very unfortunate that Simon became ill and died from this illness. It would have been incredible to hear the story of what happened from him directly. However the fact that he became ill and passed away provides further evidence that the experience really took place. It was at least half a year after the encounter that this illness began, but that does not mean it was unrelated, its early stages may not have been noticeable. I have heard of individuals becoming sick after having close encounters with these craft, this is far from a unique case regarding the after effects. People have reported radiation burns, nausea and strong headaches, and I see no reason why the illness and death of Simon could not have been caused by his experience. It is something that his family certainly believe to this day.

Mark does not know what happened to Simon’s friend who also witnessed the craft, although he does not believe that he too died. While still alive Simon kept in touch with him even after he moved away from the area. Mark says he will attempt to find out his contact details so I can speak with him. Also he says I may be able to speak with Simon's brother, if so this report may be updated with further details on this fascinating case.